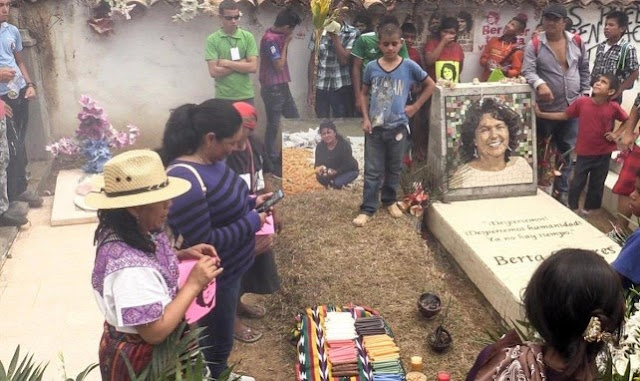 Indigenous Lenca water protector Berta Cáceres was killed in March 2016, less than three months after the COP21 climate summit, for her opposition to the Agua Zarca hydroelectric dam on the Gualcarque River in Honduras. Photo by Carlos Castro.

The just-released 20-page draft of the final declaration of the COP27 summit fails to reference environmental human rights defenders.


That resolution was adopted in March 2019. At least 639 land and environmental defenders have been killed since then.

Between 2012 and 2021, Global Witness has also documented that more than 1,733 land and environmental defenders have been killed.

On pages 4-5, the draft declaration section on “Human rights and human approaches to climate action” only “recognizes the important role of indigenous peoples, local communities, cities and civil society, including youth and children, in addressing and responding to climate change, and highlighting the urgent need for multilevel and cooperative action.”

On pages 18-19, the section on “Action by non-Party stakeholders” mentions “youth and children, women and girls, cities and local communities, indigenous peoples”.

And yet, the draft declaration highlights in a single-bullet point item in the “Engagement of the private sector” section that “affirms that achieving the objective of the Convention and the long-term goals of the Paris Agreement requires extensive collaboration among all levels of government, the private sector and civil society.”

There are at least 636 oil and gas lobbyists present at the COP27 summit.

Canada’s official delegation to COP27 includes executives from Enbridge (that set up a fund for US police to access to arrest and surveil defenders opposed to the construction of the Line 3 tar sands pipeline) and the Royal Bank of Canada (that is financing the construction of the Coastal GasLink fracked gas pipeline on Wet’suwet’en territory that has seen more than 74 people arrested in three militarized raids).

On November 18-19, 2021, the Royal Canadian Mounted Police (RCMP) launched a militarized raid on Wet’suwet’en territory despite the United Nations Committee on the Elimination of Racial Discrimination repeatedly calling for the RCMP and private security to leave the territory. Photo by Dan Loan.

The Guardian also reports the draft declaration “does not call for a phase-down of all fossil fuels [nor does it] include details for launching a fund for loss and damage, a key demand from the most climate vulnerable countries such as island nations.”

Greenpeace International notes “the draft text is an abdication of responsibility to capture the urgency expressed by many countries to see all oil and gas added to coal for at least a phase down”, 350.org highlights the text does not reflect the call “for a just, equitable and managed phase-out of all fossil fuels” and Stand.earth says the “phase down ‘unabated coal’ is still in but ‘unabated’ is a loophole big enough to drive a drill rig through”.