Article by Brenda Norrell
Censored News
Saami at Oceti Sakowin camp in 2016 joined the global force of Water Protectors. Today, Saami in the far north in Russia risk their freedom and safety to protect their ancestral lands from mining and oil and gas drilling.

“Extraction of natural resources is Russia’s key business, and Indigenous people are its competitors, unwanted witnesses, they stall it,” says activist Berezhkov, who was granted asylum in Norway in 2013 after years of threats, surveillance, interrogations and alleged fraud charges.

Read the article at Al Jazeera: 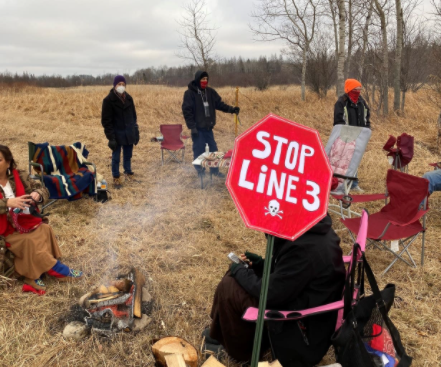 Water Protectors resisting Enbridge's Line 3 at Bagley, Minn. Photo courtesy Minnesota Public Radio.
PIPELINE GIANT ENBRIDGE USES SCORING SYSTEM TO TRACK INDIGENOUS OPPOSITION
On a color-coded map, land belonging to Native tribes that opposed the Line 3 pipeline were marked in red — areas of “threat” to the bottom line.
New at The Intercept:
Enbridge's tracking system of Indigenous Water Protectors.
"AS PART OF its efforts to build and operate pipelines, the oil transport company Enbridge used a tracking system that identified Indigenous-led groups as key threats," reports Alleen Brown.
Enbridge worked with police and tracked Indigenous-led pipeline resistance groups such as Camp Migizi, Giniw Collective and others protecting the water and land from Line 3 and Line 5.
"Enbridge, for example, bought land near the headquarters of an Honor the Earth project — miles away from the company’s pipeline. After the purchase, Honor the Earth employees repeatedly spotted drones around the property, which LaDuke suspected were for keeping an eye on the group."
Read the article at The Intercept:
https://theintercept.com/2022/01/23/enbridge-pipeline-line-3-tracking-indigenous-protesters/
TigerSwan spy documents to be released by North Dakota court
A state judge in North Dakota ruled Friday that the release of documents of TigerSwan will not be delayed, and will be released to the public. The 16,000 documents involve the surveillance of Water Protectors at Standing Rock, and the role TigerSwan performed in directing militarized police, resulting in critical injuries to Water Protectors.
TigerSwan's employer in North Dakota, Energy Transfer, owner of Dakota Access Pipeline, is in court to prevent the release of the documents. North Dakota ruled that TigerSwan operated in North Dakota without a license.
The North Dakota judge said on Friday, Jan. 21, 2022, that the documents are public and will be released.
https://apnews.com/article/north-dakota-dakota-access-pipeline-252ea2d268cf753897deb69a723239e8
'Buy a Badge' Scheme -- Pipelines pay off law enforcement to halt Water Protectors
After Standing Rock resistance to the Dakota Access Pipeline, Energy Transfer was charged with bribing law enforcement, constables, to halt the resistance to The Mariner East 2 in Pennyslvania.
In Minnesota, however, Enbridge pipeline found a way to legalize the pipeline working with police and sheriffs deputies -- in order to stalk, brutalize and arrest Water Protectors resisting Line 3.
In Pennsylvania, it was a crime for the pipeline to pay off law enforcement.
"Energy Transfer allegedly paid the constables a total of $804,590 between September 2017 and February 2019, according to the complaint, 'for the purposes of bribing Pennsylvania State Constables to use the authority of their office.'
Energy Transfer was charged with hiring constables to guard The Mariner pipeline and hiding the payments.
"Energy Transfer security manager, two contractors for the security firm TigerSwan, and two former state troopers for involvement in what his office called a 'buy-a-badge scheme,'" Alleen Brown reports in The Intercept.
Read Alleen Brown's investigative series, 'Policing the Pipeline,' at The Intercept. Here are links to the full series:
https://theintercept.com/series/policing-the-pipeline/
at January 24, 2022 No comments: