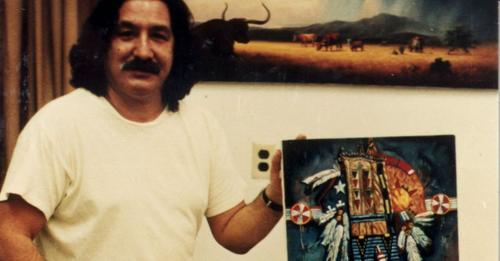 The ailing 77-year-old Native American rights activist has been pleading for help in prison and was never given a coronavirus booster shot.
By
Jennifer Bendery

Leonard Peltier, the ailing 77-year-old Native American rights activist who has been pleading for help from prison amid coronavirus lockdowns and still hasn’t received a booster shot, has tested positive for COVID-19.

“Today, Leonard tested positive for COVID,” Peltier’s attorney Kevin Sharp told HuffPost late Friday. “We are all very concerned, as is Leonard. He wanted people to know that he sends his love and appreciation for the years everyone has fought for him. And should he make it through this, he intends to continue speaking out for Native rights.”

Peltier began feeling “like shit” on Thursday and had a “rough night” of painful and persistent coughing, Sharp said. “He told me, ‘I hope this is just a bad cold, but I have never had a cold like this before.’”

Peltier has now been placed in quarantine for 10 days.

Peltier has been in prison for 45 years without any evidence that he committed a crime. The FBI and U.S. Attorney Office charged him with the 1975 murders of two FBI agents during a shootout on a Native American reservation ― something he has long said he didn’t do, even when it meant he could have been paroled if he’d said he did. His trial was riddled with misconduct, and even the U.S. attorney who helped put Peltier in prison decades ago is now pleading with President Joe Biden to grant him clemency because, he says, federal officials never had evidence that he committed a crime.

Read the article at HuffPost

Jailed Native American activist Leonard Peltier has described prison as a “torture chamber” amid constant coronavirus lockdowns. Peltier, who suffers from multiple health conditions, says he and others held at the Florida federal prison have yet to receive their COVID booster shots and describes worsening neglect and uncertainty. In a statement, Peltier writes, “Left alone and without attention is like a torture chamber for the sick and old.” Seventy-seven-year-old Peltier is one of the U.S.'s longest-serving political prisoners, convicted of killing two FBI agents on South Dakota's Pine Ridge Reservation in 1975. He has long maintained his innocence.

Nevada and Canada: Laboratories for Genocide and Death

New at Censored News Today:
The United States government hid its crimes in the beginning, leaving a trail of death for Western Shoshone during its secret atomic bomb testing.
We know now that Nevada is blanketed with the crimes of the U.S. government, from nuclear tests to the bombing ranges and lithium mining that Paiute Shoshone Myron Dewey warned of the day before he was killed by a driver pulling into his lane.
The crimes go further, with the drone pilots at Creech Airforce base pulling the switch and carrying out assassinations on the other side of the world, often using faulty data.

While Nevada continues as a laboratory for death, at the same time, in what is called Canada, the truth is being revealed about the role of Canada and the churches in the widespread kidnapping, torture, and murder of Native children in the schools where the children were incarcerated.
Mohawk Mothers are holding McGill University in Montreal accountable in court, as the search continues for unmarked graves.
At McGill University, Canada and the U.S. CIA conducted MKUltra mind control and torture experiments. Mohawk children were among the victims.
Western Shoshone Ian Zabarte to the White House today: "Our nation has, and is, being destroyed by nuclear weapons testing and nuclear material disposal."
"The pattern and practice of the Department of Energy and cooperating agencies inflict conditions intended to bring about the destruction of Shoshone Nation, violating peremptory norms in International Law that the United States has acceded to under the Proxmire Act in 1988 (18 USC 1091--GENOCIDE)." -- Comments of Principal Man Ian Zabarte of the Western Bands of the Shoshone Nation of Indians to the White House Environmental Justice Advisory Council, January 27, 2022
https://bsnorrell.blogspot.com/2022/01/western-shoshone-to-white-house-our.html

Mohawk Mothers continue their case against McGill University in Montreal, where Canada and the U.S. CIA conducted MKUltra mind control and torture experiments on Native children at Allen Memorial Institute.
"In the middle of this case, super-paid Principle and Chancellor of McGill, Suzanne Fortier, resigns! Also one of the lawyers in the FCC Federal Court of Canada v. the Mohawk Mothers suddenly resigns from the case." "The main issues in the court case are the unmarked graves, the trespassing on Mohawk land, and the borrowing of Iroquois Trust Funds to build McGill that was never repaid to the Mohawks."
https://mohawknationnews.com/blog/2022/01/27/mcgill-dodging-dipping-goes-on-audio/
Horrific abuse described as unmarked graves discovered of Native children in Canada
This week, more unmarked graves were discovered at a residential school in Canada. The Tyee describes the horrors and abuse of Native children carried out by the government of Canada and the church at Williams Lake.
“Our team has recorded not only stories involving the murder and disappearing of children and infants. They have listened to countless stories of systematic torture, starvation, rape and sexual assault of children at St. Joseph’s mission.”
Children were beaten until they lost consciousness for speaking their Indigenous language.
https://thetyee.ca/News/2022/01/25/Williams-Lake-Findings/ 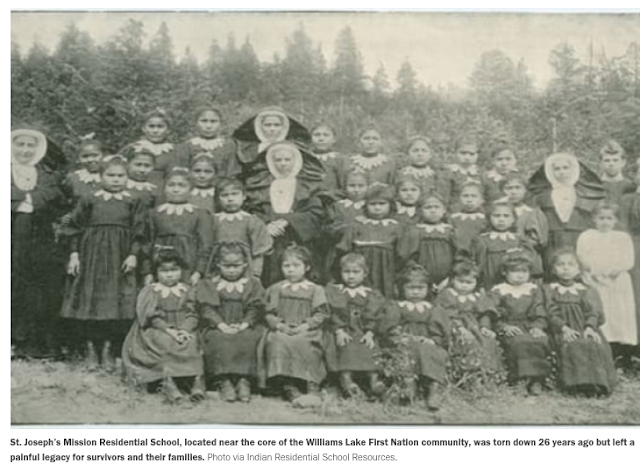 The Guardian: Life as a drone operator at Creech Airforce Base, Nevada
https://www.theguardian.com/world/2015/nov/18/life-as-a-drone-pilot-creech-air-force-base-nevada
at January 28, 2022 No comments: