In Defense of the Sacred
Ofelia Rivas
O’odham Traditional and Ceremonial Leaders from O’odham Lands
Censored News
Years of defending our homelands and ways of life, continue today with the United States Commander in Chief leading the attack. This is a strategy to continue the legacy of the United States government.

As original peoples of Turtle Island it is not in our human concept and humanity to disturb human remains and human historical ancient communities for extractive industries gains.
The lands have been greedily pillaged and raped for silver, gold, coal, uranium, lithium, borax, oil, and numerous other natural elements for the production of so-called human evolution.
The atrocity of death of whole societies of original people, and the torture and dehumanizing of original people on Turtle Island, is the genocidal history the United States government.

In the O’odham historic ancient community Oak Flat region, there is the latest attack. It is an attempt to erase the existence of an advanced and extensive culture that existed for many thousands of years,  before carbon testing, and long before anthropologists and all its subcategories, and ethnologists' theories, on human cultures on Turtle Island.

In this 21st century, world organizations recognize, and world states and local governments have created written laws and regulations with protocols, to protect places of historic significance and ancient burial places.

The mining company Resolution Copper of Australia plans to cover up an ancient O’odham historic cultural community with mining tailings.
In this century, the United States and Mexico border contractors dug up O’odham human remains to erect the vehicle barrier in 2006. In 2021, Elbit Systems spy towers were constructed and erected ignoring opposition from the descendants, traditional and ceremony O’odham to protect an ancient community and burial place.
As well, the City of Phoenix is removing over 700 O’odham ancestral remains to build an apartment complex. A united effort stopped Canadian Rosemont Copper from the destruction of our ancient cultural site 30 miles southeast of Tucson.

This is evidence that state governments --  which include partnering countries, the United States and local governments -- have manipulated written protective laws for the benefit of industries, and continue the legacy concept of neo-capitalism.

Today, I stand to defend all life, plants,  animals, water, and air to say stop Resolution Copper from destroying 14,218 acres of land.

Today, again I stand with the Elders and ceremonial people to say we oppose Resolution Copper's mining plans to destroy and erase our historic ancient proof of our united and vast societies of O’odham. We are the descendants of the Greater Huhukam culture.

O’odham Traditional and Ceremonial Leaders from O’odham Lands
---
Apache Stronghold presented its case to the Ninth Circuit Court of Appeals in San Francisco this week for rehearing the case to protect Oak Flat from Resolution Copper's planned copper mine on ceremonial land at sacred Oak Flat. The Biden Administration, in disregard for Native American Religious Freedom laws, opposed rehearing the case. The U.S. Justice Department urged the federal court to proceed with the copper mine on sacred land. Apache Stronghold is now awaiting the court's decision. -- Censored News, Sept. 8, 2022
Copyright Ofelia Rivas, Censored News, no portion may be used without written permission.
at September 08, 2022 No comments: 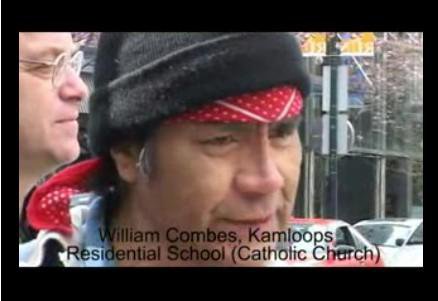 Update: William Combes died of lethal injection at St. Paul’s Catholic hospital in  Vancouver on February 26, 2011. Genocide survivor, an eyewitness of killings and of the abduction of ten aboriginal children by the Queen of England and Prince Phillip on October 10, 1964, at the Kamloops Catholic residential school.
VANCOUVER, Canada -- The aboriginal man who claimed to witness the abduction of ten fellow residential school children by the Queen of England and her husband in October 1964 at the Catholic school in Kamloops, B.C. has died suddenly at the Catholic-run St. Paul's Hospital in Vancouver.
William Combes, age 59 and in good health, was scheduled to be a primary witness at the opening session of the International Tribunal into Crimes of Church and State (ITCCS) on September 12 in London, England. I last saw William ten days ago, on the eve of my departure for a European speaking tour, and he looked better than I had seen him in years.
According to his partner Mae, William was in stable health and was assigned a new doctor at St. Paul's Hospital this past week. William was then committed to the hospital for "tests", and his health began to immediately deteriorate. He died suddenly yesterday of a still-undisclosed cause.
The Vancouver Coroner's Office refuses to comment on William's death. William was the sole survivor of a group of three aboriginal boys who claim to have witnessed the abduction of ten children during a royal visit to the Kamloops residential school in mid-October, 1964 when both the Queen and Prince Philip were in Canada.
"They took away those ten kids and nobody ever saw them again" described William, in several public statements made over the airwaves of my former Vancouver Co-op radio program, and in the following signed and witnessed declaration made on February 3, 2010:
William Combes statement:
"I am an Interior Salish spirit dancer and am 58 years old. I live in Vancouver, Canada. I am a survivor of the Kamloops and Mission Indian residential schools, both run by the Roman Catholic church. I suffered terrible tortures there at the hands, especially of Brother Murphy, who killed at least two children.
"I witnessed him throw a child off a three-story balcony to her death. He put me on a rack and broke some of my bones, in the Kamloops school basement, after I tried running away. I also saw him and another priest burying a child in the school orchard one night.
"In October 1964 when I was 12 years old, I was an inmate at the Kamloops school and we were visited by the Queen of England and Prince Phillip. I remember it was strange because they came by themselves, with no big fanfare or nothing. But I recognized them and the school principal told us it was the Queen and we all got given new clothes and good food for the first time in months the day before she arrived.
"The day the Queen got to the school, I was part of a group of kids that went on a picnic with her and her husband and some of the priests, down to a meadow near Dead Man’s Creek. I remember it was weird because we all had to bend down and kiss her foot, a white laced boot.
"After a while, I saw the Queen leave the picnic with ten children from the school, and those kids never returned. We never heard anything more about them and never met them again even when we were older. They were all from around there but they all vanished.
"The group that disappeared was seven boys and three girls, in age from six to fourteen years old. They were all from the smart group in class. Two of the boys were brothers and they were Metis from Quesnel. Their last name was Arnuse or Arnold.
"I don’t remember the others, just an occasional first name like Cecilia and there was an Edward. What happened was also witnessed by my friend George Adolph, who was 11 years old at the time and a student there too. But he's dead now," Combes said.
---
I believe that William Combes died of foul play, and that his murder was arranged by those who stood to lose from his speaking out about his witnessing of the child abductions and other crimes of murder and torture at Catholic Indian residential schools.
I am writing a soon-to-be-issued eulogy for my friend and fellow fighter, William Arnold Combes. Like another murdered front-line native activist, Johnny Bingo Dawson, who was killed by the Vancouver police in 2009, William will never be forgotten - and those who killed him will, like the system that caused the death of so many children, be brought to real justice.
His murderers have not won. William's videotaped statements, including his witness of the 1964 abductions, have been registered in the archives of our ITCCS, and will be made public at our opening session on September 12, 2011. I will be proposing to the ITCCS executive that William Combes and Johnny Dawson both be named post-humous Honorary Elders of the Tribunal. In his name and memory, and for all the children.
See the evidence of Genocide in Canada at www.hiddennolonger.com and on the website of The International Tribunal into Crimes of Church and State at www.itccs.org . Watch Kevin's award-winning documentary film UNREPENTANT on his website www.hiddenfromhistory.org
at September 08, 2022 2 comments:

“Oak Flat is like Mount Sinai to us—our most sacred site where we connect with our Creator, our faith, our families, and our land. It is a place of healing that has been sacred to us since long before Europeans arrived on this continent. My children, grandchildren, and the generations after them deserve to practice our traditions at Oak Flat.”

Below is the U.S. government's opposition to the protection of Oak Flat, opposition to upholding Native American Freedom of Religion Rights, and pressuring the court to give open access to Resolution Copper's mine.

FOR THE NINTH CIRCUIT