Indigenous Peoples battle for their lives, and others, on US borders

“No one should die for want of a cup of water,” Wilson said, after replacing two of the water stations that vanished last week. Wilson said he will continue to pursue dialogue with Tohono O’odham officials, but he will not back down on the right of the dying to water.Wilson did not remove his water tanks as ordered, but respectfully declined when the district order was delivered by tribal police. However, upon return to the water stations in Baboquivari District in September, he found three of the stations had been removed. Wilson replaced two of the stations.

Wilson pointed out the large number of migrants dying here in the desert. By US Border Patrol statistics, 83 migrants died during the first half of 2008 on the Tohono O’odham Nation. However, Wilson says the number is actually greater. Wilson maintains the water stations with Tohono O’odham David Garcia. Wilson also searches the O’odham desert for bodies, like two Mayan women from Guatemala who died walking to a better life with their children. The children survived.

During the Indigenous Peoples Border Summit of the Americas in 2006 and 2007, Wilson and other Tohono O’odham were joined by Mohawks from the north to demand a halt to the militarization of the US borders. Mohawks, including Kahentinetha Horn, publisher of Mohawk Nation News, observed the arrests of Indigenous Peoples on Tohono O’odham land and were outraged at the treatment of Indian people.

Then, in June, Kahentinetha was beaten by Canadian border guards and suffered a heart attack in a police stress hold. 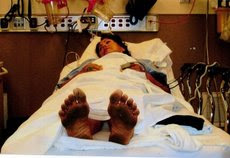 Now, recovering, Kahentinetha, who filed suit, said the stress hold was intensified as she was having a heart attack in police custody in a deliberate attempt to kill her.

Like Wilson, Kahentinetha and Katenies, Mohawk Nation News editor also beaten during the attack by border guards in June, said they will not back down on their demands for a halt to the militarization of their lands, carried out by corporate profiteers under the guise of national security.

On the southern border, Tohono O’odham Nation Chairman Ned Norris, Jr., has not made a public statement concerning the demand by Harvey for Wilson to remove his water stations. However, Chairman Norris did testify in Texas concerning the violations of federal law by Homeland Security and the border wall contractor Boeing.

However, Chairman Norris did not point out that O’odham ancestors were dug up from their graves, and later reburied, on the western portion of Tohono O’odham land in 2007 during border wall construction by Boeing.

Meanwhile, Wilson said he will continue maintaining his water stations, including those in Baboquivari District and one across the international border in Sonora. Mexico.

“It is a crime against humanity,” Wilson said of the Tohono O’odham Nation’s failure to respond with water for the dying.

Photo 1: Mike Wilson in Baboquivari District at his water station/Photo Brenda Norrell
Photo 2: Kahentinetha in a Canadian hospital after suffering a heart attack in a police stresshold at the Canadian border. Photo Sagowaiaks.
Posted by Censored News, publisher Brenda Norrell at September 21, 2008

Veronica Harvey needs to be charged with a Crime Against Humanity for taking such an evil position towards her fellow humans. I must say she has a lot of nerve comming back to the reservation and managing to get herself elected Chairwoman and taking such an evil position on this issue. Considering she spent most of her adult life as a resident of the City of Tucson. Then she has the nerve to come back and think she can decide what is in the best interest of residents. I would hope the community members would know enough to remove her from office.