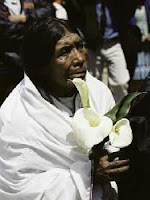 From Earth Peoples:
Sept. 27, 2008 - On the third day of the General Assembly's 63rd Session, the United Nations Secretary-General Ban Ki-moon and the Prime Minister of Norway launched the United Nations REDD program, a collaboration of FAO, UNDP, UNEP and the World Bank.
The inclusion of forests in the carbon market, or REDD (Reducing Emissions from Deforestation and Degradation) has caused anxiety, protest and outrage throughout the world since it was created at the failed climate change negotiations in Bali and funded by the World Bank.
An estimated 60 million indigenous peoples are completely dependent on forests and are considered the most threatened by REDD. Therefore, indigenous leaders are among its most prominent critics.
The International Indigenous Peoples' Forum on Climate Change declared that: '...REDD will steal our land... States and carbon traders will take control over our forests.'It is alarming that indigenous peoples' fears and objections have now been confirmed by the UN-REDD Framework Document itself.
On page 4 and 5 it blatantly states that the program could "deprive communities of their legitimate land-development aspirations, that hard-fought gains in forest management practices might be wasted, that it could cause the lock-up of forests by decoupling conservation from development, or erode culturally rooted not-for-profit conservation values."
It is further highlighted that "REDD benefits in some circumstances may have to be traded off against other social, economic or environmental benefits."
In carefully phrased UN language, the document further acknowledges that REDD could cause severe human rights violations and be disastrous for the poor because it could "marginalize the landless and those with communal use-rights."
This is tantamount to the UN recognizing that REDD could undermine indigenous peoples and local communities rights to the usage and ownership of their lands.
Could it be that the UN is paving the way for a massive land grab?
To see photos from the protest against REDD and the World Bank in Bali: http://www.globaljusticeecology.org/gallery.php
To watch the video from the protest against REDD at the United Nations Permanent Forum on Indigenous Issues: http://www.youtube.com/watch?v=UtORVi7GybY

PROJECT CENSORED 2009: An article by Censored News on the carbon scam, selected as one of the most 25 most censored issues, is a selection of Project Censored 2009. An update on the carbon scam by Brenda Norrell appears in the new book, Project Censored 2009. "Indigenous peoples continue to expose carbon credits as a scam for profiteering corporations and the World Bank, fueled by the easily manipulated news media. While carbon brokers become millionaires, the reality of the carbon credit scheme hits indigenous peoples around the world with full force, particularly in South America, India, and Africa," the update states.
More info: Indigenous Environmental Network (http://www.ienearth.org)
Censored News (http://www.bsnorrell.blogspot.com)
Earthcycles (http://www.earthcycles.net)
Information Package on: UN - REDD NEWS from the United Nations 63rd General Assembly currently in Session
From Earth Peoples
The UN-REDD Programme was officially launched during the High-Level event on the Millennium Goals on 25 September 2008 at UN Hqrs in NYC. UN-REDD is the United Nations Collaborative Programme on Reducing Emissions from Deforestation and Forest Degradation in Developing Countries.Framework Document by FAO, UNDP, UNEP http://www.undp.org/mdtf/UN-REDD/docs/Annex-A-Framework-Document.pdf
A Press Conference took place at the United Nations on 24 September 2008
UN Press release http://www.un.org/News/Press/docs/2008/sgsm11812.doc.htm
United Nations Environment Programme (UNEP) Press Release http://www.unep.org/Documents.Multilingual/Default.asp?DocumentID=545&ArticleID=5930&l=en
UN - REDD and Indigenous Peoples
Various Indigenous representatives are opposed to UN-REDD. On 25 April 2008, the last day of the 7th session of the United Nations Permanent Forum on Indigenous Issues at UN Hqrs in NYC, the Indigenous Caucus of the Americas attempted to present a statement against REDD.As the Caucus was called out of order by the Chair, a protest ensued and Caucus members threatened to walk out. Security was called. A peacefully outcome resulted when the Chair allowed the Caucus representative to read the statement.
To watch the video (by Filmmaker Rebecca Sommer) from the protest against REDD at the United Nations Permanent Forum on Indigenous Issues: http://www.youtube.com/watch?v=UtORVi7GybY
28 September 2008 - Compiled by Marie-Danielle Samuel, Main Rep. to UN
YACHAY WASI, NGO/UN ECOSOC & DPI, NYC and Cuzco, PERU "Yachay Wasi means House of Learning in Quechua"Luis Delgado Hurtado, PresidentLa Conquista 3ra puerta (Saphi)Cuzco, PERU Phone: 51-84-315815Marie-Danielle Samuel, Vice President708 West 192nd Street # 6BNew York, NY 10040 USAPhone: 212-567-6447Fax: 917-529-0922 Email: yachaywasi@nyc.rr.com
http://www.yachaywasi-ngo.org Yachay Wasi is in Operational Relations with UNESCO
Posted by Censored News, publisher Brenda Norrell at September 28, 2008