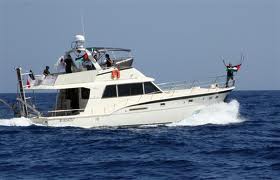 The French boat “Dignité/Karama” (Dignity) left the Greek island Kastellorizo around 8:30PM local time on Saturday July 16, 2011, heading south. The ten passengers onboard view themselves as representatives of the whole Freedom Flotilla II – Stay Human. The rest of the Flotilla’s ships have been detained in different Greek ports, through bureaucratic obstruction, sabotage, sudden restrictions and withdrawals of flags.
The Dignité, sailing under a French flag, left Corsica on June 25th, and has, over the past weeks, been in Greek waters. It has now left– so far without being followed by the Greek coast guard or Navy.
Among the delegates on board is Stephan Corriveau of the Canadian Boat to Gaza, as well as representatives of the French, Greek and Swedish initiatives within Freedom Flotilla II. Onboard the Dignité are also renowned Israeli journalist Amira Hass, reporting for Haaretz, and a team from Al-Jazeera TV.
Kastellorizo, in the far east of the Greek archipelago, is only miles from Turkish mainland. A substantial part of Kastellorizo’s population fled during the second World War to Gaza, where they stayed for years. The present mayor of the island, Paul Panigiris, was born in Gaza, and feels strongly, as do many other people from Kastellorizo, for a population that once hosted them and is now under siege.
The action of Dignité is not a mini-version of Freedom Flotilla 2, but a first wave that will be followed by others. It is a message to the Israeli government, to the international community and to the besieged people of Gaza: The Canadian Boat to Gaza &; Freedom Flotilla II are not giving up, until the inhumane and illegitimate blockade of Gaza is lifted.
Gaza, we are coming!


The song is performed by the newly created GYBO rap team and it's dedicated to all the freedom fighters world wide, to all those who raised the palestinian flag to face zionism and specially to the passengers of the flotilla1, flotila2, flytilla, viva palestina convoys, road to hope convoy, Africa to Gaza, Asia to gaza and to our friends in the vik2gaza convoy.
at July 16, 2011 No comments: 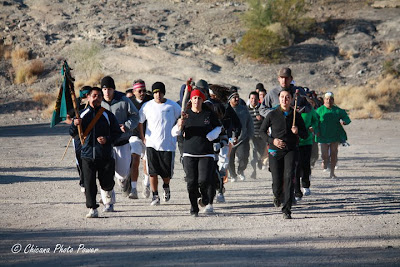 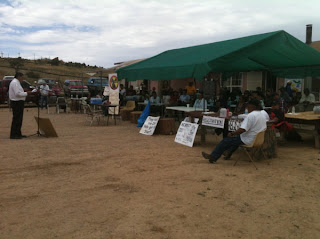 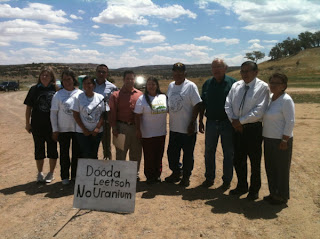 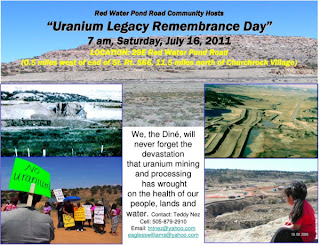 Photos copyright by Nikke Alexis, Navajo, published with permission at Censored News
Article copyright Brenda Norrell
Photos by Nikke Alexis
Censored News
http://www.bsnorrell.blogspot.com
CHURCH ROCK, N.M. -- Navajos gathered in Church Rock, N.M., on Saturday to remember the disease, death and destruction caused by the worst uranium tailings spill in history, which flowed down the Rio Puerco and poisoned the people and the land for decades after the June 16, 1979 spill.
Even as this tragedy is exposed, a new corporation, Hydro Resources, Inc., has received a license to mine for uranium in the Church Rock and Crownpoint, N.M., area, threatening Navajos aquifer and drinking water.
The Uranium Legacy Remembrance Day memorialized the tragedy that brought increased rates of heart disease, birth defects, cancer and death to Navajos.
"We the Dine', will never forget the devastation that uranium mining and processing has wrought on the health of our people, lands and water," was their message.
With no help to halt new uranium mining coming from the US legal system, Navajos appealed to the Inter-American Commission on Human Rights in May. The Eastern Navajo Diné appealed to the international community to stop uranium mining in the Navajo villages of Church Rock and Crownpoint, New Mexico.
The Diné group filed an appeal with the Inter-American Commission on Human Rights on May 16, following 16 years of struggle. The Eastern Navajo Diné Against Uranium Mining (ENDAUM), represented by the New Mexico Environmental Law Center (NMELC), fought to overturn a mining license that was awarded to Hydro Resources Inc., by the U.S. Nuclear Regulatory Commission,
Currently, this license threatens the water supply of 15,000 people in the Church Rock and Crownpoint area. The majority are Navajos living in this area known as a checkerboard land area, because of the various types of land ownership. But the aquifer flows beneath the land and is the primary fresh water source for Navajos living on the Navajo Nation here.
“The HRI license marks the first time that any mining company in the U.S. has been federally authorized to mine uranium in a community drinking water aquifer,” said NMELC attorney Eric Jantz in a press statement.
“This aquifer provides the sole source of drinking water for the mostly Navajo community members represented by ENDAUM. By granting this license, the National Regulatory Commission has failed to uphold its mandate to protect the health and safety of all Americans.”
Navajos here want the Nuclear Regulatory Commission to suspend HRI’s materials license “until such time as HRI has remediated the radioactive surface contamination on Church Rock’s Section 17, and the United States has taken significant and meaningful steps to remediate the abandoned uranium mines within the boundaries of the Church Rock Chapter,” the press release said.
Navajos are also pressing for the Nuclear Regulatory Commission to submit, for public hearing, the comprehensive data of the baseline groundwater quality and other hydrological, geological and geochemical facts.
In addition, Navajos want the National Regulatory Commission to rescind HRI’s license to mine uranium on Church Rock Section 17 and Unit 1 sites. The Navajo Nation government has already passed a ban on uranium mining and processing. Further, Navajos here said that Navajo petitioner Larry King and his family should not be removed from Church Rock Section 17. In addition, they said there should be no forced disruption of his subsistence grazing practices or cultural activities.
The contamination from previous uranium mines has already resulted in high rates of cancer, heart disease and birth defects. Cleanup efforts are taking years, and the U.S. Environmental Protection Agency is evaluating more than 500 sites in the western part of the Navajo Nation alone.
Navajos here said the Nuclear Regulatory Commission has ever been taken to task for its lax regulations.

..
Photos copyright by Wesley Dick, published with permission at Censored News
(Photo 1) "Ticutta people.  My children are standing with me.  I was confronted by the U.S. Game Warden just a few hundred yards from this public sign." (Photo 2) Wesley Dick gathering tules in a drainage ditch on Indian land. (Photo 3) Wesley Dick working on a tule duck to present for a 3rd grade class demonstration. (Photo 4) Tule ducks.
Traditional Paiute tule gatherer fighting for Native American gathering rights
By Brenda Norrell
Censored News
http://www.bsnorrell.blogspot.com
NORTHERN PAIUTE STILLWATER INDIAN LAND -- Northern Paiute traditional gatherer and craftsman Wesley Dick was cited by a Nevada game warden and fined $800 while gathering tules. Dick said Native American gatherers and craftsmen should pay close attention to what is happening in the state of Nevada.
"If I lose my case, all traditional people will be affected.  The Fish and Game claims I am their first Native American to be cited; and I wish to be the last.  I have been told by several other Natives that the American Indian Religious Freedom Act is weightless and weak.  I hope my case gives it the extra boost of power for the next indigenous person," Dick told Censored News.
"I am not interested in any policies, restrictions, regulations or limitations and definitely not their approval or authorization to provide for my family and my people's needs. Their policies pertain only to their own people. I know for a fact that all aboriginal people have the same feeling and understanding as I."
As with most mainstream media coverage, Dick said that a newspaper article in the Reno Gazette-Journal on July 6, 2011 fails to tell the whole story. http://www.rgj.com/article/20110706/NEWS/110706033/Paiute-artist-picking-cattails-gets-800-citation
"The article does not detail enough information concerning our sacred contribution to our homelands as you will read. My intentions are to educate the non-Natives and Native people.  Also to encourage our valued cultural traditions, teachings we all posses. My case focuses on the tule plant but it will later affect hunting and aboriginal land claims we are in desperate need of," Dick said.
Dick, known as “Kwassuh” by his people, was gathering tule in the ceremonial way when he was cited by a Nevada game warden and given fines of $800 in May. For the past 18 years Kwassuh, 45, has worked an average of 170 hides a year of deer, moose, elk, buffalo and antelope in the traditional style of brain-tanning. Many items are made for powwow dancers, including moccasins, fan handles and hair wraps. He also makes items for ceremonies such as various sized hand drums. No chemicals are used, only natural elements such as the sun, water, brains, fire and stretching the hide by hand. This direct hands-on experience keeps him in touch with the spirituality of the animal hide that he works with.
Hide work is not a hobby, it is a way of life.
Hunting and plant gathering are very sacred to Kwassuh and the tanning of the hide is the end result in giving an animal honor by using it for nutri

tion, clothing, tools and ceremonies. These traditional ways were taught to him by elders, friends and relatives who shared stories with him when he was a child, as well as many experiences from his youth into adulthood. Living on the Stillwater Indian Nation, Kwassuh has seen and experienced the loss of Native culture among his people and other tribal people at a drastically growing rate.
Demonstrations and workshops are the best way that he can reach many people at one time and he is always willing to teach whoever is willing to listen and learn. All ages have been successful and all the hard work and experience make it all worthwhile.
From start to finish, each hide is different and has its own individuality. Kwassuh has learned the dangers and extreme physical work that is needed in all seasonal conditions throughout the year. Full faith in the Creator has kept him safe and much thanks is given to the traditional people in his life that he has learned from.
Read more ...
http://bsnorrell.blogspot.com/2011/07/northern-paiute-traditional-gatherer.html
at July 16, 2011 No comments:

Humanitarians detained and cited for saving lives on the border

TUCSON -- Four humanitarians from No More Deaths were detained and cited southwest of Tucson, near the Arizona border, where summer temperatures range from 110 to 117 degrees.

"In recent weeks, temperatures in the Arizona-Sonoran borderland have climbed into the three digit range alongside the escalated number of bodies of sisters and brothers recovered in the blistering desert heat," No More Deaths said.

The No More Deaths humanitarians were walking an active migrant trail in accordance with the mandate "to feed the hungry and offer drink to the thirsty."

"Here in the borderlands a  classic work of mercy becomes a work of resistance," No More Deaths said.

No court date has yet been set. The four have the option to pay a $100.00 forfeiture or face trial.

In other news, two No More Deaths volunteers were part of the courageous effort of the Freedom Flotilla II and efforts for Palestine.