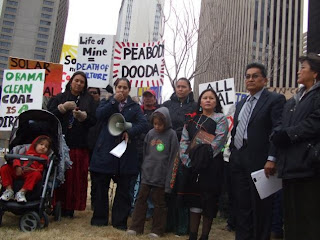 FLAGSTAFF, Ariz. -- A massive coal-mining facility on Black Mesa has a much more damaging effect to a vital local water supply, according to a new report released today. A hydrology study, prepared by Dr. Daniel Higgins (PhD in Arid Lands Resource Sciences from the University of Arizona) program demonstrates that after four decades of coal mine groundwater withdrawals, mine-related impacts to the Navajo Aquifer (N-aquifer) far exceed those that have been acknowledged or recognized by the Office of Surface Mining (OSM), the lead Regulatory


Authority for Peabody Coal’s massive mining facility on Black Mesa. The N-aquifer is an important source of water below Black Mesa that feeds sacred springs and is used by thousands as drinking water.
"Despite what these models predicted years ago, I think any reasonable person who looks at the
data would conclude that the rates of water level decline at Kayenta and spring discharge decline
at Moenkopi are directly related to Peabody's groundwater withdrawals,” said Higgins, who
studies the interactions of complex social-ecological systems and spent more than five years
investigating Black Mesa’s groundwater development – the focus of his dissertation research.
"This report reaffirms the fact that coal industry continues to materially damage our aquifer
with impunity," said Marshall Johnson of the Navajo grassroots organization, To’ Nizhoni Ani,
or
Beautiful Water Speaks. "The truth is that Peabody has yet to prove that the mine is not


damaging the aquifer and OSM has yet to hold Peabody accountable. Instead of addressing the
health of the aquifer, OSM works on creating new standards each time that have been exceeded
so for us, it's disappointing watching a federal agency deliberately sidestep its responsibilities."
Wahleah Johns of the Black Mesa Water Coalition said, “OSM should not award Peabody a
permit renewal until a thorough investigation is conducted on the findings of this report on the
N-Aquifer.”
“Dr. Higgins’ report comes at a critical time while OSM is preparing an Environmental
Assessment to analyze the impacts of the Kayenta Mine. OSM officials now need to address
and respond to this report before they let Peabody off the hook for damage to the Navajo
aquifer,” said Nicole Horseherder of To’ Nizhoni Ani and a Black Mesa resident where she
depends on the N-Aquifer for her home and ranch. “The Obama Administration needs to restore
environmental justice for local communities and hold Peabody accountable for damaging that
most basic human right—the right to drink in perpetuity pure, clean water.”
“We have known for a long time that water withdrawals have been impacting local springs and
wildlife but this report puts the burden on OSM to demonstrate to local communities why mine
operations should be allowed to continue,” said Taylor McKinnon of the Center for Biological
Diversity.
Higgins’ report was submitted by the OSM by Black Mesa Water Coalition, Dine CARE, To’
Nizhoni Ani, the Center for Biological Diversity and Sierra Club as a supplement to comments
previously submitted to the agency in 2010. OSM is preparing an Environmental Assessment
that will be available for public review in August of 2011. The groups have asked OSM to hold
a meeting within the next 30 days to discuss the report’s findings.
Contacts:
Daniel Higgins, PhD, 520-243-9450
Wahleah Johns, Black Mesa Water Coalition, 928-637-5281
Andy Bessler, Sierra Club, 928-774-6103
Anna Frazier, Dine CARE, 928-401-0382
Taylor McKinnon, Center for Biological Diversity, 928-310-6713
###
at July 21, 2011 1 comment:

TACOMA, Wash. -- The Kuiu Kwaan Tribal Court in Tacoma, Washington, issued a declaratory judgment in the case of Northern Paiute traditional gatherer Wesley Dick vs. the United States. The combined court of judges from across Indian country issued the judgment upholding the right of Wesley Dick, Kwassuh, to gather tules in the traditional way, after he was cited and fined $800 by US Fish and Wildlife in Nevada.
Kuiu Kwaan Tribal Court Lead Judge Rudy Al James and judges from across Indian country issued the declaratory judgment on July 20. The legal citations include laws that uphold the authority of tribal courts and protect human rights and fundamental freedoms. The US Code which prohibits genocide and discrimination of culture and religion is included in the legal citations.

"In the matter of Wesley Glen Dick, Jr., vs. The United States ... It is the judgment of the Court that the United States violated the First Amendment of the United States Constitution, which says, 'Congress shall make no law respecting an establishment of religion.' The right to freedom of religion was denied to Mr. Dick by restricting his right to practice his religion, by preventing his harvest of plants necessary to carry out his religious practices. The Native American Free Exercise of Religious Act of 1993 protects the religious use of animal and plants necessary to carry out one's religious practices. Therefore it is the judgment of this Court that all charges and fines must be dismissed against Mr. Wesley Dick, Jr., on this 20th day of July, 2011."
Kwassuh told Censored News, "This is the reason why my family and I traveled 1,000 miles from home, to get fair justice served from a Tribal Court concerning Tribal matters. I appeared before the very knowledgeable Tribal representatives of the Kuiu Kwaan Tribal Court. Tribal Court Judge Rudy Al James did an outstanding job recognizing every detail of my case and more. There needs to be more Tribal Courts like this one that fully represents all of our Indigenous Nations of peoples."
After enduring the financial burden of the 1,000 mile trip, Kwassuh said Thursday, "My full faith will get us home safely. We are all thankful for the support of the people who made it possible for us to make this very important trip. I plan on sharing how we possess our sacred Indigenous right with others who want to listen and put an end to the overbearing domination by the U.S. Government that's been taking place too much, as well the encroachment of our lands."
Kwassuh said his people refer to themselves in terms of their traditional foods.

"My people in the area of Nevada are known as the Numa. In the Paiute language, that means 'the Native People.' In Nevada the identity of the Numa is what they are known for eating the source of food in a certain area.
"Pyramid Lake Numa, outside of Reno, is a Paiute. Numa are known for the fish in their area Cui-ui Ticutta (fish eaters). The fish is a rare species that only lives in Pyramid Lake. Fort Bidwell Paiutes, Numa, are known as Kida Ticutta (groundhog eaters).

Kwassuh said he knows of at least 20 uses of this plant. "What people don't recognize is that before there were any non-Native people in the Toi-Ticutta area, the people lived very well"

Referring to a historical marker, Kwassuh said points out that the United States is well aware of the history of his people here. "The U.S. Fish and Wildlife Service, the Department of the Interior, and the Fallon Paiute-Shoshone Tribe are well aware of our existence from our people today, and the past, in order to produce this sign, that is located in the area where I was cited by the U.S. Game Warden."
"Ancient human remains were discovered in a cave in the local area and the Nevada State Museum in Carson City is knowledgeable. Also the Toi-Ticutta are aware that he is my ancestor and is claimed to be one of the oldest ancient Native Americans in the Western United States. He was dated as 10,650 years old, an estimate by the Nevada State Museum archaeologists," Kwassuh said.
"I am a member of a federally recognized tribe, the Fallon Paiute-Shoshone Tribe. I am a Toi-Ticutta."

In Tacoma, the Kuiu Kwaan Combined Traditional Tribal Court cited the Northwest Ordinance of 1787 and the Indian Tribal Justice Act, which uphold the authority of tribal courts. The tribal court also cited US Code, Chapter 50A, Section 1091 on Genocide which prohibits discrimination of culture and religion and prohibits genocide.
The judgment is signed by Kuiu Kwaan Lead Tribal Judge Rudy Al James; Jack McCloud of the Nisqually Nation; Dr. Betty Case, Tribal Judge of the Cherokee Nation; Walter Harding, Associate Judge of the Wampanoag Nation; Eric Brewer, Associate Judge of the Nisqually Nation; Steve Brown, Associate Tribal Judge of the Concow Nation; Hadassah Baht Yisrael of the Yisrael Nation and Leroy Rose of the Cherokee Nation.
UPDATE July 27, 2011:
"The charges of picking the plant were dropped but they are still holding on to me trespassing.  It's crazy because I'm due in Reno District Court on October 11, 2011.  I'm being charged with trespassing on my own aborigional territory; the court date is the day after Columbus Day." Wesley Dick