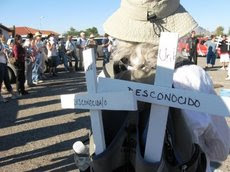 The most censored, most popular, at Censored News
By Brenda Norrell
Censored News
http://www.bsnorrell.blogspot.com
Photo: Remembering migrants by Brenda Norrell
The most accessed articles at Censored News for the past year expose unauthorized wiretaps on Mohawks; protesters locked down to protect San Francisco Peaks; US Marines patrolling the Arizona border stalking migrants, and a hate crime against Reno Sparks Indian Johnny Bonta and his family in Fernley, Nevada.
This week’s most popular article at Censored News exposes an oil spill into the Cutbank River on the Blackfeet Nation in Montana. Intrepid Blackfeet reporter Destini Vaile was the first to expose the spill and shared it with Censored News. The mainstream media then limped behind her report.
In breaking news, Indian country judges issued a combined declaratory judgment in support of traditional gathering rights in Tacoma, Washington. Citing the law that prohibits genocide and discrimination, Kuiu Kwaan Lead Judge Rudy James and Indian country judges issued the judgment in support of Northern Paiute Wesley Dick, Kwassuh. He was fined by the US Fish and Wildlife Service while gathering tules, cattails, in May.
The devastation of Peabody Coal on Black Mesa, and its impact on draining the region’s water supply, is exposed in a new report by Navajos and environmental organizations.
Read more at Censored News
http://www.bsnorrell.blogspot.com

Holiday Toy Drive To benefit children in communities on southern O’odham lands for Children 2 to 15 years old. Only, gender-neutral toys, No...