Mohawk John Kane to UN Rapporteur: Process is a farce

As the UN Permanent Forum on Indigenous Peoples begins in New York, some Native people living on the land say they are cancelling plans to attend due to this year's focus on rhetoric -- rather than the life-threatening issues facing Native people, from fracking, uranium mining and coal fired power plants, to deforestation, the militarization of homelands and theft of water rights.
John Kane, Mohawk and radio host of Lets Talk Native Pride, challenges the rhetoric and challenges countries of the world to trade directly with sovereign Indian Nations and honor their passports. Kane responds to the sessions of the United Nations Rapporteur for Indigenous Peoples James Anaya held across the US in April and May.
Kane said, "I know most Native people want to throw a 'love-fest' for the 'special' rapporteur. But suggesting ways for the US to make gestures to 'heal our wounds' is neither shocking or bold. Let's see Mr. Anaya say what everyone already knows: that the US is guilty of genocide and crimes against humanity or at very least should face the charges." 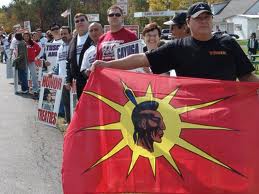 By John Kane, Mohawk
Censored News
French translation: http://www.chrisp.lautre.net/wpblog/?p=744
We are not matriarchal but rather matrilineal. In our ways men and women share evenly but distinctly in the affairs of our people.
Anaya does not recognize the people. He can't see a tree, only a forest. In fact he may not even see the forest but rather the maple or oak or the redwood as a species. What happens to the tree or the individual is not what is important to this guy. For him it is all about the "tribe" and the "tribal leaders."
This is why it is the Declaration on the Rights of Indigenous Peoples, not People. Informed consent from these guys checks the box.
The failure of the world, including the US and including Mr. Anaya to not understand that our sovereignty is a birthright, that we are BORN with the right to our freedom, is what makes this whole process a farce.
We were never an institutionalized people. Our idea of self governance was based on participation. We did not have a chief system but rather a clan system. We never divested ourselves of our birthright to empower a chief, a council, the state or the feds. We allowed people to carry our voices not speak for us. We allowed selected persons to communicate our will, not dictate it to us and others.
Anaya said in a statement, ‎"I heard almost universal calls from indigenous nations and tribes across the country that the Government respect tribal sovereignty."
The "Government" my ass!
It's about time other nations stepped up and asked the question: When did Native people stop being sovereign?
If the rest of the world would stop quaking in their boots every time the US says their "Indian Problem" is a domestic issue, then perhaps there could be progress.
Let one of you dare to trade with us. Let one of you fight to honor our passports. Let one of you establish formal diplomatic relations or provide financing, education or genuine humanitarian aid for our most impoverished communities.
John Kane
jmkane1220@aol.com
Listen online to Lets Talk Native Pride
http://letstalknativepride.blogspot.com/
Also see: Troubling questions for the UN Rapporteur, statement from Ofelia Rivas, O'odham:
Ofelia Rivas, O'odham representing traditional and ceremonial O'odham, responded to the UN Rapporteur's session in Tucson, Ariz., located on traditional O'odham homeland.
"Not only am I unable to pay for the parking space, but I don't have the gas money to bring the elders and the ceremonial people. These are the people that these institutions should be hearing from to truly understand the implications and true significance of this document. It is disheartening to find on the speakers list a non-O'odham with a non-profit organization using our most sacred figure of the O'odham way of life."
At the Tucson session, the traditional ceremonial O'odham were not on the invited speakers list.
Rivas said, "I am on the speakers list only by a 5 day 'extreme effort' by the Amnesty International people."
Read more:
http://www.bsnorrell.blogspot.com/2012/04/troubling-questions-for-un-rapporteur.html
at May 07, 2012 3 comments: 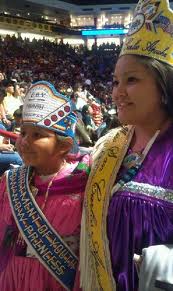 The Hope of the Future: Children and youth

Thanks to Sandra Rambler for sharing this photo with Censored News.
On April 27, Miss San Carlos Apache, Desirae Rambler and another youth princess were present to witness the dancing competition of the Miss Indian World contest held at the UNM in Albuquerque, New Mexico, as thousands of spectators cheered on the contestants which included former Miss San Carlos Apache 2011, Edith Starr of Peridot, Arizona.
at May 07, 2012 No comments:

Halt uranium mine that will poison Navajo water


SANTA FE, N.M.— The New Mexico Environmental Law Center (NMELC) and Eastern Navajo Diné Against Uranium Mining (ENDAUM) are urging the U. S. Environmental Protection Agency (EPA) to revoke an ill-advised permit they gave to uranium mining company, Hydro Resources, Inc. 23 years ago.
After ENDAUM and NMELC brought deficiencies in the permit application to EPA’s attention, the EPA took the unprecedented step of revisiting its decision to grant the permit.
“The permit is an ‘aquifer exemption,’ which allows Hydro Resources to conduct uranium mining in a groundwater aquifer under the community of Church Rock, NM,” says Eric Jantz, NMELC Staff Attorney and lead counsel on the case. “The type of uranium mining it is proposing would contaminate potable water with radiation and heavy metals, making it unfit for consumption forever. The EPA has both the legal authority and moral obligation to revoke the aquifer exemption.”
The type of mining is called in situ leach mining, or ISL, which involves injecting a chemical solution through ore zones to dissolve uranium so it moves freely in water.  Then the uranium-filled water is pumped to the surface where the uranium is chemically stripped, and the water is returned to the aquifer. No ISL operation in U.S. history has been able to restore groundwater in a mined aquifer to pre-mining quality.
"Our communities have repeatedly expressed that we do not want this ISL mining or processing in Church Rock and Crownpoint,” says Larry J. King, ENDAUM Board Member and one of the more than 15,000 Navajo people who would be impacted by the mine. “We have expressed this through resolutions, litigation, even a Navajo Nation law. Because of a legal technicality, even though the mine site is in a Navajo community and surrounded by tribal land, the Navajo Nation law does not protect us from the proposed mine.  That's why it's crucial that EPA step in and revoke the aquifer exemption before risking any more harm to our water, our people, our culture and our future."
King, a member of the Navajo Nation and a former miner who has suffered adverse health effects because of his former occupation, started a fast-growing campaign on Change.org that calls on the EPA to protect drinking water in the Navajo community of Church Rock, NM. (Change.org petition: http://www.change.org/petitions/epa-don-t-sacrifice-navajo-water-for-uranium-mining)
“There is a long legacy and many unhealed sores from uranium mining on Navajo land by companies that look to make a quick profit. I’m sick of watching my community suffer from the poisons of uranium mining,” adds King. “It’s been a very frustrating and long road, but we won’t back down.  We hope the Change.org petition will help inform Americans about this issue and hope to get more than 10,000 signatures to convince the EPA to do the right thing.”
www.nmelc.org
INTERVIEWS AND IMAGES ARE AVAILABLE UPON REQUEST
Contact:
Juana Colón, Communications and Public Education
New Mexico Environmental Law Center
jcolon@nmelc.org
505-989-9022, ext. 30
The mission of the New Mexico Environmental Law Center is to protect New Mexico's natural environment and achieve environmental justice for New Mexico's communities through legal representation, policy advocacy and public education. The New Mexico Environmental Law Center’s attorneys have handled over 100 critical cases in low-income and minority communities fighting pollution and environmental degradation. The NMELC charges few, if any, fees to its clients, most of who are from Hispanic and Native American communities. The NMELC is celebrating its 25th anniversary this year! Membership and gifts help New Mexico communities protect their natural environment and their health from toxic pollution, the degrading effects of growth and liabilities created by irresponsible mining.
ENDAUM is a Diné-led, grassroots non-profit organization governed by a Board of Directors who live in Diné communities in northwestern New Mexico affected by uranium mining. ENDAUM’s mission is to protect the purity of the water, air, lands and community health in areas impacted by Uranium activities for the present and future generations. ENDAUM works to empower our communities through education and sustainability to protect and respect the foundations of our Diné Way of Life. www.Facebook.com/ENDAUM

Congressmen refused to meet with UN Rapporteur for Indigenous Peoples

Statement of the United Nations
Special Rapporteur on the Rights of Indigenous Peoples, James Anaya,
upon conclusion of his visit to the United States

Washington, D.C.– "In my capacity as United Nations Special Rapporteur on the Rights of Indigenous Peoples, I am concluding my official visit to the United States of America, which I have been carrying out over the past twelve days. During my mission, I have held consultations with indigenous peoples, tribes, and nations in Washington, D.C.; Arizona; Alaska; Oregon; Washington State; South Dakota; and Oklahoma, both in Indian Country and in urban areas. I also had a series of meetings with representatives of the executive branch of the federal government and with state government officials. I regret that my efforts to meet with members of the U.S. Congress were unsuccessful, especially given the prominent role of Congress in defining the status and rights of indigenous peoples within the United States.
Read more: http://unsr.jamesanaya.org/visit-to-usa/statement-of-the-united-nations-special-rapporteur-on-the-rights-of-indigenous-peoples-james-anaya-upon-conclusion-of-his-visit-to-the-united-states

Also see at Censored News:
Troubling questions for the UN Rapporteur: Is the process of testifying so academic, complicated and expensive, that it eliminates many grassroots people?
Read more:
http://www.bsnorrell.blogspot.com/2012/04/troubling-questions-for-un-rapporteur.html

Navajo and Lakota testimony to UN Rapporteur at Censored News:

US Dept of Justice addressing ethnic studies ban in Arizona

Recently the Department of Justice reached out to several Mexican American Studies faculty members at the University of Arizona requesting a gathering of parents, students, and community members invested in the success of the MAS program in the Tucson Unified School District.
The politically motivated attacks on MAS in TUSD have been relentless, initiated by the state and carried out by district board members and administration.
Recently, Arizona superintendent of public instruction John Huppenthal suggested that ethnic studies programs at the university level should be eliminated. This unacceptable assault on academic freedom and critical thinking has serious implications for all ethnic and gender studies, and demonstrates a gross disregard for free expression and inquiry.
Department of Justice representatives would like the opportunity for dialogue with the community regarding this and other issues affecting educational equity in Arizona. We hope that this renewed attack will serve as a catalyst for representatives of all disciplines at the K-12 and university level to come together and condemn these attacks on academic freedom. We would like to propose organizing a community forum next Tuesday, May 8 that 5:30 pm to get together and share our concerns with the DOJ.
We have suggested the CPLC Youth Center on Ft. Lowell as a venue, and hope that we can have a sincere discussion about how these attacks have affected us all.
In Solidarity, The Mexican American Studies Community Advisory Board
-- Thanks and Sincerely
﻿

Also watch: Video interviews with students at Tucson Book Festival 2012: http://bsnorrell.blogspot.com/2012/03/uncensored-mexican-american-students-at.html
at May 07, 2012 No comments: