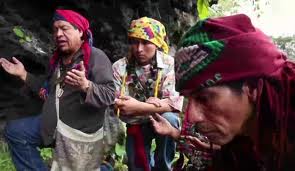 Watch film trailer below:
SAN FRANCISCO -- AIM-WEST, a community based inter-tribal advocacy organization, cordially invites you to its premier benefit screening of the documentary “Guatemala Lives (Vive)!” directed by De La Tierra Productions filmmaker, Adrian Carrasco Zanini.  The occasion will be held at the BRAVA Theater, 2781 24th Street, in San Francisco’s Mission District.
The film aptly illustrates how Indigenous peoples of Guatemala are striking a new direction in contemporary governance, and calls for transparency.  Another related documentary will be shared called “Granito: How to Nail a Dictator” (English sub-titles, 103 min.) starting at 7:30 pm.  Doors open at 6:30 pm, tickets are $10, raffle, drummers, singers, vendors, and refreshments available.  The public is welcome, especially recommended for activists, students, political scientists, and Mayan families.
“Guatemala Lives (Vive)!” Is a thirty-seven minute (with English sub-titles) poignant and up-to-date account of the daily struggles of Indigenous Mayan peoples empower themselves to attain justice, self-determination, and a presence in Guatemala politics, with emphasis on the theme of participatory democracy.  The film attempts to utilize the UN Declaration on the Rights of Indigenous Peoples (Article #18) adopted by the United Nations General Assembly in 2007, to chronicle the actions of several current social movements that are demanding answers to an unending list of demands for justice, an end to economic disparity, and their right to be dully represented in local and national governments.
“Guatemala Lives!” introduces the newly formed WINAQ movement, the first Indigenous peoples’ political party that had Nobel Prize winner Dr. Rigoberta Menchu Tum as presidential candidate in the 2011 elections, and two other progressive political organizations (Frente Amplio); the HIJOS movement that seeks to punish those responsible for the killings and disappearances of thousands of Guatemalans during a thirty-year armed conflict that ended with the 1992 peace accords; and, success stories and small victories of progressive movements such as the forming of peasant and Indigenous people’s farming cooperatives, the pro-dwelling movements in and around Guatemala City, the efforts of local communities and human rights organization to find their family remains and bring to justice those responsible, primarily the military and police forces that conducted a policy of murder and elimination of peasant and Indigenous populations, and the youth response to their lack of a future in a outdated and obsolete form of government.
“Granito: How To Nail a Dictator” was initially screened at the Sundance Film Festival and one year after the release of the film, the ex-dictator of Guatemala, General Efrain Rios Montt, was brought up on charges of genocide in a Guatemalan court, and placed under house arrest.  This historic event in the quest for justice in Guatemala resulted from decades of work by many, many people and the indictment was based on overwhelming evidence in the form of military documents, exhumation reports, photos and footage from this film linking Rios Montt directly to hundreds of deaths and disappearances.
The defense argued that Rios Montt did not have command responsibility over his Army officers in the highlands, and that he was not responsible for the massacres.  This is belied by a clip from “Granito” that the prosecution and the Guatemalan media used to show the general taking command responsibility, saying: “If I don’t control the army, then who does?”

Come and support the local activities of the American Indian Movement!


Freedom for Leonard Peltier, NOW!
DVD’s of “Guatemala Lives!” will be available for a donation at the event. AIM-WEST is a non-profit organization, your generous support is especially appreciated.
Wheel-chair accessible, alcohol and drug free event.
www.aimovement.org
www.whoisleonardpeltier.info

VIDEO WITH ENGLISH TRANSLATION!  The Zapatista leadership in Oventic (JBG) and the family of a Zapatista prisoner made this important and unprecedented audio message presented with English translation in this excellent video produced by the Movement for Justice and the Other Campaign in New York. Please share broadly. http://www.megafono.lunasexta.org/node/229
at May 15, 2012 No comments:

TUCSON -- Western Shoshone Carrie Dann spoke of the sacredness of all living things and how gold mining is continuing to destroy the land, water and sacred places of the Western Shoshone.


During testimony to the UN Rapporteur on Indigenous Peoples, Dann stressed the importance of ancestral lands of the Western Shoshone in Nevada and southern Idaho, in  regards to the UN Declaration on the Rights of Indigenous Peoples.
“Think as an Indigenous Person, how it must hurt our Mother to have her ripped apart by gold mining companies and others that drill for things under her skin and through her body. It’s sad to look at these things and then try not to believe this is really happening, but it is," Dann said during the testimony on April 26.

Land is the Mother of Life
Dann said, “We don’t look at land as real estate. We look at it as a Mother, the Mother of Life. And not only to the ones with two legs, but all that live on earth, eight legs, wings, fins, this is the Mother of Life.
“My grandmother told us, as we are dependent on the land, all life comes from land. Our food, clothing, everything that we have today comes from the land. “
Dann described how Barrick and other gold mining companies are destroying sacred places of the Western Shoshone.
In Horse canyon, she has seen as many as ten drillers, drilling to see if any gold is left.
“When you see ten drillers, you know there’s gold. Recently I read in the newspapers there’s eight miles of gold somewhere in there that they have found, which means they are going to rip the whole country apart.
"If anybody has seen an open pit mine, it is sad to see.”
“And think as an Indigenous Person, how it must hurt our Mother to have her ripped apart by gold mining companies and others that drill for things under her skin and through her body. It’s sad to look at these things and then try not to believe this is really happening, but it is.
“It’s happening all over where there’s mining,” she said, including areas where there is copper and silver mining.
“They are trying, getting water applications from the state of Nevada to get the water rights to pump water.”
Now, she said, white ranchers are beginning to oppose the mining because of what will happen to the water.
“It’s time, I say, a lot of people are waking up. Mining destroys water.”
Water is the life of future generations
“And it’s a shame, we as Indigenous People, we know water represents life. And when we see that type of water being pumped out we know life is pumped out, maybe not ours, but the life of our future generation that’s not here yet.”
“We have to look at these things.”
“But how do you stop such going on.”
Dann said she believes in civil disobedience.
“And I do believe in civil disobedience among our own people. There’s a lot of other friends other colors of people that are more than willing to help.”
Although workers say people are trying to take their jobs away, Dann said that is not the case.
“We want to save the Earth for the future generations, their generations now.”
“But if they have children, like I told my own son in law, if you have any children, you better start thinking about what you are doing.”
“I said you know you have to protect the land, the earth, the water, protect all of these things that represent life. And if you cannot do so, you should not have any children."
Don’t bring them into the world to suffer.”
“They are the ones that will be suffering. They may not be able to produce children. If they have children, some of them may be deformed, we don’t know. We don’t know what can happen."

Nuclear Test Site and Yucca Mountain
“We also have a test site, where they test the nuclear bombs.” There is also the nuclear waste dump at Yucca Mountain.
“We have all of these things. We don’t approve of it; they certainly don’t come to us for approval. Maybe they go to tribal council I don’t know, I’m not a member of the tribal council, or belong to any so called tribe.”
“I don’t know the meaning of a tribe. I don’t know what a tribe is. When you attempt to read the Bible, they talk about tribes. To me it means a beginning of man to learn how to do things. And if we’re a tribe, is that where we are at? Is that what they talk about?
“There are a few words within our Western Shoshone that we can’t use; one is “tribe.”
“If you use a word wrong, it means we are like a four legged person or animal, that we are not fully developed as human beings.”
﻿﻿ “That’s my interpretation. I could be wrong. There’s words that when you use the English language, please understand the words you are using. Because when you use it this way, it might mean something else in another way. In this language, you have to know what you are talking about.”
A Nobel Prize for Courage
In his introduction of Carrie Dann, Ronald Trosper spoke of sisters Carrie and Mary Dann and their long struggle to defend and protect the Western Shoshone homelands.
“They have fought the United States government, the nuclear industry and gold mining corporations for a long time. And she has been leading her struggle for many years. She received the Right Livelihood Award in 1993, an alternative Nobel Prize for courage.”


Watch film trailer for American Outrage, the story of Mary and Carrie Dann:

Article author Brenda Norrell: brendanorrell@gmail.com
at May 15, 2012 No comments:

Partnership for Civil Justice Fund: Documents Show Massive Nationwide Monitoring of Occupy Movement
Censored News
Documents just obtained by the Partnership for Civil Justice Fund show massive nationwide monitoring, surveillance and information sharing between the Department of Homeland Security and local and federal authorities in response to the Occupy movement.
The Pentagon's Northcom was notified about Occupy Oakland's port shutdown. DHS was in communication with the White House when it denied involvement in the Occupy crackdown.
The PCJF, also on behalf of author/filmmaker Michael Moore and the National Lawyers Guild Mass Defense Committee, made a series of FOIA demands regarding law enforcement involvement in the Occupy Crackdown, according to PCJF.
"These documents show not only intense government monitoring and coordination in response to the Occupy Movement, but reveal a glimpse into the interior of a vast, tentacled, national intelligence and domestic spying network that the U.S. government operates against its own people," stated Mara Verheyden-Hilliard, Executive Director of the PCJF.

The heavily redacted documents, only scratch the surfact and don't tell the whole story, Verheyden-Hiliard said.
DHS went so far as to keep the Pentagon's Northcom (Northern Command) in the intelligence loop in advance of the November 2nd port protests organized by Occupy Oakland and supported by ILWU workers. In a "Significant Incident Report" DHS officials were "advised that this [port] closure is a combination of Longshoremen dissatisfaction of working conditions...and to show support for the Occupy Oakland Protest."

A sampling of documents reveals:

Read more at the Partnership for Civil Justice Fund: http://www.justiceonline.org/commentary/dhs-releases-more-documents.html
at May 15, 2012 No comments: