Rio+20: The untold story of traditional Indigenous in Brazil


What happened when traditional Brazilian leaders and chiefs, without expense accounts, arrived at RIO+20?
Rebecca Sommer tells the story 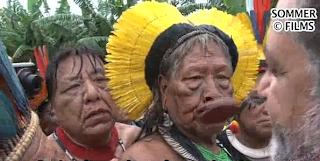 What happened when traditional Brazilian chiefs and leaders arrived, without expense accounts, to inform the United Nations at Rio+20 of ongoing violations of Indigenous rights in Brazil? Rebecca Sommer, who remains in Brazil, tells the story in words and video.

"Most traditional chiefs and leaders had no credentials to enter and participate. The traditional leaders were also very disappointed by the indifference of the UN High Commissioner on Human Rights that had not responded to their request for a meeting with her during the Conference," Sommer said.

Sommer describes how the United Nations failed to honor, and listen to, Brazilian chiefs and leaders at the UN Conference on Sustainable Development in June. 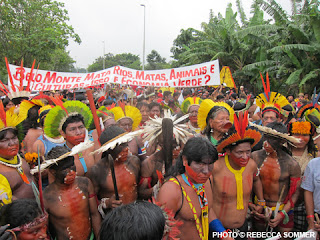 "In my view, they had the greatest disadvantage. The grassroot Indigenous Peoples and their chiefs from Brazil, were not shipped by financed buses and had no per diems and hotels paid."

During the summit, the Declaration of the Indigenous Peoples Global Conference on Rio+20 and Mother Earth was released. It describes the commodification of nature by the "green economy" and continuing colonization since the first Rio gathering in 1992.

"Since Rio 1992, we as Indigenous Peoples see that colonization has become the very basis of the globalization of trade and the dominant capitalist global economy. The exploitation and plunder of the world’s ecosystems and biodiversity, as well as the violations of the inherent rights of Indigenous Peoples that depend on them, have intensified." (Read Declaration below.)

The Declaration of the Peoples Summit at the Free Land Camp described the destruction of Indigenous lands in Brazil, the murders of those defending their lands, the false climate solutions of carbon credits, and the need for a new society to carry forward civilization. This Declaration describes living well with respect for Mother Nature. (Read below.)

Sommer's video from the grassroots Indigenous at RIO+20 in June tells the story of grassroots Brazilian chiefs and leaders:

Dear all,
Here is our audio-visual report that I filmed at the Free Land Camp (Alternative space for Indigenous Peoples of Brazil) in the Peoples’ Summit during Rio +20.
VIDEO:  http://www.youtube.com/watch?v=c4sTminBWFY 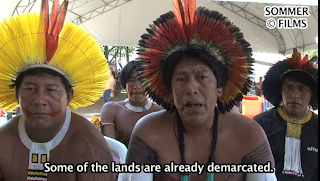 As I haven't really filmed that much, the video shows only a bit of the struggle of the Brazilian Indigenous Peoples for the UN and the Brazilian Government to hear their grievances and demands, since most of them were almost excluded from the official discussion of the Rio+20 UN Conference. The video is of the protest march and occupation of the headquarters of BNDES against the construction of Belo Monte Hydroelectric dam. There is also the protest march in front of the Rio Centro, Place of the UN Conference in Rio +20, with the goal to deliver their Indigenous Free Land Camp Declaration.
Most traditional chiefs and leaders had no credentials to enter and participate. The traditional leaders were also very disappointed by the indifference of the UN High Commissioner on Human Rights that had not responded to their request for a meeting with her during the Conference.
There have been three indigenous groups, that created three different Declarations.
Link to the  Indigenous Peoples RIO+20 FREE LAND CAMP DECLARATION (in English):   http://earthpeoples.org/blog/?p=1992
In my view, they had the greatest disadvantage. The grassroot indigenous peoples and their chiefs from Brazil, were not shipped by financed buses and had no per diems and hotels paid.
-- Rebecca Sommer in Brazil

Sommer also reports from Brazil on how Indigenous Peoples of Mato Grosso closed roads in protest against Decree 303 that eliminates indigenous rights http://earthpeoples.org/blog/?p=2321

(non-officialtranslation into English by Earth Peoples)

PEOPLES' SUMMIT FOR SOCIAL AND ENVIRONMENTAL JUSTICE
AGAINST THE MERCALIZATION OF LIFE, IN DEFENSE OF THE COMMONS


We are very excited to announce that Outta Your Backpack Media & Taala Hooghan Infoshop have joined forces with a new non-profit group called Siléí Community Empowerment Project to carry our visions of more just and healthy communities forward.


We need your support to purchase a center for art, activism, and community in Flagstaff, AZ!


Please watch the video about our endeavor & then help support our crowdfunding campaign at www.rockethub.com!
Video: http://www.youtube.com/watch?v=FfbR3rTkvbs&feature=share&list=UUxcUQ5NVyH2-vjTGx0bZulQ


How you can support:


•        Lend funds for Initial Costs (Contact us at sileiproject@gmail.com for more info)


•        Attend or volunteer at any of our community fundraising events! 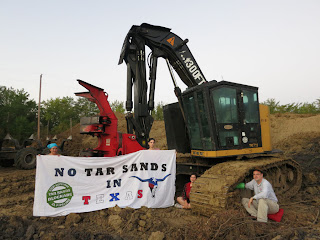 
It’s after lunch now, so we’re gonna follow the lead of our contractor and police friends and call it a day! But don’t believe for a second that we’re hangin’ up our hats!
Our 3rd action has been a huge success, and we’re only going to continue standing up for our friends and neighbors by calling fraud what it is – fraud. Tar Sands-sourced diluted bitumen slurry is not crude oil. It’s an exotic, radically toxic hydrocarbon surface-mining product that we will not permit to travel across our homes and freshwater sources without a fight!
Onward with keepin our homes safe!
UPDATE – 11:00AM: WE WON! All Law Enforcement Has Left the Scene!

WE WON! Guess they realized our brave Blockaders aren’t the real criminals! The few workers on site are filing out as well. We’ll be holding down the fort just to be sure!
***UPDATE – 10:45AM: Police Are Accusing Blockaders of Equipment Theft
Worst way to “steal” equipment EVER. Just sayin’… 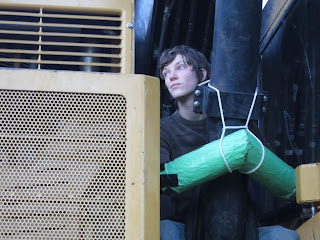 ***UPDATE – 9:30AM: 3 Hopkins Co. Sherrif’s Deputies Arrive on Scene more than 2 Hours after the Fact
Blockaders are holding strong!
***UPDATE – 9AM: 20 Workers Show Up, Are Turned Away from Site!
7 trucks with 20-25 workers showed up at the site to meet their Foreman only to be turned away. One truck with a ditch witch continued on to the easement. ALL truck plates were out of state plates including Oklahoma, Tennessee, and Pennsylvania. Local jobs anyone?
7AM – BREAKING! 3 Blockaders Locked to Equipment Halt Work at Another Keystone XL Site!
Landowner advocates lock selves to feller buncher machines in KXL easement’s path of destruction!
SALTILLO, TEXAS – September 5, 2012, 7AM – Three landowner advocates and climate justice organizers have locked themselves to feller buncher machines used for clearing large trees in the path of the Keystone XL pipeline. Today’s action has halted work on a segment of TransCanada’s illegitimate pipeline outside of Saltillo, TX. As promised, Tar Sands Blockade’s rolling campaign of nonviolent civil disobedience pushes forward.
Five blockaders total are currently risking arrest to stop work on this segment of the Keystone XL pipeline. Contractors discovered their presence early in the work day, and work at the site was called off shortly thereafter. Texas-born blockaders have united with neighbors from other states to support rural and neighboring communities threatened by the toxic pipeline’s diluted bitumen slurry.
Go to website for updates and more:
http://tarsandsblockade.org/3rd-action/
at September 05, 2012 No comments: