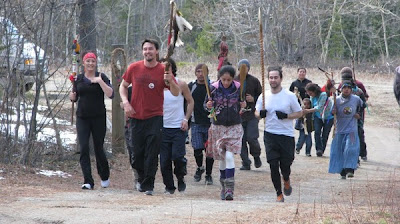 Hector Cerda, Peace and Dignity Journeys Route Coordinator and Runner, said in a statement, "Finally I am asking that Kay County Sherriff submit a written apology to the Peace and Dignity Journeys Runners, S.P.I.R.I.T. and all Native American folks of the state of Oklahoma for the desecration of our ceremonial staff. I also ask that they demonstrate how they are training their officers to learn about sacred ceremonial items that Native American tribes use during spiritual walks, runs and journeys that have been happening in this region since time immemorial."
Update read more: http://www.examiner.com/article/what-really-happened-kay-county-to-the-peace-dignity-journeys-runners

Please note and take action on the ridiculous treatment of our indigenous people in Oklahoma and the red-neck mentality toward our esteemed guest. A sacred Eagle  Staff desecrated and a runner handcuffed by local police near White Eagle!
Yesterday evening our Peace and Dignity Journeys Guests were accosted by the local police in Kay County according to Hector Cerda, the PDJ coordinator.
Cerda said the runners were coming into White Eagle, they were about three miles away. He was in the van picking up runners to take into the host site. This particular runner, a citizen of the Mohawk Nation, had been running by himself on Highway 177. When Cerda came upon the scene there was a police car with their lights on, two officers, a civilian vehicle partially blocking the roadway and the runner, handcuffed in the backseat of the police car.
The runner’s eagle staff lay on the ground off to the side.
According to Cerda, the police told him that they had received calls that there were “people running down the road with weapons and tomahawks”. The police said they feared for their safety because there had been a lot of break-ins in the area lately. When the officers came upon the runner they felt like they were in danger because he held the eagle staff in his hands. The staff is about 2 feet long, is painted red, has fur around it, topped with deer antlers and adorned with eagle feathers; an Eagle Staff.
The runner states the police drew their guns on him. There were two of them, one held a shot gun and the other a pistol. They then cuffed him and put him in the police vehicle. The police never asked any questions or inquired as to what the runner was doing with an eagle staff. Cerda himself, said he stood talking with the officers, his hands held high with his fingers apart because he felt threatened. The police asked Cerda for his name and date of birth, and ran a background check on him as well. After some time, both Cerda and the runner were released and allowed to leave the scene.
Deputy Chris Hand was the officer who apprehended the Peace & Dignity Journeys runner. Everette Van Hoesen is the Kay County Sheriff, Steve Kelley is Undersheriff, and their phone number is 580-362-2517.
We in Oklahoma state this mistreatment and harassment of our indigenous people should not be allowed to continue. At the very least, cultural awareness is severely lacking, not only in this case but across the state. This is typical of the type “law enforcement” our indigenous citizens endure in Oklahoma.
Please, as the brave warriors, who are running this mission to reunite the Eagle and Condor, for the purpose of “Water”, support them, encircle them with your presence and most of all protect them from this type of stupidity happening again.
at September 07, 2012