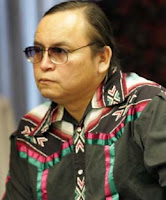 Terrance Nelson, former Roseau River chief in Manitoba, made allegations today of vote buying in an e-mail to the Prime Minister.

Further, Nelson said a First Nation delegation leaves for Iran on Oct. 8 and will ask for the lives of three Canadians on death row. In his previous statement, Nelson said the delegation will also show photos of the massacre of Wounded Knee.

Nelson’s morning e-mail has brought a dramatic reaction already.
Among the allegations, Nelson questioned if there was a payment of $25,000 for a chief to distance himself from Nelson.

Updates from APTN on Oct. 1, 2012
Allegations bring threats to Terrance Nelson and others
http://aptn.ca/pages/news/2012/10/01/aboriginal-affairs-official-threatens-legal-action-over-allegations-of-afn-election-meddling/

Dear Prime Minister
An accusation has been made against the Harper Government of vote
buying. Chief Nelson Houle of the Ebb and Flow First Nation in
Manitoba delivered a public speech at the Treaty 1-11 Gathering in
Brandon Manitoba in front a large audience in which he said that he
was asked to attend a breakfast meeting at the Fairmount hotel on the
morning of the Assembly of First Nations election. He stated in his
speech that he met with two Ministers and two Aboriginal Affairs
people. They were very concerned with the possibility of my being
elected National Chief. Chief Houle's speech is on record. He stated,
"I should have took the deal".

Chief Morris Shannacappo of Rolling River First Nation who was Grand
Chief of Southern Chiefs Organization at the time of the AFN election
in Toronto has accused Regional Director General Anna Fontaine of the
Manitoba Regional Aboriginal Affairs of paying $25,000 to have him
"distance" himself from me. He has made the accusation that he was
told "Chief, the door will be open for you and your community".

These are very serious charges to be made in public by the Chiefs in
question. Your government has always stated that accountablity and
transparentcy are your goals. Was there a $250,000 contract paid by
the Assembly of First Nations to the person who nominated Shawn Atleo
for National Chief. This was a question put forward by Chief Wallace
Fox of Onion Lake Saskatchewan. The Regional Chiefs from the Assembly
of First Nations who I have asked to verify or deny the existence of
that contract are telling me that they are not being given the
information on various contracts by the AFN.

Pam Palmater another candidate delivered a speech this week to Chiefs
making an accusation that $20 million was committed by the Minister of
Aboriginal Affairs to various First Nations to influence the AFN
election. These are public statements being made at various gatherings
of Chiefs.

For an RDG of the department of Aboriginal Affairs in Manitoba who is
in charge of almost a billion dollars of federal funding to meet with
Chiefs and try to infleunce the vote at the Assembly of First Nations
is a very serious charge. Did Anna Fontaine make such statements and
did she try to buy votes with Canadian federal funding? More
importantly, was this a directive given by your government to
Aboriginal Affairs?

You and I differ greatly on the Iran/Israel issue. I support the right
of Israel to exist but I don't support another war, this one against
Iran. As I stated to the Chiefs in my speech at the July 2012 AFN
election, I will travel to Iran whether I am elected National Chief or
not. As a person who organized a First Nation trip to Iraq in 1998, I
saw first hand the suffering of the Iraqi people. My You Tube video, A
war on children, depicts what we saw in Iraq. I have condemned United
Nations economic sanctions as genocide and I will continue to condemn
economic sanctions as an evil. The fact that the United Nations found
in a 1995 study that 567,000 Iraqi children had died in the first five
years of economic sanctions is proof of evil. When half a million
Iraqi children die, how can we condone economic sanctions as a milder
form of war.

Your government cutting funding to the Assembly of Manitoba Chiefs,
our Manitoba voice for First Nations will affect the way they work
with your government. To cut 81% of their funding is an attempt to
silence the Chiefs of Manitoba. I hope that I am not so egotiscal as
to believe that your only reason is that AMC supported my bid for
National Chief but we do need to get to the bottom of why these cuts
are being made.

A small First Nation delegation will leave to Geneva on October 8th
and we will fly to Tehran on October 11 from Geneva. As we cannot get
our visas in Ottawa anymore, we will get them in Geneva. I intend to
ask for the lives of the three Canadians on death row in Iran. I have
no illusions. I will ask, that is all I can do. A lot of the Chiefs
seem scared of the trip to Iran but regardless if we are to break the
60 to 95% unemployment on First Nations in Canada, we must go beyond
Ottawa. Whether OPEC nations are prepared to work with First Nations
in Canada remains to be seen.

It appears your government is closing doors on dialogue. I will not
support a war on Iran. There are some of us in North America that do
not see the need for another war. I attach a link that puts a
different view forward. I don't always agree with everything that is
being said but free speech is a right and it is a responsibility.

I recieved an email from RDG Anna Fontaine and will respond to both
your email and the RDG's at the same time.

I did not have third party hearsay evidence on this matter. The speech
made by Chief Nelson Houle of Ebb and Flow First Nation was recorded
at the Treaty 1-11 Gathering. He made the statement that he met with
Ministers and Aboriginal Affairs officials. This is a matter of
record. There was also hundreds of witnesses who can verify the text
of his speech. If this does get to court or to a parliamentary
inquiry, Chief Morris Shannacappo will be testifying under oath as to
what he stated to me and a number of other people.

This afternoon, Dean Fontaine, the husband of Anna Fontaine has
admitted to a reporter that he phoned Gerald McIvor on why McIvor had
sent out copies of my earlier email to press etc. I also recieved a
very nasty message this evening from RDG Fontaine's in law. I have it
on tape.

A few years ago former RDG for Mantioba, Mary Blais was marched out of
her office alongside two other Indian Affairs senior personel. She
recieved a substantial settlement and apparently is under a gag order
as part of her settlement. Why is there so much secrecy? Can Mary
Blais and other Aboriginal Affairs staff testify in a parliamentary
inquiry on this issue. The workings of the Regional Department of
Aboriginal Affairs in Manitoba must be accountable and transparent. At
least, the Conservative Government has always stated that Chiefs and
Councils must be accountable and transparent, why not the government?
Accusations are made every day against Chiefs and Council members, do
the courts ever hear a defamation lawsuit, why is it defamation if I
ask questions, did Aboriginal Affairs staff or Ministers, Deputy
Ministers meet with Chiefs to discuss the AFN election. Did they
influence how Chiefs should vote?

Did Shawn Atleo or members of the AFN authorize a $250,000 contract to
Ovide Mercredi as Chief Wallace Fox has questioned. Why can't this
question be answered? Did Ovide Mercredi meet with Chiefs in northern
Manitoba to lobby for Shawa Atleo? Was he paid to do this? These are
simply questions. Anna Fontaine states clearly, "I have never ever
promised anything for votes for anyone". Okay RDG Fontaine denies any
wrongdoing. Now, does she deny meeting with Chiefs in Toronto and did
she at any time discuss the AFN election with Chiefs? What Ministers
and Deputy Ministers met with Chiefs in Toronto and did they discuss
with Chiefs, the AFN election?

It seems to me that if you have $10 billion every year that the Chiefs
and their communities need that it would not be hard to influence
their vote, they would be listening to you if you mention who you like
working with. It is not about Anna Fontaine and whether or not she is
a good person, it is about the appearance and perhaps the reality of
vote buying. Do you Ron Hallman as Senior Deputy Minister state for
the record that none of your Aboriginal Affairs staff met with Chiefs
in Toronto? Are you saying that no Minister or Deputy Minister met
with Chiefs in Toronto?

If you want to go to court on this, that's fine. I have not made an
accusation against anyone, I am repeating what was stated by Chiefs
and I am asking questions. If that is illegal, let us go to court and
we can have AANDC staff and Ministers and Deputy Ministers testifying
under oath. I have nothing to hide, do you?

"Today Uncle and Auntie and family are going behind the walls to the big house with a large yard to attend a Round Dance Ceremony with the Brotherhood, my niece said this is now 10x going behind the walls and my lil 6yr. old nephew Keegs is loved by everyone in there and wants to hand drum some songs he has been practicing, they may be down but to the Dreaver's they are not forgotten, the State of Canada has every intention of incarcerating half or more of the total Indigenous male population within 5-10 years they have begun with the Child Welfare Agencies, Group Homes and Centers to Institutionalize and further Cultivate, abuse, brutalize and tattoo. I have not pity for the State whatever befalls it is mere Karma, we need these Men out here as Mooshums, fathers, uncles, brothers, sons, true warriors as we have to many men running around pretending to be healers right now, most men inside were raised in care of the State, they would sooner rob, rape, steal, spend the rest of their Lives in Prison, die with a syringe in the neck than spend one more day in a Society that has brutalized them, their Parents, Grandparents and Indigenous Nations for far too many Generations, some may escape with a Feather, a Braid of Sweetgrass, a Ribbon Shirt and Head Band, there are true woma out here brothers I have seen them at the Ceremonies, they stand alone if your true and honest they will you will help you become arrows, spears, guns, to provide and protect, may we all enjoy the Great Peace, may it hold for the children ♥ My observation of my Northern Plains Cree family is my teachings, my Uncle gets sick with worry when he shares his frustrations, yesterday he was in the hospital, today he makes his best effort to go inside and share his new songs, his vision, heart and spirit in hopes of 'inspiriting,' even just one spirit to grow with their heart, I share these today, observations=listening, watching, learning, by the example shown to me, took along time for me to wake up and see what is great about this life, what it is to give humbly, he wants to help out a Law Firm that is helping the Elders I will do whatever I can and use all that have been blessed with to assist as a helper, 'waskapio' ♥"

Travel safely strong brother so grateful to know you, know that there are many who will stand with you Hai Hai Kichi-Meegwetch, arrow straight energy of prayers and strength guide you in what you have to do you are not alone, ever <3

Within the Spirit of Mistawais Iron Buffalo of the Plains!