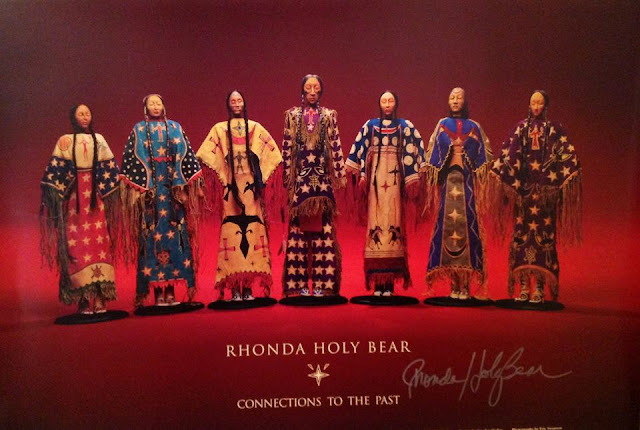 There were 938 shares of this poster on Facebook as soon as it was posted. Rhonda says, "I am stunned!" Poster copyright Rhonda Holy Bear.
Rhonda Holy Bear Lakota Doll Artist
Posted with permission at Censored News
http://www.bsnorrell.blogspot.com

Rhonda Holy Bear is an enrolled member of the Cheyenne River Sioux Tribe. She was born in South Dakota, at Old Cheyenne River Agency--also known as "Chief Martin Charger's Camp." Rhonda grew up in extreme poverty and was raised mainly by her grandparents, DeSmet and Angeline [Soft] Holy Bear. Rhonda's earliest dolls were a hammer and a clothespin. She sometimes even dressed up her cats and dogs and pretended they were babies. One day, she made a doll from some scraps of cloth she found around the house. "Look Grandma! I made a doll!" she said, handing her creation to her Grandmother Angeline, who was almost completely blind. Her grandmother examined the doll in her hands and told Rhonda the story that has inspired her to create dolls to this very day:

Rhonda's Grandma, Angeline, had been orphaned as a young child and had been raised by her Grandmother. Angeline's Grandmother, like many of the women of her time, was skilled in the traditional arts of quilling and beading. Around 1923, when Angeline was 5 years old, her grandmother brought her to a tribal gathering in South Dakota. Some affluent tourists visited their tipi. They had a little girl who was similar in age to young Angeline. While the adults talked in the tipi, the two little girls played with a traditional Lakota doll that Angeline's grandmother had made for her. Angeline loved that doll as if it were her little friend. It was made of buckskin and was adorned with beadwork. Grandmother had even stitched clippings of Angeline's hair to the doll's head.
Read more
http://www.rhondaholybear.com/
Thanks to Rhonda for allowing Censored News to share this. The above poster can be ordered at:
rhonda@rhondaholybear.com