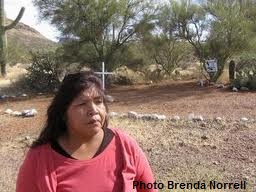 
As usual, a Finding of No Significant Impact was declared in an August report, despite the fact that saguaro in the region are home to the federally protected species of the lesser long-nosed bat. The proposed three-acre US Border Patrol complex would include a helicopter launch pad, housing, horse corrals, canine pens, communication tower and remote surveillance tower.


The site in Pisinemo District is an alternative because O’odham rejected the complex in the communities of Dirtburn and Kupk on Tohono O’odham land, according to the federal document.

Although the plan has been intentionally concealed, the public comment period ends on Tuesday, Sept. 18, 2012.

The massive complex would add to the noise and pose more risks to local O’odham from helicopters, increased pollution, increased water usage by the Border Patrol, and disturb the fragile land of the Sonoran Desert. Further, more O’odham land would be seized for the corridor for a separate electrical transmission line which would be constructed to the north, according to the documents.


﻿
Already O’odham are protesting the militarization, constant harassment and abuse by US Border Patrol agents here. An O’odham was beaten in front of school children at a school bus, and other agents have held O’odham women and elderly at gunpoint. Still other border agents have shined flashlights into O’odham women’s homes at night, stalked O’odham women, endangered O’odham lives with high rates of speed and destroyed the fragile desert with off road vehicles. Further, the constant spying and searches by federal agents have left many O'odham living in a state of fear.

O'odham protesting the US Border Patrol say they can not depend on their tribal government to protect them because it has been coopted by the US government.

﻿﻿Hundreds of US Border Patrol agents have been arrested for drug trafficking and conspiracy. The US ATF has already been exposed for Project Gunrunner, which has supplied cartels with assault weapons since it began in 2005 in Laredo, Texas, then expanded to the Arizona border.

The precious drinking water supply of the Oglala Lakota people will be overlapped more than a few times if TransCanada gets its way and the US State Department approves its second attempt to get a permit to build the Keystone XL pipeline. The pipeline will enter this big land in Montana, come south and skirt the Cheyenne River, Pine Ridge, Lower Brule, and Rosebud Reservations before it enters Nebraska.
Recently, TransCanada revealed its “new” route through the sandhills of Nebraska, keeping their budget in mind, they diverted a total of 20 miles. There is sandhills land on the Pine Ridge in the LaCreek District. The KXL pipeline will be buried into the Ogllala Aquifer, in numerous places when one digs a few feet down, water rises.
﻿ Our Lakota people, and people all over South Dakota, depend on the Rural Water Pipeline, or Lyman Jones as it is called off-reservation. It crosses the Lyman Jones in 43 places. It crosses our water pipeline to the Pine Ridge at least twice.
﻿﻿﻿﻿ The KXL will carry dirty crude tarsands oil from the mines near the Ft McMurray area of Alberta, Canada. Much of the pristine Boreal Forest has been totally decimated, strip mined to bare dirt, to get at the tarsands oil deep in Mother Earth. The oil miners use 3 to 4 barrels of drinking water to produce one barrel of oil, and stores billions of gallons of waste water in huge waste water ponds. It is a secret what chemicals they use to dilute the heavy crude! However, a VietNam Veteran knew that some of the chemicals are the same as what was used in Agent Orange, revealed in a meeting with the US State Dept I attended last spring in Washington, DC. That VietNam Veteran is from here on the Pine Ridge. Maybe he will come and speak out!
Owe Aku is hosting a series of “Sacred Water Protection Teach Ins” across Lakota Territory, the first will be held at our own famous Billy Mills Hall in Pine Ridge Village on September 26, 2012 and at Kyle on September 27, 2012 at the Church Hall, both begin at 1pm. On both dates, there will be guest speakers and a lot of handouts to share FACTS on the tarsands oil mine, the KXL oil pipeline, and the historical and cultural Lakota land sites that TransCanada plans to cross. Tribal officials will be speak on these significant landsites, allied organizations who also work to protect drinking water and Mother Earth will be speaking, and we will have slideshows to share images from the tarsands oil mine and other water destruction mining and mining-related activities.
We will have handouts that describe how each Tribal Government plans to protect their Homelands, and we want to generate a discussion on how we can all work together to protect our sacred water, Mother Earth, and coming generations. We will share images of how people in Texas are protecting their ranches, farms and neighborhoods from TransCanada’s KXL oil pipeline, and from heavy haul trucks carrying equipment across our Homelands, as well the river hauls in BC Canada.
Info will be available regarding the impacts of oil mining using the hydrofracturing (fracking) method, a technique that is being banned around the world, yet is being practiced all over this big land. There is recent discussion on the Pine Ridge regarding fracking near our northern border and on the Reservation as well. Several tribal candidates are already discussing how the Oglala Sioux Tribe must prepare for oil ‘fracking’. We want to give folks an opportunity to voice their opinion on this crucial topic.
An update on the uranium case against Cameco, Inc. In Situ Leach uranium mine in Crawford Nebraska, as well Cameco’s plans for three new uranium mines will be discussed.
There will be time for Traditional Headsmen to speak regarding these mining issues and to lead the discussion on a statement from all those in attendance regarding the protection of our sacred water, Mother Earth and coming generations, after all, we protect this sacred water for them, it is their water. Mni wicozani, through water there is life.
Oglala musicians Scatter Their Own will share their awesome indigenous music, and a drum group will share their songs. A feed will follow, and there will be beverages and snacks all afternoon. The “Sacred Water Protection Teach In” is open to all people, everyone is encouraged to attend, learn what you can, share what you know, be part of the statement made on these dates! Bring your friends, relatives and neighbors.
For more info call Vic Camp at 605-407-7808 and Alex White Plume at 605-455-2155, or look up the “Sacred Water Protection Teach In” event page on Facebook.

﻿
﻿TOHONO O’ODHAM LAND – On the border, Klee Benally, Dine’, says the terrorism against Indigenous peoples by the US government includes the militarization of Tohono O’odham land in southern Arizona, and the desecration of sacred San Francisco Peaks in northern Arizona.
﻿ On the Tohono O’odham border, where the US Border Patrol speeds down dirt roads, cutting into the dry and fragile desert earth, and border agents abuse O’odham on their own land, Benally said, “For me this is a deep issue of colonialism, settler colonialism, and state violence, really state terrorism.”
"This is one of the many ground zeroes of the colonial wars against Indigenous Peoples," said Benally of this area, one of the deadliest for Indigenous Peoples and other migrants who walk north through the Sonoran Desert in hopes of a better life. It is also a region where the US border, US militarization and border laws, violate religious freedom rights and the ceremonial passage of O'odham on their lands in the US and Mexico.
“Recently there was a marked anniversary of the Sept 11 terrorist attacks on the US. But there have been many Sept 11ths for our communities,” said Benally, Navajo, as he joined Amy Juan and Alex Soto, both Tohono O’odham, on the border on Saturday, on the Tohono O'odham/Mexico border.
“Right now we as Indigenous Peoples don’t have guaranteed protection for our religious freedom because our sacred sites are under attack.”
“Indigenous communities here don’t have that same freedom of movement that is essential for their cultural continuity. These are the types of attacks that also need to be addressed,” said Benally, referring to the militarization, border restrictions, and the abuse and harassment by US Border Patrol agents.
“This is the type of state terrorism that needs to be confronted and it is hard to do it in the context of these social and environmental justice movements that continue to further ‘invisibilize’ who we are as Indigenous Peoples.”
Benally said that part of the work underway, being carried out indirectly and directly, along with networking, is to intervene and address these issues in both the progressive liberal media and the corporate media, and at the same time, in the social and environmental justice movements.
“We’re here to say, hey, we are still here as Indigenous Peoples. We can’t further be invisibilized -- especially in the context of these attacks of state terrorism against our people and our lands.”
“Right now as we’re here, San Francisco Peaks are being desecrated with the state sanctions by the US Forest Service and the US Department of Agriculture.”
Benally spoke of the destruction of the old growth forests underway and the long protested plan to use sewage water for snowmaking for tourists at Arizona Snowbowl on sacred San Francisco Peaks. The Peaks, sacred to 13 area Indian Nations, is a place where medicine men conduct ceremonies and gather healing plants. Earlier, Benally was among the Navajos and other Native Americans who locked down to equipment in protest in the Protect the Peaks movement.
As the abuse of the land and the people continues, the US offers superficial "listening sessions." On the border Benally said, “Even though the Department of Interior is holding sacred sites listening sessions to reconsider their sacred sites policies, on the one hand, they are still supporting and sanctioning the desecration of our sacred lands, which is cultural genocide.”
“What is really at stake here is our cultural survival as Indigenous Peoples.”
“Part of the challenge for us as young people is to step up and to take that responsibility to address these issues and to get justice for our people”
Watch this video interview of Klee Benally on the border:
http://www.bsnorrell.blogspot.com/2012/09/on-tohono-oodham-border-video.html
Article copyright Brenda Norrell, For permission to repost in full; brendanorrell@gmail.com
at September 17, 2012 No comments: