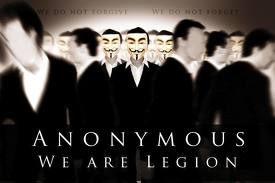 Anonymous has hacked Monsanto again. This time the World Wildlife Foundation is exposed for certifying the areas where genetically modified products are grown.
Here's an excerpt from Operation Green Rights:

With this operation we want to put on the same level Monsanto and a world organization that we were taught to appreciate: the World Wildlife Foundation. STOP the World Wildlife Foundation!!! The World Wildlife Foundation certifies all the genetically modified products of Monsanto, the World Wildlife Foundation certifies that the areas where the genetically modified products of Monsanto are grown, in south America and Asia, are subjected to "sustainable deforestation", the same areas ripped from the forest for the building of Highway RS163 (a way to transport the biggest traffics of the planet, from cocaine to Niobium), or for the construction of tens of power plants arising in the Amazon, like the dam of Belo Monte which we harshly fight. STOP to the "green Mafia", to this facade ecology, aimed to make pleasant to the public opinion the biggest filthiness of the planet. STOP making believe the whole world that an alternative does not exist. We are coming, We are anonymous We are Legion We do not forgive We do not forget Expect us!
Read more: http://privatepaste.com/5ec43bc888

ANCHORAGE -- Last week, Center for Water Advocacy (CWA) asked the Director of the Alaska Division of Spill Prevention and Response to reconsider and deny the Division’s approval of the Oil Discharge Prevention and Contingency Plan for Buccaneer Alaska, Inc.
“The State of Alaska failed to notify traditional hunters and fisherman in Cook Inlet," says Jess Lanman of Cook Inlet Marine Mammal Council.  “The critical habitat and cumulative impacts of oil and gas activities to Endangered Cook Inlet Beluga Whales have not been adequately addressed by the increased oil and gas activities sanctioned by the State of Alaska.”
The Marine Mammal Protection Act (MMPA) and the Endangered Species Act (ESA) have special provisions for consultation with Alaska Native marine mammal subsistence hunters and fisher peoples.  Delice Calcote,Executive Director of Alaska Inter-Tribal Council (AITC), says“indigenous peoples and tribal communities must be notified with Free, Prior, and Informed Consent before any oil and gas plans are approved by the State of Alaska that impact our subsistence resources.”
The Request for Informal Review was based on concern that the State is ignoring it’s own standards requiring that such plans include“Best Available Technology.”
Harold Shepherd, President of CWA, says “Buccaneer's plan fails to address the appropriate application of relief wells as the primary means of avoiding the disastrous impacts that a major oil spill or blow-out would have on Cook Inlet’s valuable fisheries and marine resources”
“The Cook Inlet is home to a multitude of fish and wildlife species, including beluga whales, which are protected under the federal Endangered Species Act,” says Carl Wassilie, Biologist with Alaska's Big Village Network. He also says that “Cook Inlet is an important marine and aquatic environment for subsistence uses by Alaska Native peoples and indigenous communities.” He adds, “thecommercial and sport uses of Cook Inlet fisheries are not only important for the local, regional and state economies; but the bio-productivity and sustainability of Alaska's resources for future generations.”
The potential impact of a blowout and oil spill is increased because the EPA and the state of Alaska do not require Zero Discharge standards in renewing Clean Water Act permits for Cook Inlet oil and gas development.
CWA, therefore, ,recommends that DEC “not approve” the Buccaneer's Plan. This is the best means of insuring that Buccaneer”s development of oil and gas resources in Cook Inlet is safe and environmentally sensitive.
Alaska Division of Spill Prevention and Response Director, Larry Dietrick, must respond by Friday on whether to grant a review or not on the groups'request.  If so, he has another week to make a final decision on CWA's request for review of the Oil Discharge Prevention and Contingency Plan for Buccaneer Alaska, Inc.
“If the review is not granted, it would be another example of the State of Alaska to exclude the public on decisions impacting fish, wildlife and human health,” says Walter Parker, former chairman of the State of Alaska's investigation on the Exxon Valdez Oil Spill.
at September 18, 2012 No comments: