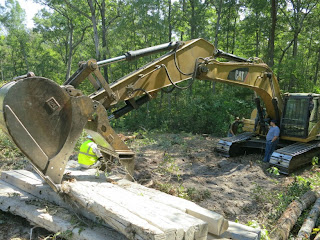 All work has been halted at a Keystone XL construction site outside Winnsboro, Texas. Two Texas-born blockaders have locked themselves to construction machinery, effectively halting all construction until further notice.

___
Two Texas-born Tar Sands Blockaders have locked themselves to a critical piece of machinery for Keystone XL construction in order to protect a tree village occupied by eight people in the tar sands pipeline’s path of devastation outside Winnsboro,Texas.
The two landowner advocates and climate justice organizers are risking arrest to delay deforesting work along the Keystone XL pipeline’s path, which threatens to destroy a magnificent tree village on property that TransCanada now claims ownership of through court action. The machinery involved, a backhoe, was being used to build a bridge across a gully in the massive path of destruction of the Keystone XL Pipeline. WIthout the bridge construction has effectively been halted for the day. Help spread this breaking story on Facebook and Twitter.
Please see the latest updates at the bottom of this post

TransCanada’s heavy machinery has clear-cut its way within just over 300 yards of the 80-foot tall tree house village occupied by landowner advocates in the pathway of Keystone XL just outside Winnsboro, Texas. The eight people in trees have held strong despite the advancing roar of TransCanada’s clear cutting machinery and are determined to hold their blockade as long as needed.
This action is to protect the eight people sitting in trees, as their blockade enters its second day – the longest halt to construction since Tar Sands Blockade, which organized the tree sit, began in August.

Lake Dallas, Texas-born blockader Shannon Bebe, 26, has united with Houston-native and small business owner, Benjamin Franklin, 34, to support rural and neighboring communities who feel abused by TransCanada’s extremely aggressive land grabs and threatened by their toxic pipeline’s diluted bitumen slurry.
Franklin, whose family traces its lineage to pre-independence Texas, relates, “As someone who has a religious dedication to nonviolence, I have a duty to assist nonviolent tactics. This is a path to change that works. I had a childhood spent in the piney woods of Texas, and they contain a beauty that haunts me, still. Driving up here and then walking amongst the trees and their sitters reminded me of the beauty I experienced in childhood. That in and of itself is reason to be here defending it.”
He continues, “The theft and destruction of people’s homes, the contamination that’s likely to occur once the pipeline is completed, and the release of the carbon bomb that is the Athabascan tar sands formation make the need for action now unignorable.”

Tar Sands Blockade is a coalition of Texas and Oklahoma landowners and climate justice organizers using peaceful and sustained civil disobedience to stop the construction of the Keystone XL tar sands pipeline. We have already successfully shut down Keystone XL construction for about two-and-a-half days in Livingston, Saltillo, and Winnsboro.
Watch the high energy video from our recent actions and sign up to join us.
“The risk of inaction is far greater than the risk of taking action – even risky action like this,” suggests Ron Seifert, a Tar Sands Blockade spokesperson. “We are committed to undertaking a campaign of nonviolent civil disobedience to stop construction of Keystone XL, and Tar Sands Blockade will continue to protect the Winnsboro tree village. It is a symbol of all the homes and families crudely threatened by this tar sands pipeline. Sometimes, one must simply stand one’s ground in the face of eminent threats like those posed by this dangerous pipeline in order protect the health and safety of their families, loved ones, and that of their neighbors.”

Three more law enforcement officers have joined the Wood County Sheriff at a Keystone XL construction site that has been effectively shut down by Texas born blockaders, Shannon and Benjamin. Join them in an upcoming action to help defend our homes form this toxic pipeline.
at September 25, 2012 No comments:


AIM-WEST proudly presents the American Indian Movement International Film Festival, to be held at the Brava Women’s Theater, located at 2781 24th Street, in San Francisco’s Mission District! The program begins at 12 noon until 10 pm with traditional dance, drumming and songs prior to the opening. The M.C. is nationally known AIM leader, Mr. Bill Means.
The films selected for this year’s festival, found in our website, exemplifies the legacy and spiritual movement of resistance, and the fight for self-determination found among indigenous peoples throughout the globe. Held each year on Indigenous Peoples Day (Columbus), the film festival offers an important educational alternative to the stories typically associated with the national celebration of Columbus Day in the USA, and what it means to Indigenous Peoples throughout the Americas.
The films selected this year will bring to light the scope and diversity of Indigenous peoples who claim their inherent rights throughout the world, documenting the strategies they are using, from armed resistance to the electoral process, to secure recognition of their rights, including treaties, agreements and other constructive arrangements made between nation/states and Indigenous peoples. The AIM-WEST International Film Festival brings a new sense of urgency to these struggles, especially in light of the global challenges of climate change, migration, poverty and social justice. Through these films AIM-WEST seeks to demonstrate the common bond between all Indigenous peoples as they struggle for equal justice and freedom.
This year the AIM-WEST International Film Festival will screen contemporary, provocative and interesting films. For example, we have included two Burmese films that depicts political prisoners held there (and ‘ethnic minorities’ aka Indigenous). One is about the multitude of prisoners held by the dictatorship, and another about the Nobel Peace Prize winner of 1991, Ms. Aung San Suu Kyi, who was recently released from 15 years under house arrest and just elected to the country’s Parliament.
Ironically, Ms. Suu Kyi will grace us with her presence in San Francisco on Saturday, September 29th. We expect that her arrival in town will increase interest and attendance at the AIM-WEST Film Festival. Another recent film to be screened and highly recommended is “Crooked Arrows” about the sport of La Crosse, the game of life, heart, and spirit of the Onondaga. This will be a first time screening on the west coast! Don’t miss it!

There will be vendors, food and refreshments, bring the family and kids!

Tickets are $12 at the door, sliding scale, no one turned away! Donations accepted.