BLACK MESA, Arizona -- The top global carbon emitters have been identified. It comes as no surprise that Peabody Energy is number 10 on the global list, poisoning the planet.

Peabody continues to poison the Navajo and Hopi homelands in the Southwest. The coal ripped from Black Mesa fuels the Navajo Generating Station on the Navajo Nation. The coal-fired power plant poisons Navajos, Hopis and others in the Southwest so that the cities of Phoenix and Tucson can squander electricity and the water that the electricity moves through the state. This was made possible by way of corrupt Arizona Congressmen, corrupt attorneys, corrupt Navajo politicians and the failed media that chooses to tap dance to advertisers and politicians rather than report the truth.

The Carbon Underground's new list identifies the worst carbon polluters on the planet and urges investors to divest.

Fossil fuel divestment campaigners have released a hit list of 200 companies from which investors should remove their money.
The new Fossil Free Index identifies the 200 largest public fossil fuel companies, based upon the potential CO2 emissions embedded in their reserves. These reserves are growing, as companies continue to explore for new sources of fossil fuels.
- See more at: http://www.rtcc.org/2014/05/01/campaigners-release-hit-list-of-200-largest-fossil-fuel-companies/#sthash.iVoexqzc.dpuf
. 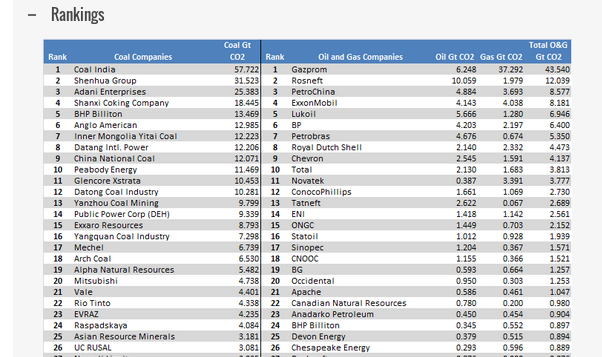 Also see this week in the news: Stanford student movement inspires university to divest from coal
http://ecowatch.com/2014/05/07/stanford-divestment-coal/
at May 07, 2014

I am cynical about 'Carbon Trading.' One tribe seems to understand what the real stakes are : putting a price on forests and jungles as a wedge for corporate control. http://www.watershedsentinel.ca/content/rejection-carbon-trading-indigenous-communities-kuna-revolution
But if you are spooked by predictions made without verification ( but there is a 'consensus' ! ) it may be time to ditch the idea that those who do not agree with the Intergovernmental Panel's representation are unscientific tools of polluters. That is an allegation without proof as well - about the proposition that there should be a global tax on fire.
Perhaps not.
http://oldephartte.blogspot.ca/2014/05/responsible-climate-legislation-no.html