SAN FRANCISCO -- Bill Means, founder of the International Indian Treaty Council, describes the 30 year effort at the United Nations which culminated in the Declaration on the Rights of Indigenous Peoples. Means was speaking during the AIM West gathering here in November of 2013.

Means compared the pace of the progress with the passage of the Declaration with that of the turtle, slowed by translations into world languages, and compromises. But today, the Declaration on the Rights of Indigenous Peoples is the foremost document.

Still, he adds, "It is a stepping stone."

“We never tried to make an eagle out of an crow.”

“The socialists are not much different than the capitalists. They all want land and resources,” he said, and for many there’s a third element. “They want cheap labor.”

"We provide a vision for the United Nations. We brought a gift to them."

Means also points out the role of Eleanor Roosevelt in the establishment of the standard of global human rights. Roosevelt's husband, President Roosevelt, did not support her effort. "Her husband was against her," Means said. 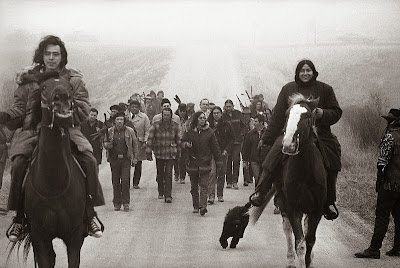