Censored Native poet, filmmaker and resisters, and a note from Noam Chomsky

While searching for my articles of travels with the Zapatistas, I stumbled across one of my most censored articles written in December of 2001. At the time, I had shared the article with Noam Chomsky, and had since forgotten about the note he sent back. Noam Chomsky wrote, “Interesting and eloquent. Thanks for sending."
I'm sharing this again, because of the eloquence and power of the words of each person interviewed.
Simon Ortiz is now an Arizona State University Regents' Professor. Arlene Bowman continues as a Dine' filmmaker living in Vancouver BC. John Benally's brother Leonard Benally, Dine', and his wife, Arlene Hamilton, both instrumental in the Peabody Coal protest at Lehman Brothers in New York, have both passed to the Spirit World. The struggle continues.


TUCSON, Ariz. -- Native American poets, filmmakers and spiritual leaders say America is being deceived by the national media about the intent behind the bombing of Afghanistan.
It reflects the deception and murder of the voiceless that Indigenous peoples have long known.
Simon Ortiz, Acoma Pueblo N.M. poet and professor in Canada, said images of the bombing of Afghanistan are the nightmares Indigenous peoples have always lived with.
Ortiz said it is now carried out in the conquest for oil.
"When I've seen the few photos of the destruction and killings caused by U.S. bombs in Afghanistan, I immediately think of what Acoma and the other Pueblos would look like if the same hellish madness were ever visited upon them," Ortiz said.
"People standing amidst the ruins and rubble of their adobe and stone homes. Children and old men and women stunned, weeping quietly. It is horrible to envision.
"This is victory over the enemy?
"And then I think of January 1599 when Acoma was laid to waste and hundreds of Acomas died at the hands of Spanish conquistadors under Don Juan de Onate. "That was victory over the enemy?
"No, that was an obscenity of death and conquest committed so that Native land and its resources could be gained, just like what is taking place now in Afghanistan and the Mideast -- obscenity of death and conquest committed  so that control over oil resources can be gained."
Ortiz, internationally-known author of "Woven Stone," and dozens of other books of poetry and essays, like Navajo filmmaker Arlene Bowman, relocated to Canada because of professional opportunities for Indigenous peoples.


Bowman, independent filmmaker living in Vancouver, British Columbia, said the war on Afghanistan is an energy war and at home, President Bush is rapidly undoing the preservation of sacred lands put in place by the Clinton administration.
"I observe mostly the drive by the federal government to get to the energy sources in Canada and the United States fast!"
"Bush is definitely a redneck of a president."
Bowman, producer of "Navajo Talking Picture," shown in international film festivals and "Song Journey," shown on PBS, was born in Fort Defiance and grew up in Phoenix. She is concerned for Navajos at home and elsewhere.
"Probably Bush doesn't care about Aboriginal peoples and is racist. What else is new?
"He doesn't care if the Dineh people will not get enough water on their land and if digging for uranium will affect Dineh people, leaving them with cancer and radiation.
"It's not his brain and body or children. Has anything really change for us?"
Bowman said Bush has become an opportunist by way of the tragedies of others, "ramming through" his energy policy while the mainstream media has acted with complicity in a crime against humanity.
"The opposition  voice is censored out literally. The United States is becoming a 'banana republic,' a police state."
Bowman said racism towards people of color has not diminished, but major networks refuse to cover America as it is.
"Just observe the major television news networks. It's all 'Rah! Rah!' for the flag and gun-ho flag waving.
"The censorship bothers me a lot. Big Brother is watching and it's real." 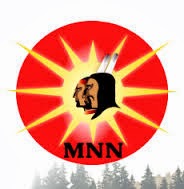 MNN. Jan. 5, 2014. The orenda [energy], oyendera [body] and onikonra [the mind] all work together to be healthy and to communicate with the natural world. We are spirit beings with inherent vibrations. Taking us off natural sound and natural time creates divisions in our mind so that we can be separated from the oneness.

Pope Disney to corporatists: “You take over time and I’ll take over music and sound”.

The human cell is an electric magnetic field of possibility. Old indigenous languages are in touch with true consciousness. By design English does not generate those patterns.
Physical healing can be aided or hindered by tone. Frequencies are deliberately altered to weaken the spiritual impact. Singing gets into deeper levels of the subconscious, accessing insights beyond artificial belief systems. Out-of-tune languages such as English vibrate at different frequencies. Many of us were beaten when we spoke our own language and forced into the English vibration.
Pythagoras, a Greek mathematician, invented the 12-note chromatic scale that all Western music is based on today. The original sounds of nature that Creation communicates with are hidden between the artificial man-made chromatic scale to further disconnect us from nature. Some call the original scale “solfaggio”.

Mohawk do the small condolence to connect with creation. We take the soft leather and wipe our yes, the eagle feather to clean our ears and drink the clearest water. The frequencies of our songs also connect us. The native drums connect us directly to Mother Earth.
The sounds are there but we are not hearing it. They have been deliberately turned down and masked. “Owistah” prevents us from becoming of one mind. When we boost the volume on the natural frequencies, we will hear the vibrations and the consciousness of the universe. An old paradigm will emerge to heal all the separation that’s been artificially created.
Memory is experience and intelligence stored in the cells of our mind and body, called DNA. With the right stimuli, sounds and frequencies, information is released from the true self.
Music is for the secret ear. Changing the notes causes the matrix of thought and well-being to be squelched. Frequencies can turn grief into joy, cause people to connect to their inner source. These channels have to be kept open so the life force can flow.
The Western music limited 12-tone equal temperament scale limits vibration. It creates boxed-in thinking, stuffed and suppressed emotions, anger and fear-based consciousness and war.
Mother Earth is changing her frequencies. So will every living thing.

At the deepest level we are together as a body, spirit and soul. Indigenous worldwide can lead us all back to healing ourselves in our own minds. When 5 of the Iroquois Nations figured this out in our own minds, our teacher, Dekanawida, left. He asked us to help the rest of the people in the world to figure out this simple formula in their own minds. He said, “te-ia-ta-te-wen-nio”, that each one of us is sovereign.
Another great prophet, Jimi Hendrix, was the only musician to tune into the earth frequencies. His song, “Third Stone from the Sun”, [our Mother] is all about frequency and vibration. He said, “When the power of love overcomes the love of power, the world will know peace”. Jimi Hendrix. “Third Stone from the Sun”.
Keshe. Timetable for taking our planet back”.
MNN Mohawk Nation News kahentinetha2@yahoo.com For more news, books, workshops, to donate and sign up for MNN newsletters, go towww.mohawknationnews.com  More stories at MNN Archives.  Address:  Box 991, Kahnawake [Quebec, Canada] J0L 1B0

We Rode with the Zapatistas

The impenetrable stronghold of the Zapatistas

When people speak of Che, they often speak of his deep love, love for humanity, love for Indigenous People, and love of justice.

Those of us who traveled with, rode with, and supported the Zapatistas over the past 20 years, were drawn together because of this same manner of love, this love of humanity, and wanting to build a better world and expose the injustices.

Those of us who live in Arizona and Sonora, Mexico, and along the US Mexico border, felt a special measure of this love. We rode with the Zapatistas on the caravan through Mexico, made the long journey to the Chiapas jungle strongholds, and were honored and gifted with two visits from Marcos and the Commandantes in Sonora, just south of the Arizona border.


We were, and are, Tohono O’odham, Yaqui, Mayo, Dakota, Hopi, Navajo, and yes gringos and so much more. We were joined by Mohawks from the north, Seri and Cocopah from the west, and the fierce Indigenous from Guerrero in Mexico, who spoke Nahautl.

Among those from Guerrero was one that will be forever imprinted in my mind as a symbol of this struggle. He was a lean young man in his early 20s. He had only one leg, and hopped from place to place on one leg, with a stick to balance. When he was asked in Michoacan why he was here on the Zapatista caravan, he said, “We have no food at home.” When the call for security came, he was the first to volunteer.


I think of him now, and the young Mayan mother who lived up the footpath in the mountains of Chiapas, grinding the corn from her cornfields for her young children, never knowing how long they could survive, how long before the lands would be seized by the military and corporations.

At night in the jungle highlands we hung a flashlight from the roof of the hut for light. There was a warm glow, and someone had walked to town to bring us visitors a cold sweet drink, a gesture of that deep, boundless and borderless love. The year was 1995.

Rising from the shadows, Zapatistas in northern Mexico
By Brenda Norrell
UN Observer and International Report 2006
MAGDALENA, SONORA, Mexico – Subcomandante Marcos urged Indigenous in the United States and Mexico to rise up as warriors from the shadows and defend their lands and people from the corporate and political greed that is advancing as a death march.
“We were already dead and we were called upon to become warriors, according to our legend,” Marcos told O’odham and others gathered here during the Other Campaign’s tour of Indian country in northern Mexico on Oct. 21.
Speaking in poetic verse in the border region, Marcos told how the Zapatistas emerged in Chiapas, dying to live again.
“We were dead, we became what we are: shadows. And in a strict sense we are that: ‘shadow’s warriors or warriors of the shadows.’

Zapatistas fed up with media terrorism


Democracy Now!
Chiapas Professor Peter Rosset: Well, I think we face in Mexico and in the world—in the United States, as well, and in many countries—what Subcomandante Marcos has called "media terrorism," and that the mainstream media, what it does is it frightens people with unexplained images of threats and violence, making people support right-wing governments and repressive measures, and never really reports on what’s going on in the grassroots on what are the real causes of problems, what are real solutions, what do local alternatives look like when they’re actually functioning. We never hear anything like that. And I think the Zapatistas, amongst many other social movements, are fed up with that.
http://www.democracynow.org/2014/1/3/zapatista_uprising_20_years_later_how