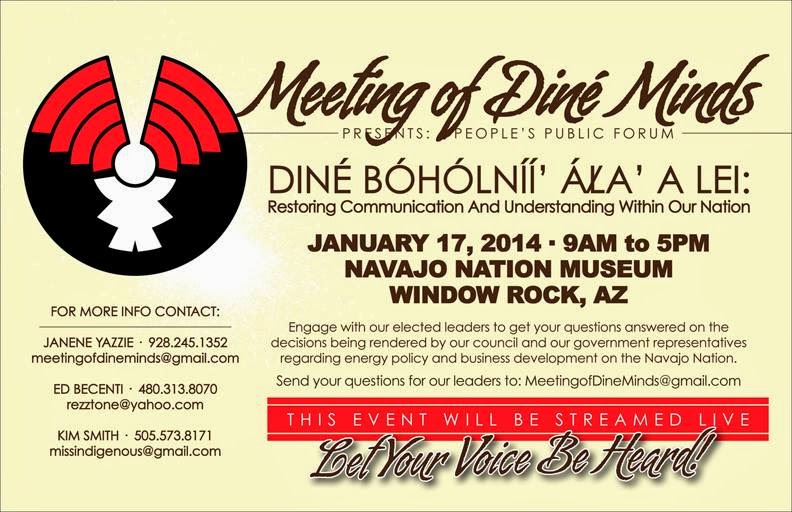 When: January 17th, 2014 (9:00 AM- 5:00 PM)
Where: Navajo Nation Museum
Why:  To provide the public an opportunity to get their questions answered on the decisions being rendered by our council and our government representatives regarding energy policy and business development on the Navajo Nation.
PLEASE LET YOUR VOICE BE HEARD! We are soliciting YOUR questions for our leaders on these very important issues. Email your questions to meetingofdineminds@gmail.com or look for our Facebook page: https://www.facebook.com/dineboholniialaalei?ref=hl
***This event will be streamed live***
FOR MORE INFORMATION CONTACT:
Janene Yazzie
928-245-1352
meetingofdineminds@gmail.com

Meeting of Dine Minds Press Release
January 07, 2014
RSVP FOR THE NEXT MEETING OF DINE MINDS AT
MeetingofDineMinds@gmail.com

ATTENTION: The next Meeting of Dine Minds is scheduled for January 11th, 2014 at Tuba City First Presbyterian Church Education Center. We will be discussing election strategies for both President/Vice-President election as well as regional (delegate) elections. We will also take time to join our meeting via SKYPE with representatives at the Shiprock N8tv Youth Rising Event. In the afternoon we will be continuing the discussion of developing a Peace Treaty with our Hopi brothers and sisters. There will be lots of information being shared on the latest Navajo Nation developments including an update on the upcoming Diné Bóhólníí’ áła a lei: Restoring Communication and Understanding within our Nation Forum taking place on January 17th at the Navajo Nation Museum. Please come and let your voice be heard, we are open to all people, young and old, Diné and English speakers.  For a copy of the last meeting minutes please email us at the address provided.
This meeting location was reserved through the generous sponsorship of the Forgotten People and everyone is asked to please bring a dish as this will be a potluck event.
FOR MORE INFORMATION CONTACT: 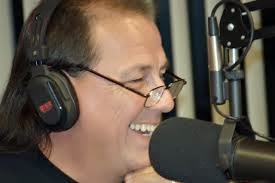