Lens on the Land: Defending sacred land from Rosemont copper mine 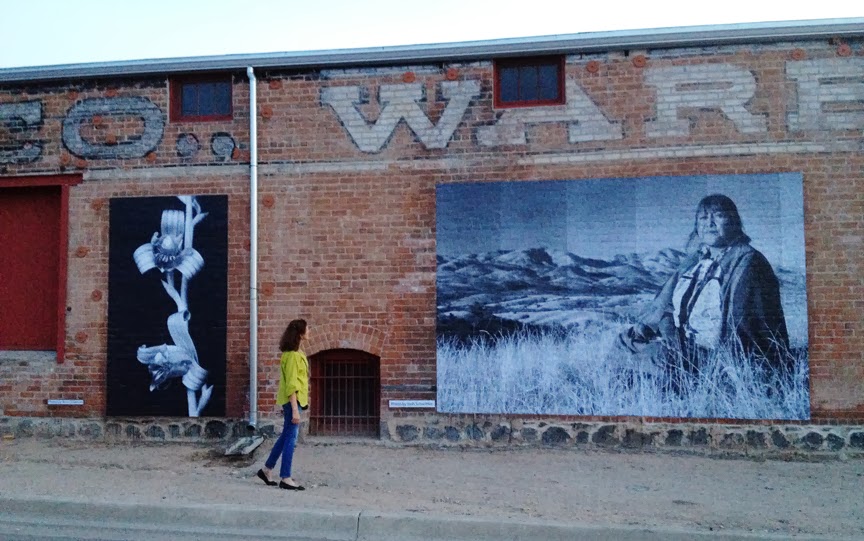 Photos above by Josh Schachter


Lens on the Land, Rosemont: What's at Stake?
Censored News

Special thanks to Tucson photographers Josh Schachter and John Sartin for this monumental effort to save the sacred wild, and sharing their photos with Censored News!


Volunteer photographers, Save the Scenic Santa Ritas, Sky Island Alliance, the Sonoran Institute, and other key partners in Southern Arizona have joined forces to shed light on what is at stake with the proposed Rosemont Mine through a series of photographic exhibitions and outreach efforts. Rosemont Mine would be located in the northeastern part of the Santa Rita Mountains, and if approved, would severely compromise the natural and cultural heritage of Southern Arizona. The impacted area is one of the most biodiverse regions in the US – home to 9 threatened and endangered species, including the jaguar.
The photographs collected from professional photographers, biologists, community members, and many others will be used in traveling exhibitions, publications, presentations, websites, and any other way we can think of to educate and inspire the public, nonprofit organizations, businesses, and policymakers to take action to protect the Santa Rita Mountains and the surrounding region from the proposed mine. We hope you will join us in this effort!

The project was born in response to the construction of an open-pit copper mine, proposed by a Canadian mining company, that will impact some 14,000 acres of land in Southern Arizona, including critical habitat for nearly a dozen species federally recognized as threatened or endangered as well as precious riparian areas and groundwater resources. By “replacing” plants and animals with human beings in reverential and playful ways, the 20-minute video invites us to consider our role as both stewards and consumers of nature.

The Great Wheat Paste Project! Photos of the process by John Sartin and fellow photographers 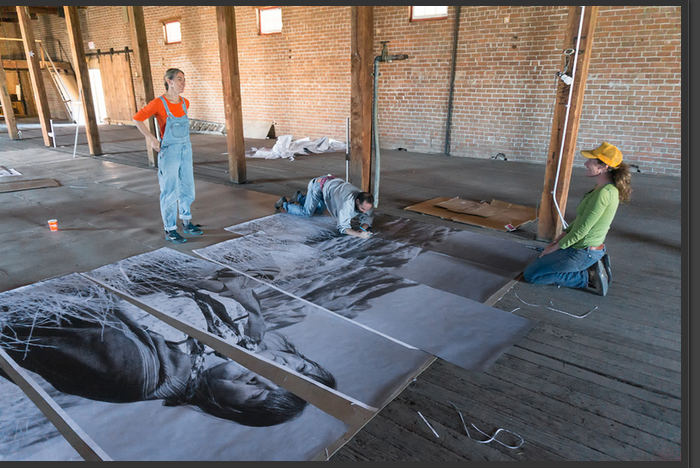 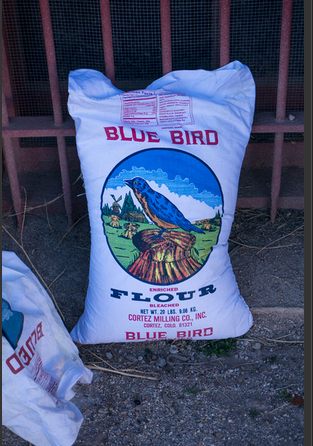 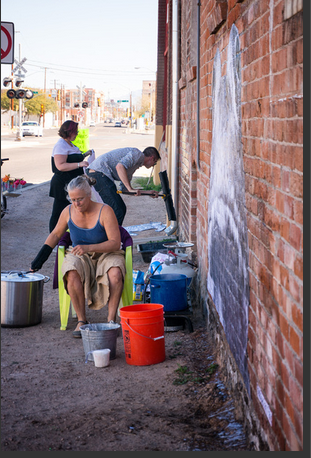 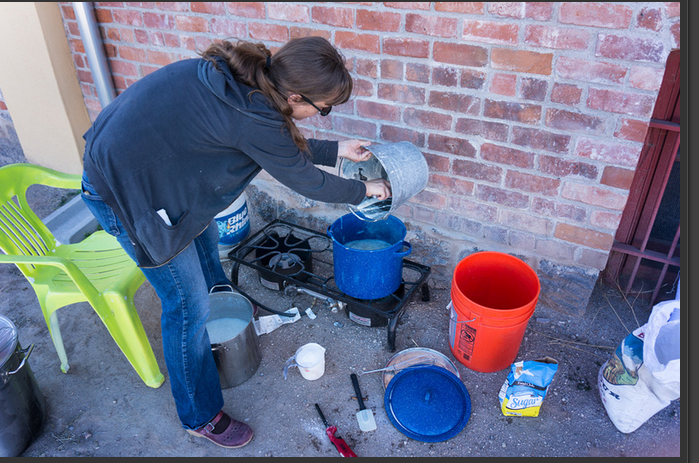 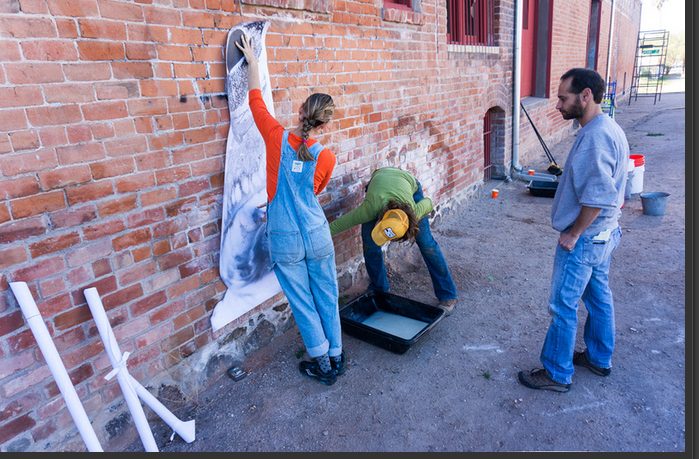 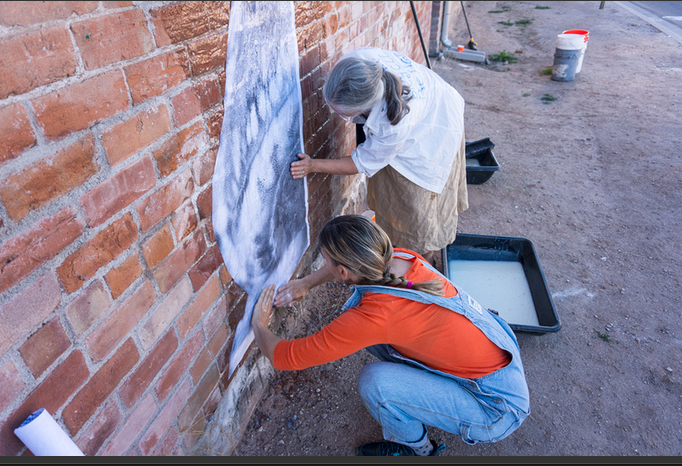 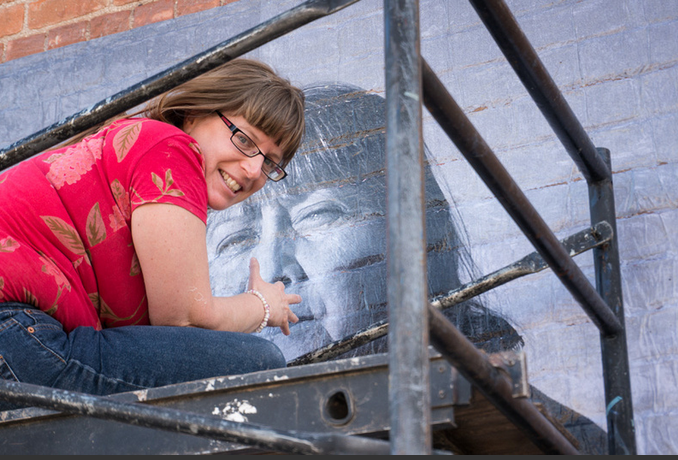 John Kane, Mohawk 'Remove the Dust for our Survival' 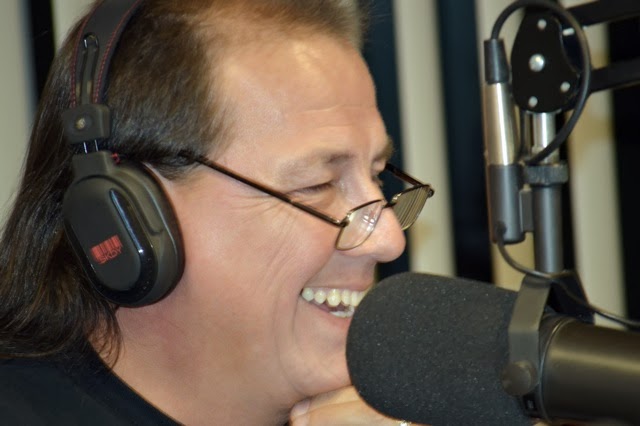 Remove the Dust for our Survival

I really like the expression, "Remove the Dust." Its most basic meaning evokes the image of sweeping away the dust accumulated over years of neglect from our wampum belts or any other reminders of our shelved knowledge. We use it as an expression that is generally associated with maintaining our culture. But at some point the line between the survival of our culture, distinction and autonomy and just plain survival will be brushed away like a line drawn in the very dust we seem covered in now.
Read more »
at February 25, 2014 No comments: 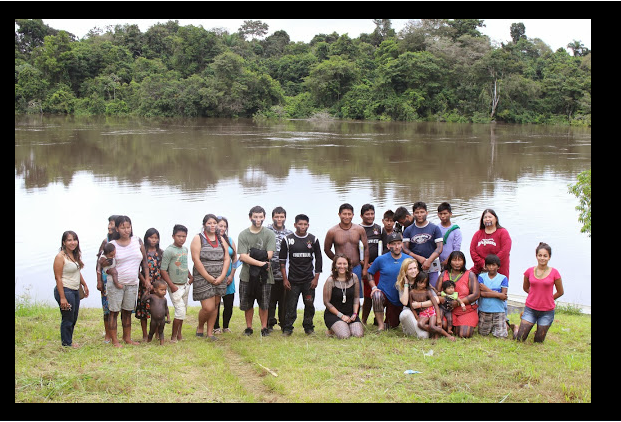 "Rivers like the Klamath and the Xingu are the bloodlines of every human on the planet." Indigenous youth unite for rivers February 23, 2014 | Team Klamazon 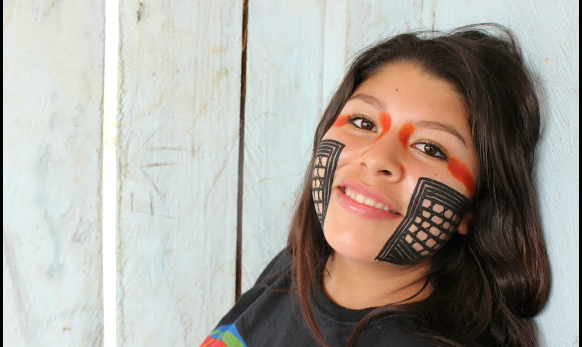 Brasilia, Brazil – After an amazing journey deep into the Amazon we arrived safely in Brasilia with a hopeful feeling of urgency in the struggle to preserve the Amazon and its people.
For our group – comprised mostly of indigenous North American youth – meeting our indigenous brothers and sisters, experiencing the Amazon's unique environment, and witnessing the destruction being caused by the Belo Monte Dam project is powerfully motivating,
We are people who call the Klamath River home. The Yurok, Hoopa, Karuk, and Klamath tribes are the protectors of the Klamath River landscape. The campaign to remove the dams on the Klamath has been a long fight, won through science, protest and defending the inherent rights of indigenous communities.

The US War on Peacemakers in Indian Country


"The U.S. military first murders your people and destroys your way of life while stealing your culture, then forces you to learn their evil ways of lying and cheating.” Louise Benally, Dine' of Big Mountain.

The US war on peacemakers is revealed in the details of spying on peace activists today by Democracy Now! The current details are no surprise to Native American and First Nation peace activists who are blacklisted and censored, which exposes the role of the US government and media in the promotion of the military and bogus wars.

Buffy Sainte Marie was censored, blacklisted and forced out of the music industry in the US. Louise Benally was censored by Indian Country Today when she compared the war in Iraq with the forced Longest Walk of Dine' to the prison camp of Fort Sumner.

During an interview that was censored by Indian Country for seven years, Cree singer Buffy Sainte Marie said it was her stance against the Vietnam War and her song, "Universal Soldier," that led to her being targeted by the US government and eventually forced out of the music industry in the US.

"I found out ten years later, in the 1980s, that Lyndon Johnson had been writing letters on White House stationary praising radio stations for suppressing my music," Buffy said backstage at Dine' College on Navajoland. 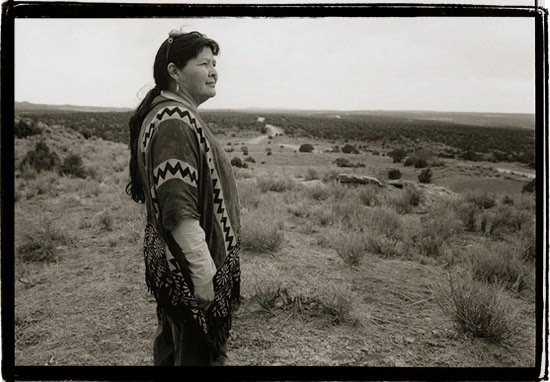 On the eve of the United States war on Iraq, Louise Benally, Dine' of Big Mountain, made powerful statements about this war, comments that were censored by Indian Country Today. Even under pressure, Indian Country Today refused to publish these comments.

Louise remembered her great-grandfather and other Navajos driven from their beloved homeland by the U.S. Army on foot for hundreds of miles while witnessing the murder, rape and starvation of their family and friends.

“I think these poor children had gone through so much, but, yet they had the will to go on and live their lives. If it weren’t for that, we wouldn’t be here today.

“It makes me feel very sad and I apply this to the situation in Iraq. I wonder how the Native Americans in the combat zone feel about killing innocent lives.”

“The U.S. military first murders your people and destroys your way of life while stealing your culture, then forces you to learn their evil ways of lying and cheating,” Louise said.

After being repeatedly censored by Indian Country Today, then terminated in 2006, I published the two interviews with Buffy Sainte Marie and Louise Benally in full while creating Censored News in 2006.

During the years that followed, Indian Country Today's lead advertisement on the ICT website, for months at a time, was an advertisement for CIA spies, the CIA National Clandestine Service.

The war on peacemakers continues in Indian country, with the foundation set in boarding schools to condition American Indians to fight, and die, for the same US military which once imprisoned their ancestors, and today continues to carry out genocide in the US, and around the world, against Indigenous Peoples.

The US government, with its war based economy, continues to target peacemakers.

How Covert Agents Infiltrate the Internet to Manipulate, Deceive, and Destroy Reputations by Glenn Greenwald, The Intercept: https://firstlook.org/theintercept/2014/02/24/jtrig-manipulation/


More details have come to light showing how the U.S. military infiltrated and spied on a community of antiwar activists in the state of Washington. Democracy Now! first broke this story in 2009 when it was revealed that an active member of Students for a Democratic Society and Port Militarization Resistance was actually an informant for the U.S. military. The man everyone knew as "John Jacob" was in fact John Towery, a member of the Force Protection Service at Fort Lewis. He also spied on the Industrial Workers of the World and Iraq Veterans Against the War. A newly made public email written by Towery reveals the Army informant was building a multi-agency spying apparatus. The email was sent from Towery using his military account to theFBI, as well as the police departments in Los Angeles, Portland, Eugene, Everett and Spokane. He wrote, "I thought it would be a good idea to develop a leftist/anarchist mini-group for intel sharing and distro." Meanwhile, evidence has also emerged that the Army informant attempted to entrap at least one peace activist, Glenn Crespo, by attempting to persuade him to purchase guns and learn to shoot. We speak to Crespo and his attorney Larry Hildes, who represents all the activists in the case. READ MORE:
http://www.democracynow.org/2014/2/25/exclusive_inside_the_army_spy_ring

A new documentary reveals how the Mississippi state government spied on civil rights activists in the 1950s and 1960s. A little-known state agency called the Mississippi Sovereignty Commission hired spies to infiltrate the civil rights movement and squash attempts to desegregate the state and register African Americans to vote. Some of the spies were themselves African-American. The Commission generated more than 160,000 pages of reports, many of which were shared with local police departments whose officers belonged to the Ku Klux Klan.
Read more and watch: http://www.democracynow.org/2014/2/25/spies_of_mississippi_new_film_on

Mohawk Nation News
MNN. Feb. 25, 2014. The US is the Black Serpent Dekanawida warned us about. It took over the White and Red Serpents, EU and NATO. They are busy fomenting war everywhere in the world, as they always have. See link:“From Wounded Knee to Libya”.