Censored News readers were asked to share their thoughts on the most crucial issues in Indian country. The responses: Water, tarsands, violence, trafficking, inherent rights and corruption.

Questions: What are the most important issues that the national media is failing to cover in Indian country? What issues is your local media failing to cover? What issues should be a priority for the upcoming United Nations Permanent Forum on Indigenous Issues in New York?

Hope MacDonald Lone Tree, Dine' from Tuba City: Nationally: The theft of water (rights) from tribes. Locally: the nefarious activities that surround the theft of our water 24/7... while we fight internally.

Andrew Ironshell, Lakota: They are not covering how much fresh water the Keystone XL pipeline would potentially use and not reporting how they would obtain that water, and if they would get to use the water for free?

Zoi Lightfoot The trafficking and murders of so many of our young women and children in both Canada and the USA.

Laura Fraser/Ciiakap Tla-o-qui-aht First Nations One of the biggest challenges over the past two years I have faced is the state ignoring individual asserting and exercising of all our rights. I think it should go to International Court when a state continues to deny human and inherent rights. I have made many attempts to exercise our rights yet state is still trying to push my people through modern treaty practice. It is frustrating that our rights are ignored by a signatory state. If you could bring this before UN that would be great.

WandaLou McInturff Exploitation of women and children, NAGPRA too loose, too many Un-recognized tribes who's people and bloodlines will die out if something is not done finalized by state / feds. The earth, the water, the air, our food both what we eat (GM0s) and how we eat it (obesity); refined education.

John Kane, Mohawk: The fact of the matter is that genocide continues against our people. Environmental issues are a big part of it. When Brian Cladoosby stands up as a "Native Leader" claiming that 10% of the US energy resources rest on our land and attempts to throw the doors open for even more rape of our lands and people all the while playing the good little "kept" Indian, it just continues to frustrate me."
You know, I like going after the mascot issue as much as the next guy, and I do. But the issue is racism; plain and simple. And mascots and team names are the shallow end of that racism. I do talk about it but I refuse to talk about it it without bringing it back to policies, and genocidal acts, not just from the past but today. There is a part of me that would love to see this as the last vestige of racism but it's not even close. The biggest problem with the mascot issue is that from high schools to the pros there exists a huge platform to advance racist behavior. Whether your "team" bears one of these names or images isn't the point. The opponents of those teams, whether it is the Philadelphia fan who brings and impaled "Indian Head" to "Redskins" games or the high schools who hang "Trail of Tears" banners when they play the "Indians", it teaches yet another generation that it's OK to treat us like we're dead.


Samuel Sohappy, Yakama: The state of Washington vs Steve Sohappy has not compensated Steve Sohappy yet, and the Boldt decision cannot compensate David Sohappy Sr mainly because he died. The two cases plus Sohappy vs Hodel, stated that the Government promised homes to the Indians, and the non-Indians are raping the huckleberry fields and mushrooms in the national forest.

James Zion, attorney: The Republican move to block criminal jurisdiction over non-Indians and the victimization of Indian women is a big one. State compliance with the Declaration (on the Rights of Indigenous Peoples.) One only need read the smarmy U.S. statements that prove non-compliance, such as its bid to be on the Human Rights Council and policy statements on participation, etc. Oh, and the failure of the U.S. to file its report to CERD under the anti-discrimination covenant. That's an Obama fault.

Sylvia Kadiegee Suhvie McEvers-Jackson: My son was severely stabbed seven times on the reservation and there was nothing on the news about it. He's Native American like me of course and the severity of the crime, that person may walk.

Dine Bikeyah: Navajo people's money from resources income accountability. Detail responsibility, does (Navajo President) Ben Shelly monitor his administration?
Fundamental laws as a law superseding all other laws in the case of Lester Begay.
Audits should be demanded of all federal programs.

S Maize Battles, Dine': I agree with Dine Bikeyah on covering what is going on with the current INDICTMENTS that Involve the Navajo Nation Council Speaker and Navajo Nation Council Delegates that have made it CLEAR, there is serious need for an Audit of ALL Tribal Monies. Not just NTUA but Everything from the Trust Accounts, the General Funds, to the use of the Tribal Jets and Vehicles, to profits from the gaming. All of it. And also whether or Not Ben Shelly has PAID back the money, he promised to pay back, Before he was elected. If he has, good for him, if not? Then why not? The Current INDICTMENTS bring  to question, so many other questions about how the Navajo Tribe is handing iit's money. From possible abuses, to the monies that have been returned to the Feds for not being used.

Robert McDonald, Blackfeet: The focus on corruption by native officials was a ploy used by conservative racist leaders in the Harper administration to take the heat off their own diabolical plan to negate treaty rights across Canada.
To fight amongst ourselves in the media does not help Native Sovereignty. Please put the focus back on the evil Prime minister Steven Harper and his conservative racist Canadian Parliament. They are not concerned with what happens to missing and exploited Indian women and children. They seem to condone the attacks. They are more concerned with exploiting the natural resources within Native Preserves.
Sovereign nations need to rise up from the ashes of abuse and address the crises thrust upon us by the invaders of our sacred homeland. We should continue the blockades of trains and truck routes to stop the fleecing of our natural resources and check every vehicle at every blockade for the many missing native women and children that Canada seems to have no interest in protecting.
We must protect ourselves in Canada. Perhaps we should occupy Parliament Headquarters if the blockades don't yield any meaningful results. Why can't natives take back a country that was taken from them.
If the Queen can declare it legal for her subjects to assert jurisdiction over the entire land base of our Northern Continental indigenous people then so can a Chief of any Sovereign Nation. The problem is not so much the Fracking or the pipeline as it is the leaders of the ethnocentric Canadian government who are promoting it all. They must be stopped or removed from the continent.

Renee Still Day: The pipeline, fracking disasters, anything environmental, but also the success stories of renewables. There are tribes I know that have wind farms and solar that are creating their own energy. I think people should know about those.

ITCA Sioux Falls: The unjust incarceration of Leonard Peltier. This should be talked about on a regular basis through the media.

Mato Woksape: Our 56 plus direct actions on behalf of the wolf. The fact that we ended the hunt for ten days. The media skipping us over has been detrimental to an entire species.

I believe it should be water, that said I would like people to remember the amount of water and other resources on and around lands with wolves on them. Many tribes are losing their water from mining, pipelines etc. Almost none of them tried to use protection of the wolf under the endangered species act to block these massive extraction projects. A lot of checkers players out there and I want people to know that its going to take some real chess players who can think many, many, many moves ahead to win this stuff. With 20 years of water left there is no time to be playing checkers.

Kathy Smith: My local media failed to cover a day of giving in a very poor part of our city. The inner city that in times reflects what life is like on the reservation. Oh by the way maybe it was because a church and a mosque were coexisting together on the same project.

Meanwhile, the national media fails to provide any serious coverage of the National Congress of American Indians, the US Senate Committee on Indian Affairs, or other national news impacting American Indians underway in DC.
When the tribal, state and US politicians get together in DC, it is like a bargain basement auction barn, with natural resources going to the lowest and most corrupt bidder in back door deals. Then, there are the deals on the golf courses, where another corrupt deal is just one swing away.
What you are likely reading in the news are public relations statements. These are likely spin, with possibly a phone call thrown in to disguise it, by an armchair journalist who never leaves their home, and who gets paid for the spin as if they were a news reporter.
It wasn't always this way, there was a time when both Indian country and mainstream media covered these issues seriously in the US capitol. Hopefully a new generation of Native journalists will take this on. But beware, DC is a very scary place. It is all smoke and mirrors. http://www.indian.senate.gov/ 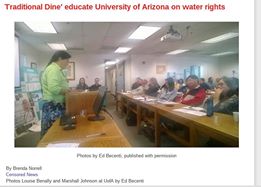 Did the Navajo Times provide coverage when Louise Benally, Marshall Johnson, Ed Becenti and the grassroots delegation went to the University of Arizona in Tucson to challenge Stanley Pollack speaking on water rights? And, how has Stanley Pollack as a non-Indian continued to hold his position as the Navajo Nation water rights attorney. The Navajo Preference in Employment law was enacted decades ago. Does that mean that there is not one Navajo, or Native American, water rights attorney in the world?
(Photo by Ed Becenti, published at Censored News)

I was surprised the Tucson Weekly, the local alternative paper, today didn't have coverage of the Tucson Peace Fair. In this photo, the Raging Grannies take on Obama for his broken promises. Photo Brenda Norrell/Censored News.

Here's another photo missing from this week's Tucson Weekly: Ofelia Rivas, O'odham, defending sacred land from Rosemont copper mining. The new wheat paste project of photos on a downtown building is from Lens on the Land: Rosemont, What is at Stake? Photo by Josh Schachter, published at Censored News. 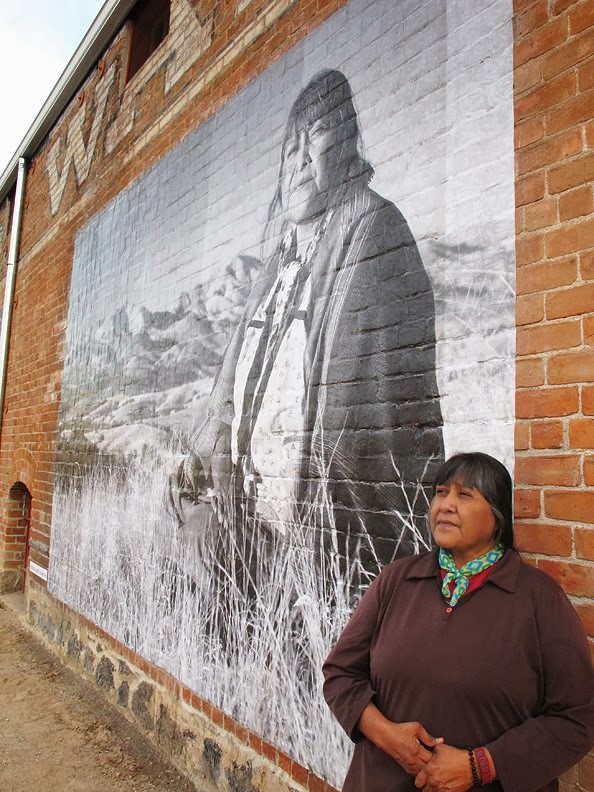 Mohawk Nation News  M.T. Keshe of Iran has released to the world a brand new techonology using natural gravity and magnetism to decontaminate everything on earth. With the same principles, energy can be created by everyone for free.KESHE: FUKUSHIMA CLEAN-UP.
Read more »
at February 26, 2014 No comments: