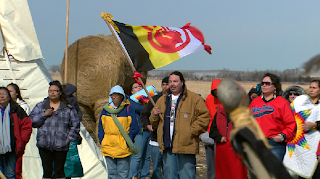 MNN. Apr. 3, 2014. Quebecois separatist candidate, Pierre Karl Peladeau, declares, “I want a country “.  He wants total power first as a cabinet minister, then as premier and then king of his dynasty. He is launching a hostile corporate takeover of Quebec Inc. Peladeau wants a country.

Mohawk Warriors: “Mr. Peladeau, we heard you want our country!”

He became a billionaire from stealing and selling our newsprint worldwide. Now he is a media baron. He’s ready to declare war on the sovereign Mohawk Nation on whose land he squats. He has to answer to the Mohawks about our unsurrendered land and resources. This is an international issue.
Pauline Marois promises when she is re-elected as Premier of Quebec Inc. she will make the Charter of Values even stronger. She can decide that everyone should shave their heads or eat poutine three times a day. Whatever!
Peladeau threatened to pass a law disqualifying himself from putting his Quebecor Inc. assets in trust. As Neo was told in the “Matrix’.

He punches his fist in the air and shouts in French.  They promise to rewrite history. Indigenous will be almost non-existent. Who are those bronze people whose skin color the Quebecois like to emulate in their tanning parlors? Where will their cheap cigarettes come from? Will Quebec, an Algonquin word, have to be renamed? Quebecois will pledge to speak only French until the day they die. They will be taught that they won the French and Indian wars! That they brought all the Indigenous land and resources with them from Europe!
The Nazis are trying to take over Quebec like they did in Ukraine. Only French will be spoken. What is going on in Quebec is the exact same m.o. in Ukraine, except with a Canadian flavor. Many separatists are already in major positions ready to run the show. Quebecois with help from outsiders are being organized to intimidate, attack and create conflict. Same old, divide and conquer.
Mr. Peladeau’s friends are ready to help because they think they can get the booty on the stolen Indigenous natural resources. They will not. We don’t deal in what if! They’re talking what ifs! They will never make more fake borders on our land. We Ongwehonwe will take our rightful seat at the table of nations. The rest of the world is waiting for this balance of the natural law to happen.

Pauline, be careful what you wish for!
As Led Zeppelin sang and Pauline better listen, “Always the same, playing your game, drive me insane, trouble is going to come to you. One of these days, and it won’t be long, you’ll look for me and I’ll be gone. Your time is gonna come. That’s all I gotta say to you, woman, your time is gonna come. “ Led Zepellin. “Your time is gonna come”.
MNN Mohawk Nation Newskahentinetha2@yahoo.com  For more news, books, workshops, to donate and sign up for MNN newsletters, go to www.mohawknationnews.com  More stories at MNN Archives.  Address:  Box 991, Kahnawake [Quebec, Canada] J0L thahoketoteh@hotmail.com for original Mohawk music visit thahoketoteh.ws
Dutch translation by NAIS
http://www.bloggen.be/natam/
at April 03, 2014 No comments: