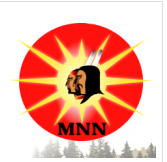 Mohawk Nation News
Please post and distribute.
MNN. May 10, 2014. The Corporation of Canada refuses to investigate the thousands of missing and murdered Indigenous girls and young women in Canada. Our girls have no political value to them and an investigation into their disappearance may uncover a connection to law enforcement involvement.

Nigerian girls happily on their way to school.

Same girls captured by Boko Haram! Photoshop takes over the world?
Canada is hastily sending to Nigeria a team of “avengers” to hunt down the kidnappers of 200 missing or murdered Nigerian school girls who have been captured by the Boko Haram guerillas. Harper said, in effect, “We don’t want any harm to happen to the girls who may be raped, put into slavery or prostitution”, like Aboriginal girls in Canada which he refuse to investigate. Why doesn’t he investigate the thousands of missing and murdered girls and women he’s been elected to do by his people?
Prime Minister Harper brought lying to a whole new level. He will fight such evil and barbarity. Canada, US and France are sending in advisors, surveillance, weaponry and thousands of troops to find these girls and to fight terrorism and Islamic militants in Nigeria. Nigeria is offering to trade them for releasing some Boka Haram.
The Boka Haram gang was established so that the West can go in and destabilize all of Africa, so they could have many wars to beef up their artificial economy. Nigerian leader, Good Luck Jonathan and his wife Precious are assets of the corporations registered through the Vatican. The military is trained, funded and armed with US weapons.
Historically, our Indigenous women have been targeted for elimination from the beginning of the genocide program. On October 25, 1924, the Indian Advancement Act created “Indian reservations” which are the prisoner of war camps for the Indians. The Residential Schools were to ensure they could accelerate the killing of our babies, the sterilization and elimination of our women and breakup of our clans. We were to be Christianized or killed!
The Truth & Reconciliation Commission set up by Prime Minister Harper to investigate the Residential School Holocaust concluded that the “crown” [Vatican] committed genocide under all legal descriptions. Laws against crimes of genocide.
It is time for the Crown Corporation called Canada to be tried for the crime of genocide against the Indigenous people in a non-Vatican controlled International Court of Arbitration. International Court of Arbitration.

Missing murdered: “Mr. Harper, we see you can’t walk in our moccasins”.
Sarah McLachlan’s new song tells it like it is: “Walk out. Walk in your own shoes. Lay down your footprints wherever you chose. Leave it all behind and move on. You are your own woman”. In Your Shoes.
Nigeria asks for help.
Canada helps Nigeria combat Boko Haram.
MNN Mohawk Nation News kahentinetha2@yahoo.com For more news, books, workshops, to donate and sign up for MNN newsletters, go towww.mohawknationnews.com  More stories at MNN Archives.  Address:  Box 991, Kahnawake [Quebec, Canada] J0L thahoketoteh@hotmail.comfor original Mohawk music visit thahoketoteh.ws
Military knew before attack. http://www.presstv.ir/detail/2014/05/09/361992/nigeria-ignored-kidnapping-warnings-ai/
at May 10, 2014 7 comments: