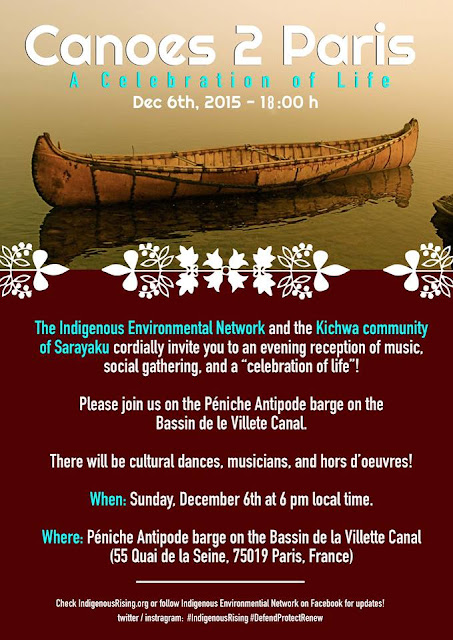 Indigenous Flotilla of Kayaks and Press Conference Demanding True Climate Solutions at COP21
By Indigenous Environmental Network
During the COP21 climate talks in Paris, Indigenous Peoples from the Arctic to the Amazon and their allies will gather to demand real climate solutions, including bottom-up initiatives originating in Indigenous knowledge, culture, and spirituality.
What: Sunday’s event will feature an all-indigenous flotilla of kayaks followed by a press conference featuring Indigenous leaders from the Americas offering solutions to stave off the worst of climate change and protect Mother Earth.
When: The flotilla action will start Sunday, December 6th at 2 pm local time, immediately followed by a press conference
Where: Péniche Antipode barge on the Bassin de la Villete Canal. 55 Quai de la Seine, 75019 (Closest metro station: Riquet on the 7 Line)
Who: The press conference will be led by Indigenous peoples organizations and movements including Indigenous Environmental Network; Idle No More, and the Kichwa community of Sarayaku from Ecuador.
Indigenous spokespeople speaking at the press conference:
Other spokespeople available for comment post-press conference:
Visuals:
Contacts
Dallas Goldtooth, Indigenous Environmental Network, France: +33 75 1413 823, US: (708) 515-6158, dallas@ienearth.org
Andrew Miller, Amazon Watch, (202) 423-4828, andrew@amazonwatch.org
Jonathon Berman, Sierra Club, (202) 495-3033, jonathon.berman@sierraclub.org
at December 05, 2015