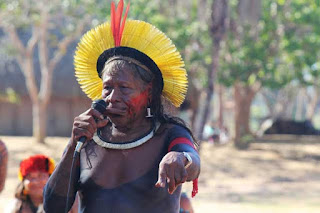 [Dec. 6, 2105] Indigenous peoples from the North and South Americas hosted a press conference outside the COP21 demanding that the Rights of Indigenous Peoples and the rights of Mother Earth be respected. As peoples most on the frontlines and most impacted by extractive industries and climate change, they brought their messages forward in solidarity.

Statement from Chief Raoni [translated]: "So we have a number of documents that we have prepared that describe the problems we are facing and how we are united in our struggle to defend land, to defend nature, and to defend life itself. What are we doing as indigenous peoples? We are protecting the very balance of Mother Earth. And we hope that you can understand that. We hope that you understand that when we protect the rivers, and we protect the waters; we are protecting what cools, and what soothes Mother Earth."
at December 06, 2015