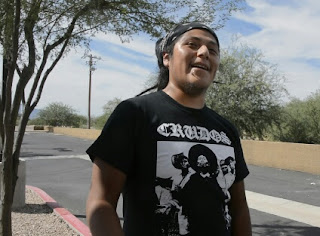 For several years, members of the Gila River Indian Community, particularly the Akimel O'odham Youth Collective, have opposed the projected extension of Loop 202 through their territory and through Moadak Do'ag, South Mountain, sacred for the O'odham. The project would destroy the South Mountain on the width of an 8 lanes wide freeway, and on places as high as a 2 storey building. Sacred land would be destroyed, as well as homes, some people would be forcibly displaced. Moreover, pollution – and the respiratory diseases it causes – would drastically increase; drugs and firearms would more easily enter the region and the Reservations. These are the issues Andrew Pedro, member of the Akimel O'odham Youth Collective, tells us about in this video, recorded on September 28th, 2015.

The proposed extension of loop 202 – a bypass freeway now going around east Phoenix – through the territory of the Gila River Indian Community, Akimel O'odham, is part of a much larger project: the creation of a trade corridor from the port of Guaymas in Mexico, to the region in Alberta, Canada, where the disastrous tar sands are extracted. The route also goes through Utah's tar sands. The corridor uses existing highways, but new ones are supposed to be built where existing roads are not suitable for heavy truck traffic. It implies among others the extension of loop 202 westward around Phoenix, and the building of a new highway between Phoenix and Las Vegas, as the existing road is not suitable for the expected traffic. The project also includes building 'inland ports' with 'Foreign Trade Zones' that would allow tax breaks and duty exemptions for companies.

NAFTA AND CANAMEX
The corridor project has been devised as infrastructure of the NAFTA, a free trade agreement devised in 1993, signed by Bill Clinton in 1994, between the United States, Canada and Mexico. The corridor called CANAMEX (which could also include railroads, inland ports and pipelines in the future) has been conceived at the time of the Agreement. In between, as resistance and protests arise, the supporters of the project claim that CANAMEX is meant to ease the problem of bottlenecks in the US west coast ports. However, the fact that Mexican dockworkers get lower wages, lesser benefits and less safety measures than union dockworkers in the US, is obviously a reason for companies to prefer Guaymas, which capacity must be doubled. Moreover, when NAFTA was adopted, its supporters claimed it would create jobs in the three countries. Of course, it is not true. Many US jobs have been outsourced to cheaper countries, factories opened on the Mexican side of the border, where immigrants who did not make it to the US and don't even have the money to go back where they came from, are employed for very low wages, paid only when they are needed.
NAFTA is supposed to be extended by TTP – TransPacific Partnership (until now, 12 countries have reached an agreement: Australia, Brunei, Canada, Chile, Japan, Malaysia, Mexico, New Zealand, Peru, Singapore, the United States and Vietnam) – and TAFTA, the Transatlantic Agreement with the European Union.
Apart from CANAMEX, Canada also wants to build pipelines for tar sands from Alberta to the West Coast, through Unist'ot'en land and Wet'suwet'en unceded territory, where Indigenous people are resisting. People are also resisting in Mexico, against La Parota Dam and privatization.

PRIVATE PUBLIC PARTNERSHIP
As federal, state and cities authorities don't have the money to finance the CANAMEX project, they want to get into Private-Public Partnerships, P3, which amount to privatization of the works and the lands needed: private companies bring the money, but public institutions have to pay it back and moreover guarantee profits to the investors. In the case of CANAMEX, it has even been contemplated to build toll roads. [This is what France has been doing with Vinci, selling out an irresponsible portion of French territory to that private transnational company].

THE BORDER
While TAFTA was supposed to throw borders wide open for trade, it should not apply to human beings. The Agreement was thus coupled to a hysterical policy towards immigrants, including militarization of the borders, building of a wall or fence along the Mexican border, introduction of visas (at an unaffordable price) for Natives whose lands and villages were crossed by the border since the 1848 Guadalupe Hidalgo Treaty – which divided the region between Mexico and the USA ; video cameras – not always directed towards Mexico –  as well as drones flying over Reservations, Border Patrol cops arresting or retaining people arbitrarily and recklessly driving on reservations' dirt roads, repeatedly killing pedestrians, etc. The creation of 'inland ports' with 'Foreign Trade Zones' would imply presence of Customs and Border agents, which would greatly increase the insecurity of immigrants far away from the borders.

THE 'SUN CORRIDOR'
Besides CANAMEX, loop 202 is also part of a project called the 'Sun Corridor', which is supposed to create a megapole from Phoenix to Tucson, maybe even from Prescott to Nogales. Phoenix already counts over 6 millions inhabitants; Tucson has streets spreading over dozens of miles. Those cities consume quantities of energy and water far above the capacity of that desert region. Rivers and underground waters – especially those on Native territories – are plundered and depleted. In the Gila River Indian Community, the Gila River is dry, just as the Salt River in the region and other sources of water. For many years, members of the Gila River Indian Community have been deprived of water and had to give up their traditional agriculture; as a result, the rate of obesity and diabetes is exceptionally high (as traditional food has been replaced by supermarkets). In between, the community gets a lot of water from the authorities, but it's too late to revive traditional agriculture and water is possibly used for trade. Pollution caused by traffic already brought pulmonary diseases, which will undoubtedly increase drastically if Loop 202 is extended through the reservation territory. And, again, Native Sacred Sites will be destroyed.

French article with video, map and some photos:
http://www.chrisp.lautre.net/wpblog/?p=3119

To exist is to resist-Carp.