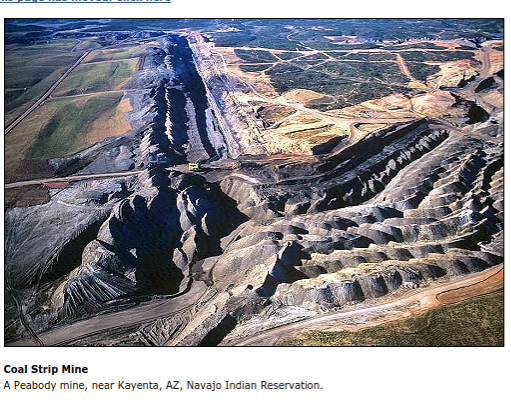 NAVAJO NATION, Ariz. -- The nation's largest coal company, Peabody Energy Corporation, filed for Chapter 11 bankruptcy protection Wednesday's the coal industry grapples with the fallout of low natural gas prices and the increased enforcement of federal regulations. Peabody has ownership stakes in 26 mines in Australia and the U.S. including the Kayenta Mine located in the Black Mesa region of the Navajo Nation. This declaration of bankruptcy has many Navajo communities asking what this means in terms of Peabody's responsibility to workers, health care and the clean up the region’s land and water, and transition its economy.

It’s telling to witness the various Navajo responses to Peabody’s bankruptcy filing,” said Jihan Gearon, Executive Director of the Navajo non-profit Black Mesa Water Coalition (BMWC). “Some people are celebrating it as an indicator of the potential shutdown of the Kayenta Mine and an end to the coal complex’s contamination of the environment and people’s health. Others are worried about the potential loss of jobs and impact to the Navajo Nation’s economy. Yet everyone is calling for a commitment from Peabody and government leaders to meet its obligation to clean up and to support a just transition to a new economy.”

“None of us should be surprised that Peabody filed for bankruptcy,” says Enei Begaye, BMWC founder and board member. “The decline of coal has been forecasted for decades, which is why BMWC began focusing on economic just transition efforts over 15 years ago. I’m not worried about Peabody’s executives, if we learned anything from the 2008 bank bailouts it’s that the company and their executives usually walk away from a crash unscathed.  But will the Navajo people and our fledgling economy ever get a bailout of this economic coal pit?”

BMWC in partnership with several other organizations has worked for years to further a fair and equitable just transition for Black Mesa communities and the Navajo Nation.

“Everyday Navajo community members are working to make the shift to a clean economy, I have been working with many tribal solar advocates for years and the Navajo solar future is brighter than ever. But it has been difficult to fully embrace the solar future because our tribal government has been tied to a sinking coal market,” says Wahleah, who is also a Navajo Nation Green Economy Commissioner. “I believe solar investments are one big way we will be able to take care of our homeland while taking care of our people.”

“Peabody’s bankruptcy demonstrates the mountain of instability and short-term thinking associated with speculative markets”, states Roberto Nutlouis, BMWC’s Restorative Economy Program Coordinator. “As Navajo people, our culture tells us that our traditional economy and the intricate environmental and social systems they uphold is what will really last.”

“Peabody’s bankruptcy shows us that transition for the Navajo Nation has already begun,” continues Jihan. “It’s up to us as Navajo people to determine how that transition will happen and what it will create. The Navajo Nation must take decisive steps away from this unstable fossil fuel economy and implement a just transition plan towards a sustainable economy now more than ever.”

Hear more from our partners and allies at: http://www.ourpowercampaign.org/press-release-peabody-just-transition/

AND ONCE AGAIN!THE COMPANY INVOLVED AND OUR WONDERFUL GOVERNMENT HAVE NO PLANS FOR THE CLEAN UP! I DON'T THINK THEY UNDERSTAND THE WATER SUPPLY HERE IN ARIZONA IS CRUCIAL! IT FLOWS TO THE REST OF AZ PEOPLE AND WHAT EVER IS GOING TO HAPPEN TO THE NAVAJO NATION WILL EVENTUALLY HAPPEN TO THE REST OF THE AZ PEOPLE! SO PEABODY AND THE Y.S.A GOVERNMENT PLEASE TAKE THIS VERY SERIOUSLY AND CLEAN UP THE MESS ! THANK YOU