Most Censored in Indian Country April 2016

O'odham battle the US Border Patrol, militarization and encroachment

Censored News through the years

The news in Indian country remains censored and distorted, as reporters stay home and plagiarize, and fail to show up to cover news stories. Censored are issues that conflict with the agenda of media owners and the US government.

Censored News has original content that those gagged by their dependence on advertising dollars, politicians and media owners, do not want you to know.

Here's some of our original articles that have been censored, or the facts distorted, in mainstream news in Indian country.

We begin with this breaking news from Eagle Pass, Texas:
. 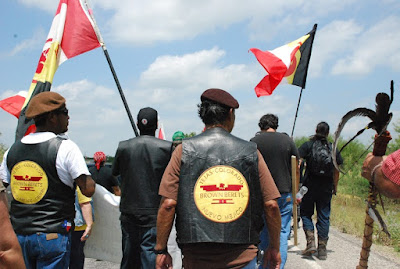 
"Native American Groups gathered for a historic rally and march to protest the open-pit coal strip mine in Eagle Pass, Tex. The protesters called on the U.S. Army Corps of Engineers  to rescind the mine’s permit, halt expansion and protect the land from further destruction.The project, owned by Dos Republicas Coal Partnership, mines lignite coal, which is transported by train from Maverick County across the border to be burned in a Mexican coal-fired power plant. The mine began operating several months ago, despite widespread local public opposition, and is harming the ancestral homelands of many Native groups and damaging sacred lands and more than 100 archaeological sites." http://bsnorrell.blogspot.com/2016/04/eagle-pass-native-groups-lead-action.html

In breaking news, the new Goldman Environmental Prizes reveal Newmont mining in Colorado beating unconscious an Indigenous grandmother protecting her land in Peru from gold and copper mining.
This is the same Newmont mining protested by Western Shoshone for mining and desecrating their sacred land.
Earlier, Wikileaks exposed the formation of a five country coalition to push mining in Peru, at the same time Indigenous were being beaten and killed defending their land from mining.
The US Ambassador reported directly to US Sec. of State Hillary Clinton, according to leaked cables.
Hillary's Ambassador and the Canadian Ambassador met with Newmont and other mining companies to orchestrate mining as Indigenous were dying.
More at Censored News:
http://bsnorrell.blogspot.com/2011/02/wikileaks-peru-us-feared-return-of.html

O'odham in Mexico cut border fence on traditional route. Thank you to Ofelia Rivas, O'odham, for these authentic photos which reveal the cutting of this fence at The Gate, south of Sells, Arizona, which is a traditional crossing of O'odham. Don't be fooled by others who try and take credit for this action, or articles written by other reporters who were not present and have distorted the facts.
Here is the authentic news at Censored News:
O'odham Cut Border Fence Restricing Traditional Route:
http://bsnorrell.blogspot.com/2016/03/oodham-cut-border-fence-restricting.html

Widely censored when it happened, Censored News republishes this courageous act of the Navajo, Hopi and Lakota delegation that took on Peabody Coal and challenged its stockholders in New York in 2001. Most of the delegation are now in the Spirit World.
Peabody Coal has now declared bankruptcy in April 2016, but who will do the cleanup and pay for the damages?
A Censored News exclusive:
Tribute to Navajo, Hopi and Lakota who Took on Peabody Coal
http://www.bsnorrell.blogspot.com/2016/04/tribute-navajo-hopi-and-lakota-took-on.html

While Peabody Coal was declaring bankruptcy in April, a fresh assault was made on Dine' (Navajos) at Big Mountain who have resisted relocation for 40 years. These Dine' resisters have endured harsh lives and were just subjected to another attack by the US, the BIA and its forces, the seizure of their cattle.
Louise Benally: Big Mountain Terrorized as Peabody Coal goes Bankrupt
http://bsnorrell.blogspot.com/2016/04/louise-benally-big-mountain-terrorized.html
Peabody Coal's 40-Year Holocaust of Navajos
http://bsnorrell.blogspot.com/2016/04/peabody-coals-40-year-holocaust-for.html

Please scroll through Censored News' 10 years of archives, revealing what the other media doesn't want you to know. From the protection of Oak Flat by San Carlos Apaches, to the resistance and building of communities in Chiapas, to the exposure of the crimes of the US government, Censored News continues.


Censored News is now in its 10th year, published with no advertising, adwords, grants or revenues.