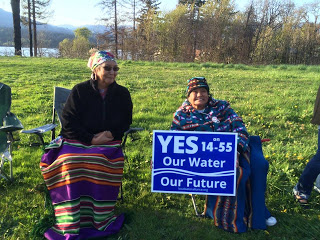 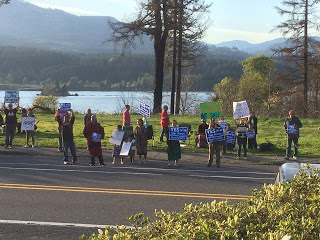 CASCADE LOCKS, Oregon -- On Monday April 11 a meeting took place at the Cascade Locks Town Hall and members of the Confederated Tribes of Warm Springs of Oregon arrived on short notice in traditional longhouse dress to fiercely defend the waters of our home, the Columbia River.

Ballot Measure 14-55 is an initiative to ban large-scale commercial water bottling operations in Hood River County. The measure, promoted by the Cascade Locks-based Local Water Alliance, will be voted on in the upcoming primary on May 17th 2016.

Many younger tribal members who still exercise their treaty rights to fish on the Columbia River spoke out in an eloquent, passionate and heartfelt opposition to Nestle's water bottling facility.

"Look at me and see I'm worried. You should be worried too. Nestle's going to come in here and destroy us. Don't let that happen", stated Whitney Jackson a tribal member of the Confederated Tribes of Warm Springs of Oregon.

"Oxbow Springs, Herman creek is the coldest tributary that goes into the Columbia River. The salmon really depend on that water to make their journey upstream. We know that water is becoming a scarce resource and we all depend on it. Our people do bring business here [to Cascade Locks]. Our people have been doing trade and commerce here on this river for over 10,000 years, since time immemorial", expressed Shayleen Macy, enrolled member of the Confederated Tribes of Warm Springs of Oregon.

Herman Creek, an important place for migrating fish populations, provides a cool water refuge and is a tributary to the Columbia River. The headwaters of Herman Creek, known as Oxbow Springs, is in the ceded treaty territory of the Confederated Tribes of Warm Springs of Oregon as outlined in the Mid-Columbia River Treaty of 1855.

In 2008 Nestle International Waters approached the city of Cascade Locks in hopes of purchasing the water rights to bottle and sell this pristine, priceless resource under their "Arrowhead" brand name.
Water rights to the spring are currently owned by Oregon Department of Fish and Wildlife (ODFW) for the operation of the Oxbow Springs Fish Hatchery which provides significant numbers to the local fisheries population and economy.

Last May, Austin Greene Jr. the current Chairman of the Confederated Tribes of Warm Springs of Oregon sent a letter to the newly appointed Governor Kate Brown requesting she prompt ODFW to withdraw the application for water transfer with the City of Cascade Locks.

According to an article published July 2015 in the Portland Mercury Greene's letter stated, "Water quantity and quality and hatchery operations are of paramount importance to ongoing treaty-based rights of the Tribe in the Columbia River area and to ongoing federal litigation," the letter reads. "These factors are not only reasonable to evaluate but of critical importance for ODFW's proposed water transfer, particularly in the context of climate change... and more frequent droughts and/or dry years."

Until recently Governor Brown maintained that the Nestle situation was a local issue. November 3rd 2015, OPB released an article announcing the Confederated Tribes of Umatilla's (CTUIR) support of Warm Springs' position regarding the water transfer in the Cascade Locks.

Chuck Sams, communications director for CTUIR stated, "We're concerned that it may affect water quality and water quantity as it relates to the fisheries resources," He said the tribes are worried the bottling plant could harm the salmon fishery. "And we don't see any process by which that's being addressed, nor are our treaty concerns being addressed."

Three days after Confederated Tribes of Umatilla came out in public support with Warm Springs, on November 6th, Governor Brown sent a letter to ODFW prompting them to withdraw the request in order to proceed with a process that ensures more public involvement.

In the November 6th article published by the Oregonian, Brown's spokeswoman, Kristen Grainger, said the governor's push to foster transparency in state government and her concerns about Oregon's ongoing drought spurred her to make the request.

"She thinks it's really important that proposals that affect a publicly held water right be subject to the review process that offers the greatest opportunity for public involvement," Grainger said.

According to the Oregonian article, the governor also sent a letter to the Oregon Water Resources Commission, asking its members to address the broader issue of how the state should consider requests to relinquish state-held water rights.

Chuck Sams released an additional statement in the Oregonian article along with Governor Brown stating, tribal leaders are concerned about the proposal's potential to affect tribal treaty fishing rights in the Columbia River. Water from the springs feeds Herman Creek, a critical cold water refuge for salmon when the Columbia River gets dangerously hot.

"Our concern is that there would be enough water still being sent down through to ensure the salmon are protected," Sams said. "We don't have that info yet."

According to a July article by Keith Ridler, state fisheries biologists in Oregon say more than 100 spring chinook died in early July 2015 in the Middle Fork of the John Day River when water temperatures hit the mid-70s.

Efforts by management teams to cool flows below 70 degrees by releasing cold water from selected reservoirs continued in an attempt to prevent similar fish kills among Chinook salmon and steelhead, which migrate later in the summer from the Pacific Ocean.

Fish become stressed at temperatures above 68 degrees and stop migrating at 74 degrees.

Much of the basin is at or over 70 degrees due to a combination that experts attribute to drought and record heat in June 2015.
"The tributaries are running hot," Graves said. "A lot of those are in the 76-degree range."

Orvie Danzuka Councilman for the Confederated Tribes of Warm Springs expressed his support for the resolution, "YES on 14-55 to honor 1855. The Treaty of 1855 guaranteed access to our usual and accustomed places, this [Herman Creek/Oxbow Springs] being one of them. Something like this could have a severe detrimental effect on our first food [salmon]. We want to be in line to make sure this doesn't happen."

Upcoming Event:
NO NESTLE in Oxbow Spring (k'uup waniitch) Appreciation Dinner and Giveaway with speakers and updates- Saturday April 23rd 2-5 pm at the Celilo Longhouse on the Columbia River.
"The Wanapum Fishing People against Nestle want to thank the Gorge groups and environmental organizations for protecting Oxbow Spring from Nestle for SEVEN YEARS before the tribes became aware and took a stand."

Please show your support for the Columbia River Treaty Tribes and citizens of the Gorge who are against the privatization of our sacred water by sharing this information.

With unprecedented fish kills and extreme drought conditions in our state this last year we cannot afford to allow grossly wealthy water bottlers to scheme their way into stealing our local water supplies for their private profits.
In the battle against water privatization, Tribal treaty rights may be a saving grace to protecting public water supplies.

It is every Tribal member's right to have a voice in the major decisions that directly impact our treaties, culture, home, environment and families. It is shameful that so many elected officials deliberately do not involve citizens solely out of selfishness and greed.

Kayla Godowa-Tufti is a member of the Confederated Tribes of Warm Springs of Oregon and a descendant of the Klamath, Modoc, Yahooskin peoples of the Upper Klamath Basin. An Indigenous rights/water advocate and freelance journalist residing in Kalapuya Territory, Oregon. 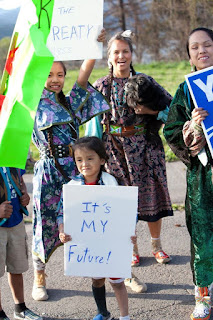 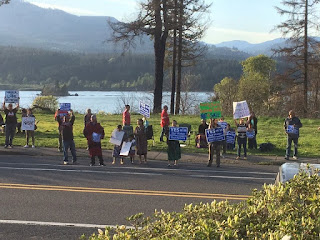 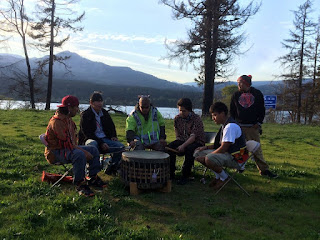 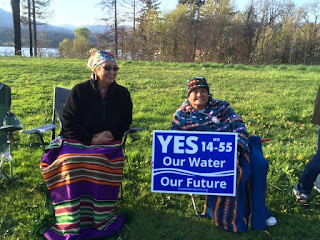 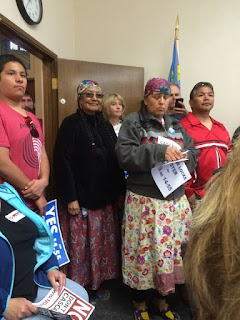