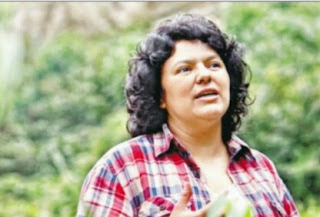 Berta Caceres was on the hit list of forces trained by the United States. The U.S. training of soldiers and assassins includes training by the US Border Patrol

Berta Caceres, the murdered environmental campaigner, appeared on a hitlist distributed to US-trained special forces units of the Honduran military months before her death, a former soldier has claimed, reports Nina Lakhani in The Guardian in Mexico City.

"Lists featuring the names and photographs of dozens of social and environmental activists were given to two elite units, with orders to eliminate each target, according to First Sergeant Rodrigo Cruz, 20.
Cruz’s unit commander, a 24-year-old lieutenant, deserted rather than comply with the order. Cruz – who asked to be identified by a pseudonym for fear of reprisal – followed suit, and fled to a neighbouring country. Several other members of the unit have disappeared and are feared dead. 'If I went home, they’d kill me. Ten of my former colleagues are missing. I’m 100% certain that Berta Cáceres was killed by the army,' Cruz told the Guardian.
Read the article in The Guardian: https://www.theguardian.com/world/2016/jun/21/berta-caceres-name-honduran-military-hitlist-former-soldier?CMP=share_btn_tw

The US Congress authorized over US$100 million in 2016 Central America's for military, counternarcotics, and border enforcement assistance -- over $30 million more requested, reports WOLA, advocating for human rights in the Americas.

Among the special operations in Honduras trained and funded by the United States is this one, which claims to be reducing the flowing of migrant children to the US.

According to the national police, the team is primarily funded by the U.S. State Department and was trained by a U.S. Border Patrol Tactical Unit, known as BORTAC. The team's aim in this operation is to stop the flow not just of unaccompanied minors, but of children who head north illegally with only one parent, reports LA Times. http://www.latimes.com/world/mexico-americas/la-fg-ff-honduras-border-20140709-story.html


WOLA reports on US funding and training in Honduras:

As a recent Wall Street Journal (WSJ) report noted, “Over the past two years, U.S. Special Forces have built the elite SWAT unit, called the Tigres, from scratch.” Colombian counterparts have also helped to stand up and train this unit. As explained in the article, during operations Honduran agents are the ones who “kick in doors” and carry out arrests, while U.S. Special Forces monitor operations from apartments or similar nearby locations. The forces “marked assault routes on a satellite view of the slum and scanned photos from a circling police helicopter. They read WhatsApp text messages between the SWAT commander and his men.” Green Berets train the Tigres at an isolated base in the mountains, but the United States does not provide the force with weapons: only uniforms, boots, radios, navigational tools, and training ammunition. All of this information came from the WSJ investigation.

In an August 2015 letter to Secretary of State John Kerry, 21 members of Congress expressed concern over the Honduran military’s involvement in public security and increasing U.S. military assistance to the country, specifically mentioning FUSINA. They wrote: “We are concerned about Honduran media reports that in mid-May of this year, a team of 300 U.S. military and civilian personnel, including Marines and the FBI, conducted ‘rapid response’ training with 500 FUSINA agents, using U.S. helicopters and planes, despite allegations regarding the agency’s repeated involvement in human-rights violations.” There is little other publicly available information about U.S. support for FUSINA.
Nearly all other public information about U.S. support for El Salvador’s and Honduras’s border security discusses initiatives funded through the State Department and overseen by State’s Bureau of International Narcotics and Law Enforcement Affairs (INL), as well as Customs and Border Protection (CBP) and Immigration and Customs Enforcement (ICE) in the Department of Homeland Security. Nearly all CBP and ICE assistance is funded by INL.
Some examples include:
The Defense Department and CBP also support some TCIU investigations. Between 2012 and 2014, DHS spent $2.4 million of its own funding supporting units in the Northern Triangle. In 2014, TCIUs, which until then had only been present in Guatemala, were expanded to El Salvador and Honduras. Because Congress provided additional funding for TCIUs in 2015, ICE expanded units in El Salvador, Guatemala, Honduras, the Dominican Republic, and Colombia, and reestablished an additional TCIU in Mexico.

Read more: List of US Forces -- including US Border Patrol -- conducting training of soldiers and assassins in Honduras and elsewhere in Central America:
http://www.wola.org/commentary/which_central_american_military_and_police_units_get_the_most_us_aid