Mohawk Nation News
Please post & distribute.
MNN. July 13, 2016. Canada is handing over harbors on onkwe’hon:weh land to foreign corporations they are setting up. They will retain our tax-free rights for the benefit of these foreigners. The corporations will fail and the bankers will grab the harbor facilities across Canada. The Chinese have already tried to buy kanion’ke:haka/Mohawk islands in the St. Lawrence River for distribution and manufacturing centers and to situate their population. This invasion was stopped by the Akwesasne onkwe’hon:weh.

Chinese maneuvers on rotino’shonni land?
Canada has outstanding land settlements to make to rotino’shonni, Iroquois, for territories known as “The Thousand Islands” and in particular the islands between Akwesasne and Kahnawake, plus the North Shore of the kaniatarawano’onweh, including the city of Cornwall. Canada is offering $240 million for us to purchase our land from white settlers, should they agree to sell our land to us! They want us to use the banker imposed money system to buy back the land they stole from us, just like the Seigneury, Kanekota and so on.
A secret agreement was signed to create a joint corporation between the city of Cornwall and the illegally imposed Mohawk Band Council of Akwesasne Inc. on April 15, 2016. They are both sub-corporations of the corporation of Canada. It violates the onkwe’hon:weh inherent original instructions that we cannot surrender or monetize lands belonging to the future generations.

This watershed is kaia’nere:kowa great law land.
The signers are: Abram Benedict and Heather Philips, in violation of kaia’nere:kowa and the many unhonored standing agreements, representing the Mohawk Band Council Inc. and Leslie O’Shaughnessy and Helen Finn for the City of Cornwall Inc. Canada was represented by former astronaut, Marc Garneau, the Minister of Transport. It involves large sections of waterfront lands, including the port facilities on the kaniatarawano’onweh [St. Lawence River]. The kanion’ke:haka [Mohawk] communities on kan’ien:keh were never informed nor consulted. The tekentiokwanhoxta is the circle of 49 families, and our friends and allies throughout great turtle island, who preside over all of our land. We must all be fully informed and consent on all matters concerning our land and waters.
Please read the attached treasonous agreement.  MCA- Cornwall July 2016
We were never defeated in a legal war. We never sold our land. US presidential candidate, Donald Trump, dislikes the onk’weh:honwe over the demise of his casino racket across the US. He threatens to sidestep the law by exercising eminent domain against INDIANS by expropriating our land for his purposes. He openly says, “The INDIANS are not sovereign”.

Trump visited the Kahnawake pow wow recently so that a medicine man could fixed his lifelong back problem, which he did. He then called down the Mohawk ironworkers in New York City yelling at them that, “You are nothing but a bunch of high paid laborers!”

The progenitors of the soil have the duty to take a stand.
All of our people on great turtle island have a covenant relationship going back thousands of years with all our people. We are now calling them to revive those covenants between us. Getting rid of the band councillors was put in the well 30 years ago! Time to pull out the issue and deal with it.
As Johnny Horton sings: “We looked down the river and we see’d the British come. There must have been a hundred of them beating on the drum. They stepped so nigh and they made their bugles ring. We stood behind our cotton bales and didn’t say a thing. We fired our guns and the British kept a’coming. There wasn’t near as many as there was a while ago. We fired once more and they began to running. On down the Mississippi to the Gulf of Mexico. Hut, hut, three, four, sound off, three, four, hut, hut!”.

ALERT: PayPal has transferred MNN’s funds [$150] to the US Federal Reserve without explanation. MNN Mohawk Nation News kahentinetha2@yahoo.com for more news, to donate and sign up for MNN newsletters, go to mohawknationnews.com More stories at MNN Archives. thahoketoteh@ntk.com Address: Box 991, Kahnawake [Quebec, Canada] J0L 1B0 or original Mohawk music visit https://soundcloud.com/thahoketoteh
Corpo Chiefs at it again.
http://libertyfight.com/2016/good-ole-boy-on-dallas-shooting.html
http://www.activistpost.com/2016/07/casting-call-for-extras-actors-during-cleveland-rnc-violence.html
http://rinf.com/alt-news/newswire/leftist-riot-in-berlin-over-120-policemen-injured-86-civilians-arrested/
http://patriotrising.com/2016/07/11/dallas-attack-likely-reverse-movement-toward-police-demilitarization/ so this is what it’s about
Training to kill.

Please post & distribute.
MNN. July 11, 2016. Nature’s rule in all living things is, “when a tree that is rooted in the ground and transferred from one place to another, the tree will no longer bear fruit as good as at its original place”. Killer pigs, killer bees, killer people! New unnatural tribes are being created on ono’ware:keh, great turtle island, taking a page from the “Secret History of the Indian Ring” [Thomas Henry Tibbles, 1923]. It’s an old tool designed by the European monarchs/bankers to kidnap, relocate, kill and use them to steal the lives and possessions of the original people naturally placed on their land by creation. Nature’s balance has been deliberately disrupted for profit.

Creating fake INDIANS was always an extermination strategy. Whites dressed up like INDIANS. They committed atrocities against their own people, killed and scalped them, planting evidence that the INDIANS had done it. On cue media quickly put out horror stories to rouse the public against us.
The colonial settlers were outraged and demanded retaliation. The military called town meetings. People demanded violent action against us. The raging mob was deputized and took matters into their own hands. They murdered our people, wiped out our villages and nations, stole everything, took over our land and hid their atrocities.

Today these “squeegie” INDIANS attack whites to force recognition of their counterfeit ‘tribal’ identity. They descend on stores and demand tax-free rights. White supremacists, skinheads and KKK fester nearby waiting to finish the dirty work.
This is a tactic of bankers, politicians, oil companies and multi-natlonal corporations who want everybody to keep buying oil, gas, hydro and other gew gaws.

Banksters looking ahead!
The head squeegies in the City of London are always trying to find ways to clean us out and then make us pay them. One onkwe’hon:weh took matters into his own hands. He installed solar and wind power, then sawed down the hydro poles and dismantled the wires on his property.
Mind control programming like the Handsome Lake religion in our longhouses is meant to defuse our culture, language, identity and to pacify us. The squeegies see any resistance as an excuse to put their squeegee back in the bucket and this time clean the window more thoroughly, that is, “impose martial law”! 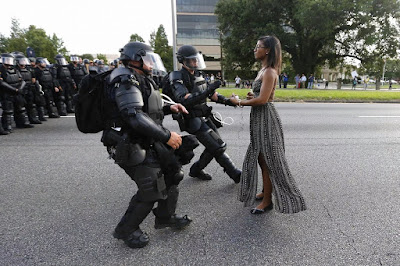 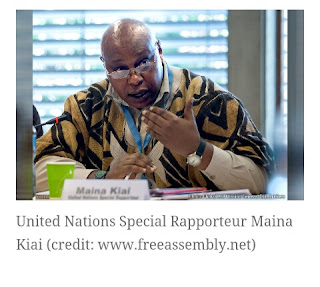 The United Nations' Special Rapporteur Maina Kiai is in the US to probe the right of peaceful assembly. The UN says it will meet with "civil society actors" (no kidding) in Phoenix, Ferguson, New Orleans, Jackson, Mississippi, Baltimore, and other locations.
Does reporting violations to the UN really make a difference?
Dineh at Big Mountain say they have been waiting 40 years for the UN to do something. Western Shoshone members said after a UN CERD (racial discrimination) ruling in their favor, it made no difference on the ground in a practical way.
Censored News would like to hear your thoughts. Does the UN result in any good for grassroots people, or communities.
Does testimony to the UN make a difference?
Write us, or comment below.
brendanorrell@gmail.com
way.http://www.ohchr.org/EN/NewsEvents/Pages/DisplayNews.aspx…

Freedoms of assembly and association: UN expert announces first official visit to the USA -
WASHINGTON / GENEVA (7 July 2016) – United Nations Special Rapporteur Maina Kiai will visit the United States of America from 11 to 27 July 2016 to make an in-depth assessment on the extent to which the rights to freedom of peaceful assembly and of association are enjoyed in the country.

Mr. Kiai’s visit will be the first information-gathering mission to the United States by an independent expert mandated by the UN Human Rights Council to monitor and promote the realization of the rights to freedom of peaceful assembly and of association worldwide.

“The United States was the main driving force behind the establishment of my mandate in 2010, and its recent renewal for another period of three years,” the expert noted.
“This visit will give me an unique opportunity to gather first-hand information on any good practices developed at the federal and state level in relation to the exercise of the rights falling under my mandate, but also to examine existing challenges in this regard, and advise the authorities how to overcome these”, he said.
During his sixteen-day visit, at the invitation of the Government, the Special Rapporteur will travel to Washington DC; New York, NY; Baltimore, MD; Ferguson, MO; Cleveland, OH; Phoenix, AZ; New Orleans, LA; Jackson, MS; and Philadelphia, PA, where he will meet with a wide range of officials, as well as with civil society actors.
The Special Rapporteur will share his preliminary findings and recommendations at a press conference on Wednesday 27 July at 11:00 am at the United Nations Information Center, 1775 K St NW #400, Washington. Access to the press conference will be limited to journalists. RSVPs are required to access the building. For media queries, please contact Ms. Karen Smyth (+ 1 202 454 2106 / cell: +1 301 351 0025 / smythk@un.org).
A final report of this visit will be presented to the UN Human Rights Council in June 2017.
Mr. Maina Kiai (Kenya) took up his functions as the first Special Rapporteur on the rights to freedom of peaceful assembly and of association in May 2011. He is appointed in his personal capacity as an independent expert by the UN Human Rights Council. Learn more, log on to: http://www.ohchr.org/EN/Issues/AssemblyAssociation/Pages/SRFreedomAssemblyAssociationIndex.aspx
The Special Rapporteurs are part of what is known as the Special Procedures of the Human Rights Council. Special Procedures, the largest body of independent experts in the UN Human Rights system, is the general name of the Council’s independent fact-finding and monitoring mechanisms that address either specific country situations or thematic issues in all parts of the world. Special Procedures’ experts work on a voluntary basis; they are not UN staff and do not receive a salary for their work. They are independent from any government or organization and serve in their individual capacity.
UN Human Rights, country page – United States:  http://www.ohchr.org/EN/countries/LACRegion/Pages/USIndex.aspx
For inquiries and media requests, please contact:
In Washington (during the visit, and for RSVPs for the Press Conference): Deborah Deyoung (deyoung@un.org / +1 202 331 8670)
In Geneva (before and after the visit):  Mr. Guillaume Pfeifflé (+41 22 917 9384 / gpfeiffle@ohchr.org)