MARKING THE ANNIVERSARY OF THE MOUNT POLLEY MINING DISASTER

Secwepemc peoples are calling on all to come and stand with us in resistance against mining and the provincial government's decision to re-issue a full permit for Mount Polley. Indigenous Peoples are at the forefront of the impacts and consequences of climate change. The root of climate change in Canada is the continuing genocide of Indigenous Peoples, that is, the continuation of destructive and dangerous resource extractive projects approved by the Provincial and Federal governments that have no legal jurisdiction to do so. We find ourselves in a state of urgency and crisis. The continuing violations of the rights and responsibilities of Indigenous Peoples by industries not appropriately regulated, regularly causing environmental damage and destruction, and most importantly, that do not have consent by Indigenous Peoples will not be tolerated!

Accessibility info: Free event. Childcare provided on-site. Dinner served. Kitchen’s entrance is wheelchair accessible at street level. One washroom has a stall that can accommodate a wheelchair.The washroom door opening is 86 cm, and the stall door is 61 cm.

If you can please bring non-perishable food items for the camp to the event: wild rice, potatoes, bread, corn, oatmeal etc.

We are arranging a bus to Yuct Ne Senxiymetkwe Camp (near Likely, BC) for all day gathering and sacred fire on August 4.
Leaving Vancouver at 8am from the safeway parking lot at broadway and commercial on August 3 and returning Aug 5 early morning.

--Bring own camping gear, water and water container, personal bowl and utensils, hand drums, and own chair if you need.
--If you need of a bed for accessibility reasons and/or are an elder etc, there will be a limited number of beds in a camper. Please email payet.scudellari@gmail.com to reserve a bed spot.
--While at camp, everyone is able is asked to cover one cooking or cleanup shift. This is a collective effort and we are all responsible for keeping the land clean.

Dakota and Lakota Youths Run to DC -- 'Run for Our Water' 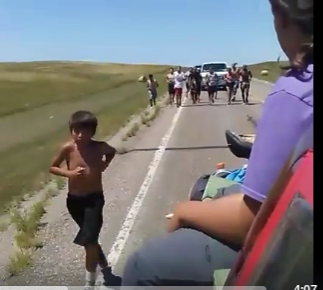 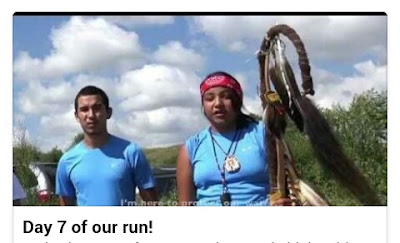 We are a group of young people from the Oceti Sakowin Nation taking a stand to be the voice for our community, for our great grandparents, and for Mother Earth.Since our petition launched, three months ago, we’ve started a movement of almost 140,000 people demanding that the Army Corps of Engineers deny a permit for the construction of the Dakota Access Pipeline through our Missouri River. Our campaign has been so successful, but it’s not enough: construction has already begun on the pipeline. We want to take this campaign to Washington D.C., straight to the doorstep of the Army Corps of Engineers’ headquarters and the White House – and we plan to run there. We’ll be using this 2,000-mile relay run to elevate our campaign into national awareness by connecting with other youth groups along the way, and working hard to get more supporters. Decision makers can’t ignore 140,000 signatures left on their doorstep, especially when we’ve traveled so far to deliver them.

If the Dakota Access Pipeline is built through the Missouri River, it risks our health and our water. This summer, we’re running for our lives. Support us by donating to our Relay Run fund, by running with us or by hosting our runners in your city. We’ll be posting the list of destination cities soon!

Bobbi Jean Three Legs bobbi.jean@ocetisakowinyouth.com
Censored News
Des Moines, IA — At 11:00 a.m. on Saturday, July 23 in front of the Neal Smith Federal Building, 210 Walnut Street in Des Moines, Lakota and Dakota youth on a 2,000-mile relay-run to Washington, D.C. will hold a rally and protest to challenge President Obama and the Army Corps of Engineers to take action to stop the Bakken Pipeline. (See their promotional video here.)
Thirty-one young people from the Oceti Sakowin lands in North Dakota are running through Iowa July 19-25, roughly following the path of the Bakken pipeline. They will arrive in Washington, D.C. on August 5 and deliver over 140,000 signatures (people wishing to sign the petition can do so here) against the Bakken Pipeline to the Army Corps of Engineers. They also will rally in front of the White House, calling on President Obama to tell the Corps that a full Environmental Impact Statement is needed to show the harmful impact of the pipeline on their native lands and waters.
“In May, we led a relay race over 500 miles to deliver signatures to the Army Corps of Engineers in Omaha,” said Bobbi Jean Three Legs, one of the organizers. “Young people from across the Oceti Sakowin lands and non-Native youth ran over eight days through South Dakota, Nebraska and Iowa, from reservation to reservation, through small towns and bigger cities along the Missouri River. Corps officials listened, but they still haven’t stopped the pipeline. We are now taking our message all the way to Washington, to the Corps’ headquarters there and to President Obama, to tell them to put an end to this act of aggression against our people, our land, our water and our future.”
“The passion and commitment of these tireless young people is contagious,” said Bold Iowa director Ed Fallon. “Their message is being well-received across Iowa, where 74% of us oppose the use of eminent domain to build the Bakken Pipeline. We hope their message is equally well-received by President Obama and the Army Corps of Engineers.”
Bold Iowa is part of the national Bold Alliance, now in five states and building new alliances to fight fossil-fuel infrastructure expansion projects and promote renewable energy. Visit www.boldnebraska.org/tag/bold-alliance.
Oceti Sakowin Youth and Allies calls on the Army Corps of Engineers and President Obama to stop construction of the Bakken Pipeline because it will cause harm to the great people of this nation whose water and livelihood depends on the Missouri River.'Stop the  Dakota Access 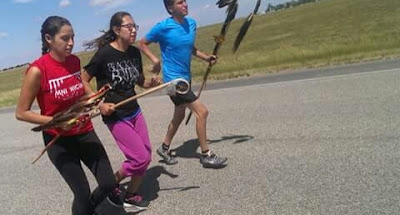 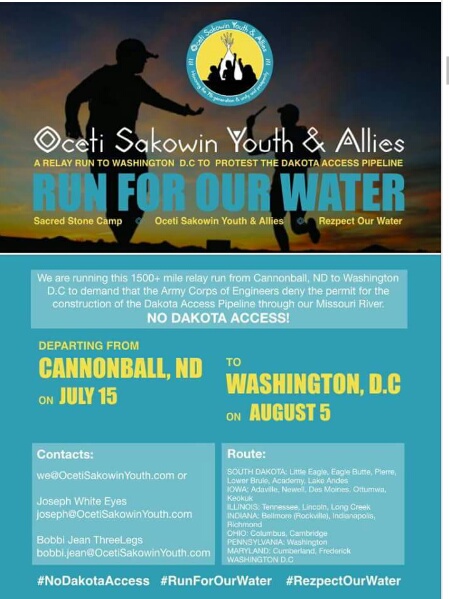 Fort Yates, ND
JUL 21, 2016 — Today is Day 7 of our run and we are in high spirits! We’ve passed through South Dakota, and are making our way through Iowa. Some days are tough in this summer heat, so we work to care for each other and make sure everyone is drinking enough water and staying healthy.
This Saturday July 23rd at 11 am, we’ll be taking part in a rally in Des Moines, Iowa. If you are in the area come join us! We’ll be meeting at the Neal Smith Federal Building, on 210 Walnut Street. You can read more about the event here: http://bit.ly/2ad8Oht
If you would like to learn more about our journey, take a look at this video we’ve made or check out the #RezpectOurWater hashtag on Facebook. We’ll send more updates soon!
Anna Lee and Bobbi Jean