Dakota Access Pipeline has given the State of North Dakota $15 million for bringing in police who carried out excessive force to ensure the construction of its pipeline at Standing Rock.
Those police and National Guard -- orchestrated by Morton County Sheriff Kyle Kirchmeier and TigerSwan mercenaries -- shot peaceful water protectors with rubber bullets and tear gas, blasted them with water cannons in freezing temperatures, beat them, and imprisoned them in dog cages with numbers written on their arms as was done by the Nazis.
Now, in an egregious act of a corporation paying for the abuse of peaceful protesters, and the violation of their civil and human rights, which resulted in serious injury, the State of North Dakota has received its payoff from the private corporation Dakota Access Pipeline, owned by Energy Transfer Partners in Texas.
Native Americans and their allies are protecting the Missouri River, the source of drinking water for millions, from the oil pipeline, which was approved during the Obama Administration, and propelled forward by the Trump Administration.
North Dakota Gov. Doug Burgum says Dakota Access donated $15 million to North Dakota's Department of Emergency Services “to help reimburse the state for the money it spent responding to the Dakota Access Pipeline protests.”
The donation was wired to the Bank of North Dakota Thursday and will be used to pay down the loans taken out the Department of Emergency Services (DES), KFRYTV reports.
Los Angeles Times reports, “The state has arranged for a bank credit line of up to $43 million to cover policing costs, including $5 million just added this week. Maj. Gen. Alan Dohrmann, who heads the North Dakota National Guard, has said costs shouldn't go past that figure.”

Meanwhile in North Dakota, the biased media continues its support of these criminal acts by the State of North Dakota, Morton County and police.
In international news today, The Intercept reports on DAPL surveillance for police over Standing Rock water protectors.
The private oil pipeline corporation worked with police using a privately-owned yellow helicopter and used this stalking, with prosecutors, as evidence against them in court.
.https://theintercept.com/2017/09/29/standing-rock-dakota-access-pipeline-dapl-no-fly-zone-drones-tigerswan/
Below: Today's The Intercept. A police officer shoots at a drone at Standing Rock.
. 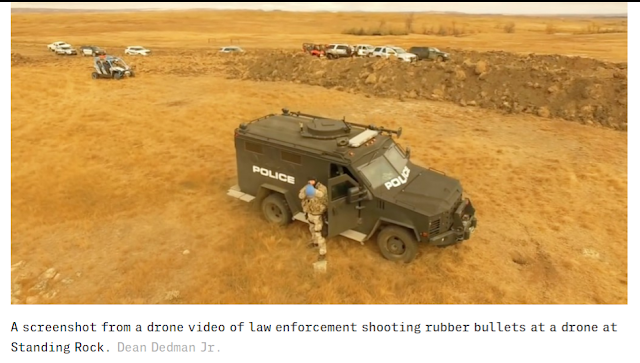