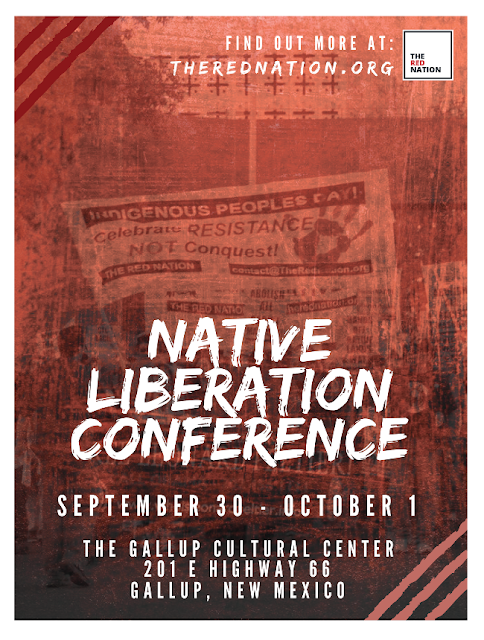 Gallup, NM, September 20, 2017 — The Red Nation invites anyone interested in organizing for Native liberation to its second annual conference. The conference will be held at two venues:
During the conference, there will be various workshops and forums facilitated by Native organizers and revolutionaries based out of Gallup, Phoenix, Albuquerque, Window Rock, and elsewhere. Allied organizations and movements will also be presenting. The primary aim of the conference is to orient, update, and educate The Red Nation membership, as well as the general public, on local, regional, and international movements for Indigenous liberation.
Learn how to organize and fight settler colonialism, capitalism, heteropatriarchy, police violence, the rising tide of fascism, and more!
Seminars and workshops will focus on a range of topics including:
Confirmed speakers include Diné-Pueblo Youth Alliance, K’é Infoshop, Border Town Justice Coalition, and more! The full agenda will be released soon. Stay tuned! The agenda will be released soon.
If you’re interested in The Red Nation, curious about movements for Indigenous liberation, or just want to organize for revolution, this conference will be an opportunity for you to connect, learn more, and get involved.
This is an all-ages event, open to the public, and no admission or registration is required. All are welcome! Food and beverages will be provided. If you’re coming from out of town, we can provide limited accommodations. Please contact us ahead of time for lodging and/or to arrange accessibility services.
#NativeLiberation
CONTACT INFORMATION:
RSVP on FacebookPhone: (505) 226-1170Email: contact@therednation.orgWebsite: http://www.therednation.orgFacebook: https://www.facebook.com/therednation/Twitter: @The_Red_Nation