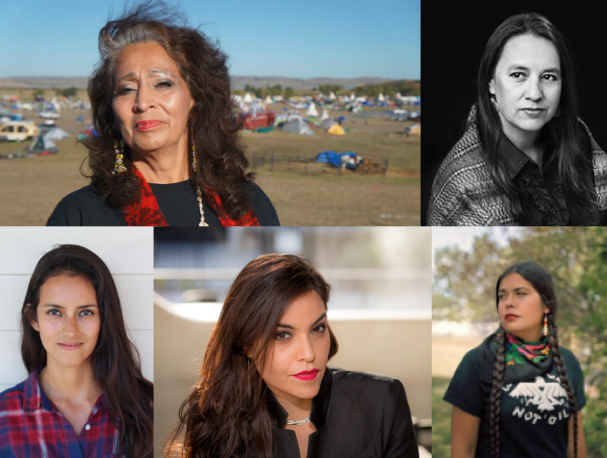 SAN FRANCISCO BAY AREA, California (September 20, 2017) – From September 30th through October 14th, 2017, a delegation of Indigenous women from across the United States who have been at the forefront of the Dakota Access Pipeline (DAPL) resistance effort and other movements to stop fossil fuel extraction and infrastructure which pose threats to Indigenous and human rights, self-determination, lands and culture will travel to Norway, Switzerland and Germany. The delegation will urge financial institutions to divest from and cancel credit facilities with pipeline companies that endanger rights and neglect Indigenous People’s right to Free, Prior, and Informed Consent (FPIC) as outlined in the United Nations Declaration on the Rights of Indigenous Peoples.

Norway, Switzerland and Germany house several of the world's largest financial institutions that, through either corporate level or project level finance, support dangerous extraction projects across Indigenous territories in the U.S. and globally - making these countries vital locations for frontline and impacted women leaders to engage directly with banks, public officials, civil society groups, and media.
The Autumn 2017 Indigenous Women's Divestment Delegation, facilitated by the Women’s Earth and Climate Action Network (WECAN) International in partnership with Indigenous women leaders and their directives, is part of a growing movement that has found the pursuit of institutional divestment to be an effective strategy to hold banks and fossil fuel related companies accountable to indigenous rights and protection of land, climate and water.

In addition to advocating for fossil fuel divestment and investment in a renewable energy future - delegates will share vital updates regarding the Dakota Access Pipeline, the growing pipeline resistance by Indigenous peoples and allies to Keystone XL (TransCanada), Trans Mountain (Kinder Morgan), Energy East (TransCanada), and Line 3 (Enbridge) pipeline projects; and the success of municipal divestment campaigns across the United States.
The Delegation will be based in Oslo, Norway from September 30 - October 4; in Zurich, Switzerland from October 5 - 10; and in Munich and Frankfurt, Germany from October 11 - 14. Press and media are encouraged to reach out to WECAN International to schedule interviews.

“We stand to protect the water and our Mother Earth. We stand to divest from fossil fuel so our children can live. We stand because we have no other choice. Min Wiconi, Water is Life.” explains LaDonna Brave Bull Allard (Lakota historian, member of the Standing Rock Sioux Tribe and founder/landowner of Sacred Stone Camp)

“Indigenous peoples impacted by DAPL and destructive fossil fuel development projects are determined to continue education and advocacy efforts related to bank divestment from companies causing and/or contributing to indigenous human rights abuses in the United States. The Divestment Delegation is an opportunity to evaluate the efficacy of banks’ human rights policy as well as to educate the public on the distinctions and contrasts between the normative human rights standards of Free, Prior, and Informed Consent (FPIC) and its negative image; a coercive indigenous consultation model practiced by state and non-state actors for natural resource extraction in the U.S. In spite of the human rights violations, it is also a time for indigenous peoples and communities to vision, imagine, nurture, and create new and more just balanced economies.” explains Michelle Cook (Diné/Navajo, human rights lawyer and a founding member of the of the Water Protector Legal Collective at Standing Rock)

"I always knew that I had to prepare for something, a time when the people and land would need me to be ready.  That time is now.  What will you do when that time has arrived? For those of us, who know that we need to change how all of us live on this earth so that we may live, so our grandchildren who are not yet born may have a chance - we have to stand up, and make our voices and our power known. That time is now." explains Dr. Sara Jumping Eagle (Oglala Lakota and Mdewakantonwan Dakota pediatrician, living and working on the Standing Rock Reservation, North Dakota)

“We will carry one message from our homelands to financial institutions in Europe: respect indigenous women’s rights to Free, Prior, and Informed Consent. If banks continue to harm our women, children, and elders, we will continue to push divestment and hurt what is most precious to them - their bottom dollar." explains Jackie Fielder (Mnicoujou Lakota and Mandan-Hidatsa, Campaign Coordinator of the Lakota People's Law Project and organizer with Mazaska Talks)

“Gross human rights violations associated with fossil fuel infrastructure are not limited to the well-publicized fight at Standing Rock. All over the world, indigenous peoples and Mother Earth's finite freshwater resources are threatened by needless fossil fuels projects. We ask the banking industry to take a stand for all people that big oil won't. Stop funding destruction and abuse with consumer money. We want just transition to renewable energy and the lives of your customers to matter more than oil profits.” explains Tara Houska (Anishinaabe, tribal attorney, National Campaigns Director of Honor the Earth, former advisor on Native American affairs to Bernie Sanders)

“With extreme weather from devastating floods to raging fires currently being experienced around the world - it could not be more clear that the Earth is sending us an urgent message that we must take immediate action to keep fossil fuels in the ground - and re-vision and re-build a just and sustainable future for all. In the context of the global Fossil Fuel Divestment movement, the Women's Earth and Climate Action Network is working to ensure that Indigenous and frontline women have the opportunity to speak for themselves, directly to the institutions, governments and policy makers whose decisions are harming their communities and territories through their continued investment in violent, destructive projects. It has never been more vital to listen to the voices of Indigenous women leaders. Together, with their voices at the forefront, we can restore the health of our communities, transition to clean energy, and seek justice for those who continue to be impacted on a daily basis by fossil fuel development at Standing Rock and around the world.” explains Osprey Orielle Lake (Executive Director and Founder of the Women’s Earth and Climate Action Network, WECAN)