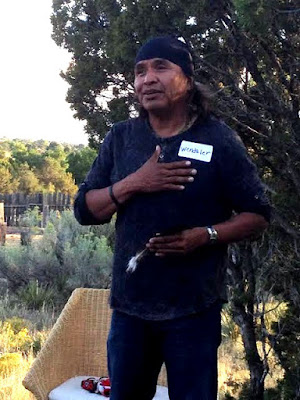 Wendsler Nosie, Tracker of Evil at the Santa Fe Plaza

This interview was conducted on Saturday, September 9, 2017
San Carlos Apache activist Wendsler Nosie came to Santa Fe to participate in the third annual street protest against the public Entrada costume pageant on September 8, which depicts Spanish Conquistadores reconquering the city 12 years after being forcibly expelled during the Pueblo Revolt of 1680. When Censored News caught up with Mr. Nosie, evil was on his mind.

What happened yesterday in the plaza?

I felt the unrest feeling, and I didn't know why I was feeling that way. It was cold, something was wrong with that place. And then I was told about the 70 executions of Pueblo people ordered by Don Diego de Vargas in 1693. There was a wrong that occurred there, and it has to be healed. The true history has to be told, and that place should be treated like a cemetery, a memorial, where the losses are respected.

As we speak, some young Natives are in the Santa Fe County Detention Center for asserting the truth about that history.

I was really proud of them. They didn't carry fear, they're not afraid of being visible and heard. I care about them and hope that now that they've received attention that they will use their spiritual ways to carry this struggle forward. Through that many things can blossom. I also applaud the non-Natives who were arrested. We need to be unified in the message of healing of this country, and grow as a family.

Healing from what specifically?

Colonization. This country was founded on resource extraction. The early Europeans wanted our minerals and riches to take back to Europe. Santa Fe needs to hear the hard truth about when history begins—there was life here before the Spanish arrived. The Fiesta Council needs to talk to Native Americans and think through together how we go forward. And there needs to be a memorial on the plaza for the 70 Pueblo leaders hanged to death by de Vargas.

What words do you have for the Santa Fe Police Department who enforced Mayor Javier Gonzales' "Free Speech Zone"?

I realize they have a difficult job. No matter what, there's that compassion. But I personally witnessed agitators, three of them, provoking the Natives saying "go back to the reservation, you've got nothing to do with this" and the officers just smiled at them. The police could have told them to stop it. If I had said it, they would have thrown me in jail.

How has this changed your opinion of Santa Fe?

To be honest, I am shocked, it kind of blew me away that there are these kinds of reenactments here. It frightened me that it could even occur. What the mainstream society has to understand is that our kids are standing up; they're not going to take it anymore. It opened my eyes. We definitely need to stay active on this.

What worries you most right now in these challenging times? What keeps you up at night?

The preservation of our "deep water." In Phoenix when students were asked where water comes from they said "the faucet." Not the mountains, not the rivers, not the aquifers. With mining, with the acids they use, they're killing the future. Corporations don't care—their way is the cheapest and shortest way. They're focused on profits, with less concern about impacts.

How has Standing Rock changed things?

You have said that Trump is a gift to America. What do you mean by that?

He's opened all the wounds and exposed the weakness of America and along with that the need for a new foundation, and a new road to recovery. What I see post-Trump depends on what we do right now to make a better future for our children, and those not yet born. If we don't act now, things will be even more in shambles. Politicians are learning from Trump how to game the system; he's showing them all the loopholes. We have to forced our elected leaders to fix this right now.

Do you ever speculate about what Turtle Island may have been like if we could magically erase Colonization, if violent conquests and reconquests like the one celebrated in La Entrada had never happened in America?

If the Europeans had never come looking for resources, or if they had come for the right reasons, it would be far better here and around the world in every way. We already had it all—an economy base, healthy relationships with the earth and each other, our own religion. Our world was intact, and they destroyed it.

But we all have a conscience and a spirit, remembering that is the best chance the Indian people have. Don't depend on the law, laws can change. So many are obsolete, enacted without us.

Yes, exactly. Now is the opportune time. We have to have a greater place in those discussions. We have the greatest gift we can give the world, and it hasn't been given yet.

I am a tracker of evil; I teach my people about evil, the dark cloud of Colonization. How it affects us, has made us cut our own roots from under our very feet. Christians go to church on Sunday, but being Apache is every breath you take. I want my people to know evil and recognize it, because the worst evil's ahead of us. We have to be ready for that.