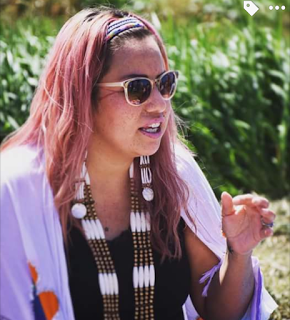 We had a pretty messed up meeting with Credit Suisse. The 'sustainability officer' smirked the entire time we talked. He said that we, as American Indians did not have a genocide. He said the Holocaust and the Armenian massacres were genocide. He said he is an historian and not to talk to him about genocide. I felt this rage building up in me but Rachel handled him, then Rafa. The banker then dismissed our claims and said they will continue to fund projects as long as there is a need, despite the abuses that occur.Thank you Geneva, thank you Swiss people. But what really could I really expect from a country so steeped in neutrality it hides the gold and priceless art pillaged from the Jews during the wars? A country that let the Nazis massacre French people only a few miles from where I sit? What a f*n joke.
.
Rachel Heaton, Muckleshoot, now is in Barcelona; Nataaanii Means, Dine' Lakota, is in Madrid and Rafael Gonzalez, Dakota, is in Spain, as the Water Protectors continue through Europe.

Also see:
Nataanii Means described the abusive treatment the Water Protectors dealt with in Paris. Rachel Heaton and Nataanii spoke to the shareholders of Société General, BNP, and Nataxis banks in Paris. "We were met with derogatory yelling, boo's, and confrontation. When we stated that these banks and their investments into overseas pipelines directly affect my people and community, people began to make so much noise meant to muffle our voices while we were speaking. We were treated with unbelievable disrespect.”
Read more at Censored News
http://bsnorrell.blogspot.com/2017/05/standing-rock-water-protectors-leave.html
at June 09, 2017 2 comments: