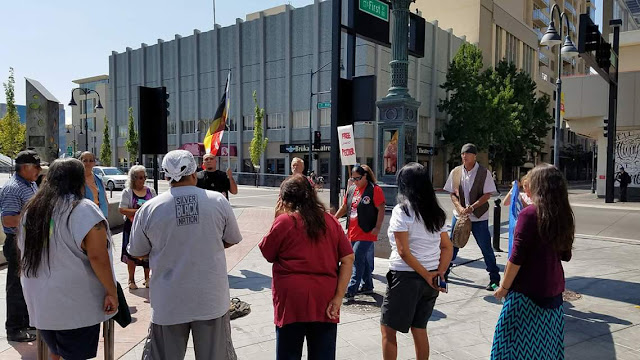 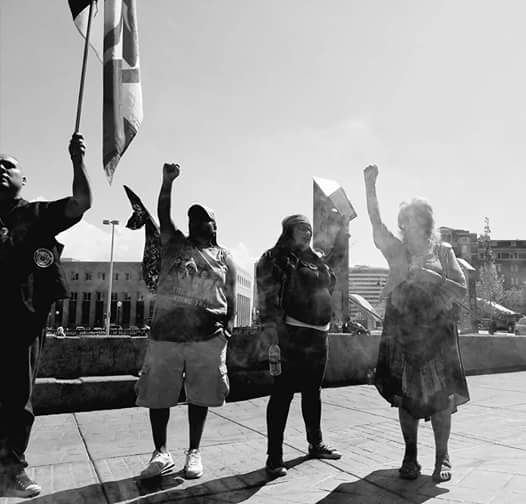 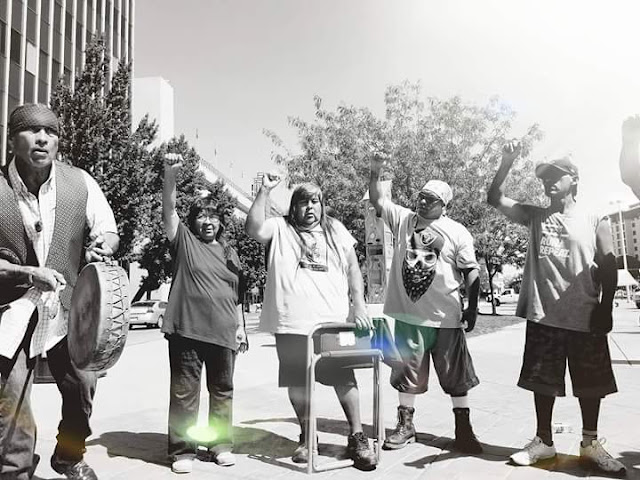 12 Arrested by Santa Fe Police Department for Protesting the Entrada of the Fiestas de Santa Fe; At Least 8 Charged with Misdemeanor Crime of Criminal Trespass, to be Held Overnight

SANTA FE -- A demonstration of several hundred Natives and non-Natives protesting La Entrada, the annual celebration of the reconquest of Natives by Spanish Conquistadores in 1692 twelve years after the successful Pueblo Revolt, ended in a dozen arrests of protestors, primarily for criminal trespass.

At 5:09 pm, the individuals singled out for arrest at the 3rd consecutive protest of La Entrada at the Fiestas de Santa Fe were brought into the Santa Fe County Detention Center for booking. At least eight of those were arrested for Criminal Trespass, a misdemeanor, and one of the eight was additionally charged with Disorderly Conduct, a petty misdemeanor under the New Mexico criminal statutes.

At around 8 pm, Santa Fe Police Department Public Information Officer Greg Gurule told Censored News that 80 officers were involved in the arrests, and that no one had been hurt.

The irony of Natives and their non-Native supporters being arrested on stolen Pueblo land for criminal trespass was not lost on the friends and partners of some of those arrested, who were waiting along with Censored News for the arrival of the arrestees at the Detention Center. Ordered by a stern group of four security officers to vacate the parking lot, or be subject ourselves to arrest for trespass, we were not permitted to stand at a distance even of a hundred yards and watch them get out of the van to make sure they were all intact. There was cause for concern because at least half a dozen of those arrested had been held in the police van for over four hours, and temperatures had risen outside to 81 degrees.

Dan Cron, Esq., who has organized the arrestees' access to what he termed a pro bono legal defense "strike force," explained the process for release of arrestees charged in the Magistrate Court system. (Municipal Court or District Court release processes may be different.) Cron told Censored News that on July 1, 2017 an amendment to the NM State Constitution went into effect that revised the prior bond and release system. In the pre-amendment system, bond could be posted almost immediately and people could be released by virtue of paying the bond. The problem with that system he explained was that many indigent people could not raise the few hundred dollars needed to post bond, and often languished in incarceration.

Since the amendment has gone into effect, judges are required by law to evaluate cases within 48 hours, in this instance by Sunday afternoon/evening at the latest. If the arrestee is determined not to be a danger, bond is allowed to be posted and the arrestee released. Santa Fe's four Magistrate Court judges serve on a rotation basis and usually go to the detention center on Saturdays and Sundays, so it is possible that the arrestees will be released tomorrow (Saturday), or not.

La Entrada, which was scheduled to be held from 2-3 pm, was unexpectedly moved to noon today, and the program, usually an hour long, was curtailed to twenty minutes. Censored News got wind of the schedule change around 11:30 am, and reached out to Matt Ross, Santa Fe's Public Information Officer and Rima Krisst, Santa Fe Tourism's Tribal Liaison for confirmation and explanation, but received no response from either city employee.

The Entrada protest, which had been called by organizers for 1pm at Cathedral Park, where the protestors had planned to rally before marching to the nearby plaza, was caught by surprise. Organizers abandoned the idea of gathering at Cathedral Park and told attendees to proceed directly to the plaza where the reenactment of Don Diego de Vargas entering the city to retake it for the Spanish crown was underway. When protestors arrived at the plaza in this more haphazard way, another surprise awaited them--a cordoned off area designated as a "Free Speech Zone."

The concept of a "Free Speech Zone" was a hallmark of Michael Bloomberg's mayoralty in New York City. Santa Fe Mayor Javier Gonzalez recently received $800,000 in support of a failed "soda tax" measure from the billionaire whose net worth, according to Forbes, is estimated to now be $53 billion. Bloomberg's fortune rose from only $4 billion, when he assumed the mayoralty in 2001. He is now the 6th richest man in Turtle Island.

Today in Santa Fe protestors were corralled by the police into Mayor Javier Gonzalez's "Free Speech Zone," and those who ventured outside its confines to continue the protest were subject to arrest.

Witnesses said that Jennifer Marley, one of the lead organizers of The Red Nation, a sponsoring organization of the protest, was forced to the ground by at least four officers, handcuffed and paraded up and down a street for no apparent reason.