LAKOTA MEDIA PROJECT
Censored News
PINE RIDGE INDIAN LAND -- This year’s annual “Gathering on the Homeland: Solidarity, Decolonization and Celebrating Acts of Resistance” kicked off the 45th Anniversary of the Occupation of Wounded Knee on the Oglala Lakota homelands last month.
The event, held in Manderson, South Dakota, was sponsored by Owe Aku (Bring Back the Way), a grassroots organization based on the Pine Ridge Indian Reservation, and the Robin Hood Fund, hosted a variety of activists from across Turtle Island to foster solidarity and share their experiences on the frontline of non-violent direct actions.
Oglala Lakota elder Alex White Plume opened the gathering with prayer and led a feather ceremony to honor four young warriors for their bravery and commitment to protecting the water and defending the land.
.
Photo: Wacinhin Rosebud White Plume, of Lakota Media Project, with infant daughter Angel, was a panelist for the Guerrilla Media breakout session at the 2018 Gathering on the Homeland. Photo credit: Natalie Hand/Lakota Media Project
Gathering coordinators Debra White Plume and Olowan Martinez posed a question to the guest panelists -- whose roles range from bloggers, to cooks, to medics -- were asked to describe their definition of “what is movement?”
What is Movement?
“As we witnessed at Standing Rock, knowing our roles is crucial to a successful movement,” stated Mark Tilsen, Jr. Oglala Lakota activist, poet and teacher, among the panelist.
Lilas Jarding of the Black Hills Clean Water Alliance noted, “We need a cross-section of people in any movement. Information gathering is also an important component.”
Among the panelists sat a legendary activist that has devoted his life to, quite literally, feeding the resistance movement. Known only as “Grumble,” this unassuming humble man has fed thousands of resistors over the span of decades. Through the support of Seeds of Peace, his ability to whip up five-star cuisine from a few ingredients and deliver to a frontline action is quite remarkable. But Grumble shrugs off any notion that he’s special.
“In any movement, you must have sustenance to keep the warriors strong and focused,” stated Grumble.
Youth have always been an integral part of resistance movements. What made the NoDAPL movement unique was the large contingency of youth that led the charge to raise awareness and stop the pipeline. Led by Lakota youth, the International Indian Youth Council ran from Standing Rock to Washington, D.C., to pressure lawmakers to reject the permits for Energy Transfer Partners pipeline through their treaty territory.
“Five or six of us came together and decided to do this run. When we arrived in D.C., we were given a cannupa (sacred pipe) from the White House Archives. Our run brought a lot of awareness to the cause. We need the elders to trust us and allow us to have opinions.  A movement needs people of all ages to be successful,” stated Terrell Iron Shell, co-founder of International Indian Youth Council.
Keynote speaker and Idle No More (www.idlenomore.ca ) co-founder Nina Waste’ Wilson of Saskatchewan expounded on her continuing work and gave insight on adapting to the ever-changing landscapes in the resistance.
“The work we all do in resistance movements is extremely critical and not something that can be found in conventional training sessions. I have been incredibly focused on working in my homeland on decolonizing education, and skill building in resurgence and resistance. My focus has been on my own territory and community which is not very close to any city center.  This means life's challenges are different on the reserve, so organizing and mobilization must also shift to fit the people where they are at, the land where it's at, and the resources, where they are at,” stated Wilson (Cree/Dakota/Nakoda).
.
Youth participants at the Gathering on the Homeland took part in a free art workshop, sponsored by Native Artists in Action. Photo credit: Natalie Hand/Lakota Media Project.

Guerilla Media
A break-out session at the Gathering focused on “guerilla media” and its impact on resistance movements.  The technology age has allowed for activists to document and deliver news in real time. A small, non-profit media organization from Minnesota, known as Unicorn Riot, quickly became the pinnacle of guerrilla media during the 2016-2017 NoDAPL resistance in North Dakota. Unicorn Riot correspondents were on the ground at Standing Rock from the beginning, capturing hundreds of hours of intense footage and interviews that led to the production of the 2017 documentary, “Black Snake Killaz: A #NoDAPL Story”.
“In media, it’s whoever tells the story first, wins. On the frontline in North Dakota, I carried gear that would sustain me for two days, in case I would need to run and hide to get the day’s story out,” stated Lorenzo Serna, guest panelist and co-founder of Unicorn Riot.
People from around the world, that could not get to the NoDAPL camp, were able to act as ex facto witnesses to the militarized law enforcement’s abuses against unarmed water protectors, through the eyes of Serna and other guerilla media correspondents on the ground there like Rose Stiffarm.
Stiffarm, (Anishinaabe/Siksika/Cowichan/Tsartlip/A’aninin/Nakoda) filmmaker and guest panelist, led an intensely popular blog about the non-violent direct actions (NVDA) happening at Standing Rock.
“When I first arrived at Standing Rock, I noticed there was a lot of non-native media correspondents covering the resistance. I believe that indigenous media needs to be in the forefront at these actions, with indigenous peoples telling indigenous stories,” stated Stiffarm.
The artistic side of resistance is incredibly powerful and valuable in building that critical thinking in those that frontline.  It assists in countering symptoms of trauma and genocide by helping rewire thought patterns so that experiences become healing,” stated Wilson.
From the day’s discussions, a collective of media correspondents, led by Wacinhin Rosebud White Plume of Lakota Media Project, formed the Indigenous Resistance Media Network.  Their purpose is to provide a platform to share media contacts to catapult critical stories to a broader audience.
“Lakota Media Project, and like-minded Indigenous media groups provide media for the people from the people. Our voice is our new weapon,” stated White Plume.
Youth Art
The Gathering featured a free art workshop for youth in attendance. Art, whether through photography or painted banners, is an expression of one’s feelings in the moment and often becomes a historical reference.
Bishop UndurDog and brother Legun (Zuni/Kiwa Pueblo) of Native Artists in Action, working in partnership with Ama’s Freedom School, hosted the art workshop that taught youth “street-style” graphic designing on t-shirts. All participants chose the design they wanted and learned how to paint it on their shirt.  The youth also created crepe paper flowers, requiring intense eye-hand coordination and fosters patience and diligence, which is essential in any resistance movement. Native Artists in Action will be returning to the Pine Ridge Reservation to June to further their work with Ama’s Freedom School. (www.oweakuinternational.org )
Resistance Music
Music is medicine for any resistance movement.  Whether it is a prayer song or a contemporary anthem, music can empower and bind people together for a common cause.
This year’s event ended with the annual “Sounds of Resistance Youth Concert” and featured a variety of indigenous artists, including flute player Debra Martin, rappers Witko, Bishop UndurDog, Legun, and Rouge, grunge rocker Davidica Little Spotted Horse, and balladeer Tracy Bone.
“It was an honor and privilege to have the opportunity to share songs, build my awareness and skills at the Gathering and the Sounds of Resistance youth concert. The workshop panelists were very informative and experienced. The concert performances were beautifully creative. Thanks to the organizers and participants of the event for sharing and keeping the community connected with arts and education,” stated Tracy Bone (Anishinaabe) singer/songwriter and guest performer at the Sounds of Resistance Youth Concert.
“I’m grateful to have been invited to the Gathering on the Homeland. It is important for people to come together to help future generations know the importance of community and to come together to discuss ideas, celebrate resistance music, for the kids to learn about art and for everyone to eat food together. I look forward to attending this event in the future,” added Stiffarm.
Organizers took time to honor and offer prayers for a young Lakota woman who has been missing since October 3rd, 2016. Larissa Lone Hill, of Manderson, was last seen by her mother Lisa on October 2nd in nearby Rapid City. The family created a Facebook page to keep her case updated. (www.facebook.com/keepprayingforme/ )
Lisa Lone Hill shared an emotional account of her daughter’s disappearance at the Gathering. Wilson, who does extensive Missing/Murderded Indigenous Women (MMIW) work in Canada, came forward to offer encouraging words and prayers for Lisa and the Lone Hill family.
To cap off the day’s discussion, a special presentation was made in American Sign Language (ASL). Rachel Kills Small (Oglala Lakota) resides in the deaf community of Pueblo, Colorado, and has worked tirelessly against racial stereotypes concerning indigenous peoples within the ASL community. She attended this year’s Gathering to present the sign for the American Indian Movement, which she created and was officially accepted as a sign for ASL.
This year’s Gathering left participants with a renewed sense of purpose and self-pride.  Indigenous peoples have survived over 500+ years of genocide and subjugation at the hands of colonial oppressors, and yet still, they remain and thrive.


“The event itself was very well organized and participation was focused and engaging, thanks to some real skills by the organizers.  It's incredibly important for those working on resistance to have time to gather together to continue to build bridges as the work itself can be very isolating.  The isolation is countered by the organizing that has deeply inclusive goals for those presenting as well as those learning. This gathering was exactly what I needed to show me I'm focused and on the right track and I can't say enough good things about it,” stated Wilson.


Article and photos copyright Natalie Hand
at April 01, 2018 No comments: 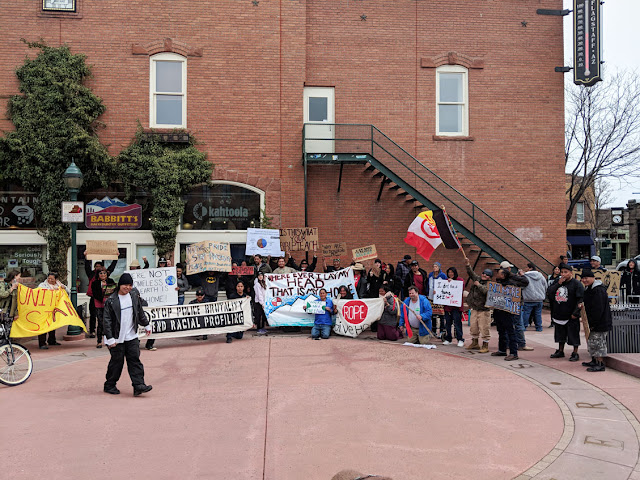 Unsheltered Indigenous People Rally Against Racism & Racial Profiling In FlagstaffUnsheltered Indigenous community members organized a rally on March 24, 2018 to end racism and racial profiling in Kinłani also known as “Flagstaff.” They shared their experiences and calls to action.Shane R. stated, “Before 1492 we we’re never homeless, we always had a place to live.”In 2006 The National Coalition for the Homeless named the City of Flagstaff the 10th “meanest” city in the U.S. due to policies targeting the “homeless” or unsheltered population.According to annual reports from the Flagstaff Police Department,the City of Flagstaff arrests an average of more than 3,000 Indigenous People every year yet only 7,000 Native people call Flagstaff their home.Unsheltered relatives called for: Immediate end to Flagstaff’s Anti-camping ordinance End to the “ROPE” repeat offender program Passage of a Homeless Bill of Rights Culturally based shelter and rehabilitation center supported by Navajo Nation and other Nations They also announced that they are going to wear body cameras to document police harassment and violence.You can support their efforts here: www.taalahooghan.org/support-unsheltered-relatives/
at April 01, 2018 No comments: