Lakota attorney Chase Iron Eyes will be in court on Wednesday, April 4, at 1:30 pm in Mandan, North Dakota, for a hearing related to his criminal defense. His charges stem from the nonviolent Last Child stand on Feb. 1, 2017 at Standing Rock

Update -- "The state is now refusing to cooperate in handing evidence over that will assist in Chase's potentially-groundbreaking necessity defense. We just received news that the prosecutor is bringing in a special witness to challenge the notion that TigerSwan colluded with law enforcement during the protests.  We had a hearing before Judge David Nelson on Nov. 3. The State was given until Dec. 31 to provide our requested documents,” said LPLP attorney Daniel Sheehan. “And they stiffed us. Our opinion is that, frankly, they are afraid of the necessity defense, and they are jumping through every hoop to try to stop it.” 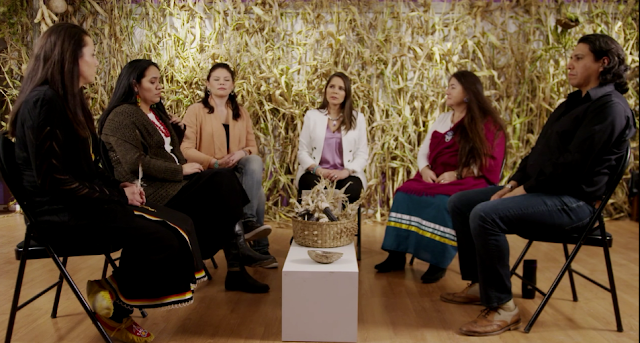 SYRACUSE, N.Y. (April 4, 2018) – “An Indigenous Response to #MeToo” is a new half-hour Rematriation Magazine film featuring a group of cultural change-makers from Haudenosaunee Six Nations territories and the Guachichil de La Gran Chichimeca. The film’s purpose is to share a culturally grounded and relevant response to address the #MeToo movement in Indigenous communities, to start group conversations and to lean into culturally based solutions.

Recently, more than 70 Indigenous people from across Haudenosaunee territories and communities around the world met for the 2018 launch of Rematriation Magazine – “Returning the Sacred to the Mother” at Syracuse University S.I. Newhouse School of Public Communications. Rematriation Magazine, an Indigenous women’s online publication, will include feature stories, videos, podcasts, interactives and other multi-media offerings focusing on topics important to Indigenous women. During the meeting, the women and men also discussed the #MeToo movement and how it has differed in Indigenous communities across Turtle Island from the mainstream. “An Indigenous Response to #MeToo” was a result of this discussion.

“The #MeToo movement has taken the country by storm and this is why I asked a group of Indigenous people to come together to discuss what is – and what is not – going on so that we can extend the conversation into our communities and take control of the narrative,” says Michelle Schenandoah, chief executive officer and editor in chief of Rematriation Magazine. “We are not part of the mainstream society; yet knowing how pervasive sexual abuse is in our communities, this film provides a backdrop to explore this issue in our own way.”

“This film is intended to start group conversations within our Indigenous communities. We highlight examples of women and men who’ve created change by leaning into traditional teachings and ceremonies – and the impacts have been profound,” says Schenandoah. “Acceptance of the mainstream does not have to be our response; it’s not the healthiest option for our communities and we have our culture to help guide us.”

"‘An Indigenous Response to #MeToo’ makes an important, vital and timely contribution to the conversation on sexual and other forms of gender violence,” says Hayley Marama Cavino, Ph.D., Māori: Ngāti Pūkenga/Ngāti Whitikaupeka, professor of Native American and Indigenous Studies at Syracuse University (the film premiered on April 3 in Cavino’s Indigenous Women’s Lives class at the university). "I was particularly struck by the assertion that our communities have long grappled with these issues, as well as how proximate we are to them – a particularly poignant moment in the film comes when one of the participants points out that we are talking about the behavior of fathers and brothers and relatives,” says Cavino.

"One of our elders at home – Mereana Pitman – says that when you violate women and children you violate everyone, including yourself, because of the ways we are interconnected through genealogy,” says Cavino. "Sexual violence is never – for us – only about what happens to the individual, but rather is an assault against the blood – against our ancestors, our children to come, and all with whom we are connected in present time and place.”

Rematriation Magazine sponsored this film for free-of-charge viewing by Indigenous nations, organizations, health care providers, educators, community members and those interested in joining the conversation. You may access “An Indigenous Response to #MeToo” on Vimeo by clicking here. To support similar projects, Rematriation is accepting online contributions at rematriation.com/donate. The Producers are also available for community screenings with discussions.

The film was produced by Indigenous Concepts Consulting for Rematriation Magazine. Executive Producer is Michelle Schenandoah; Co-Producer is Neal Powless; and Director is Katsitsionni Fox. The film features an all-Indigenous cast of community leaders and includes music by Joanne Shenandoah and “The Women’s Power Song” written by the Akwesasne Women Singers.

For more information about the film or to book screenings with discussions in your community, contact Michelle Schenandoah at together@rematriation.com or (315) 925-7191.

How it has differed in Indigenous Communities:
https://medium.com/@Daazhraii/whats-missing-from-metoo-and-timesup-one-indigenous-woman-s-perspective-14a8d9d8cecd

We’ve been working on this a lot longer:
https://impact.vice.com/en_us/article/evbeg7/native-american-women-have-been-saying-a-lot-more-than-metoo-for-years