AP TORONTO — Trans Mountain Pipeline Suspending Work! "Kinder Morgan said Sunday it is suspending all non-essential activities and related spending on its controversial Trans Mountain pipeline expansion project that would nearly triple the flow of oil from Canada’s oil sands to the Pacific Coast. The company said its decision is based on the British Columbia government’s opposition to the project, which has also been the focus of sustained protests at Kinder Morgan’s marine terminal in Burnaby, British Columbia." Here's the live coverage from Saturday, with Chiefs on the frontline at Burnaby Mountain.


Article by Coast Protectors
Censored News
A full-day blockade at Kinder Morgan’s Burnaby construction site today was led by Tsleil-Waututh Elder Ta'ah Amy George and the full executive of the Union of BC Indian Chiefs, which represents more than half the nations, tribes and bands in BC.Grand Chief Stewart Phillip (Penticton Indian Band), Chief Bob Chamberlin (Kwikwasut’inuxw Haxwa’mis First Nation) and Chief Judy Wilson (Neskonlith First Nation in Secwepemc territory) were joined by hundreds of supporters in pouring rain, shutting down work at the facility for the day. A long rolling clap of thunder struck at the same moment as the drummers began  the gathering, prompting cheers from the large crowd of supporters. After hours of blocking both gates to the tanker farm and after it was clear that Kinder Morgan was finished work for the day, Grand Chief Stewart Phillip declared victory:
“Clearly Kinder Morgan is intimidated and fearful of a strong, unified front between Indigenous leaders and our allies. Kinder Morgan was forced not to issue a prerequisite complaint to the RCMP to enable arrests. Without question, Kinder Morgan backed down today. We were here and we will be back. There is absolutely no way that we are letting Kinder Morgan expand its archaic and dangerous fossil fuel extraction. Today we proudly stood with land defenders to send a strong message to Kinder Morgan, its investors, and Trudeau — we will not stand down and we will remain united in our opposition.”
Indigenous leaders and people across Canada and the U.S. have promised escalating action to stop Kinder Morgan's pipeline and tanker project from moving forward. International opposition to the tar sands project is on the rise, and opponents have promised to make sure Alberta Premier Rachel Notley hears that opposition when she promotes Kinder Morgan’s pipeline in New York and Toronto next week.
We're not giving up. We're not going away. This pipeline will never be built.
https://www.coastprotectors.ca/indigenous_leaders_shut_down_kinder_morgan 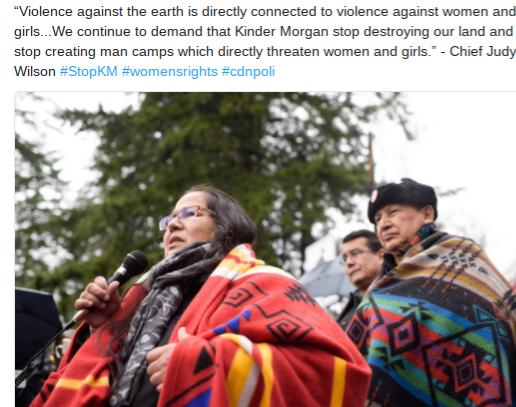 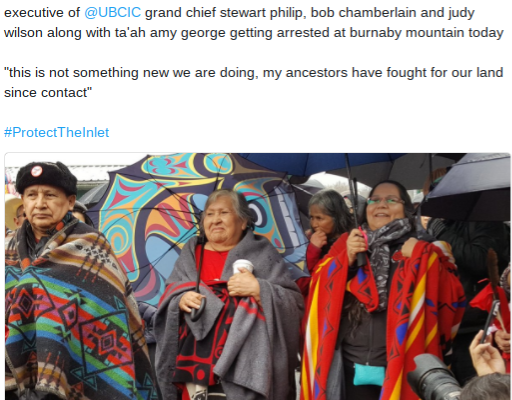 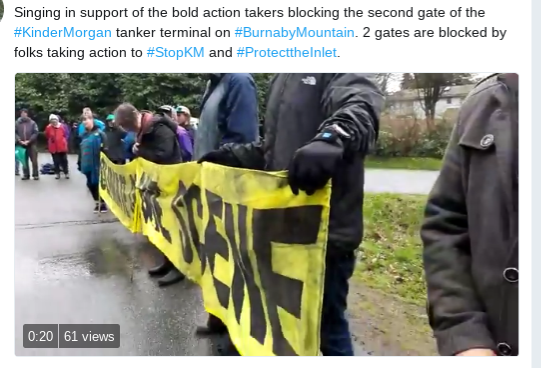 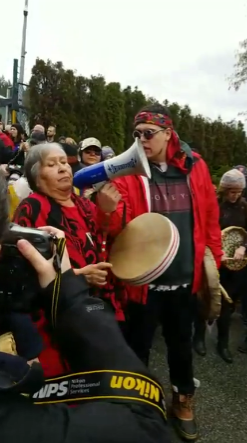 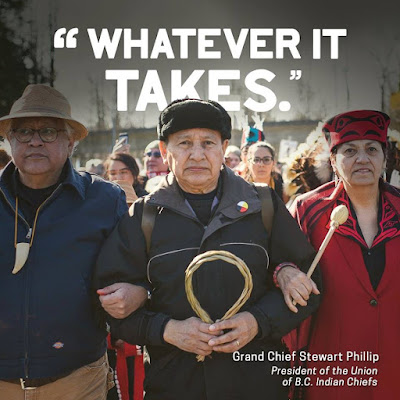 At the gates of Kinder Morgan with land defenders on Coast Salish territory.

Above, on Friday:
“That’s a lie, Justin Trudeau you are a weak leader. This pipeline is not happening. The youth will stand up and stop you”. My son Cedar George-Parker calls out Justin Trudeau at his fundraiser dinner in Vancouver. I am so proud of my son. He is fearless, standing with conviction. -- Rueben George
at April 08, 2018 No comments: 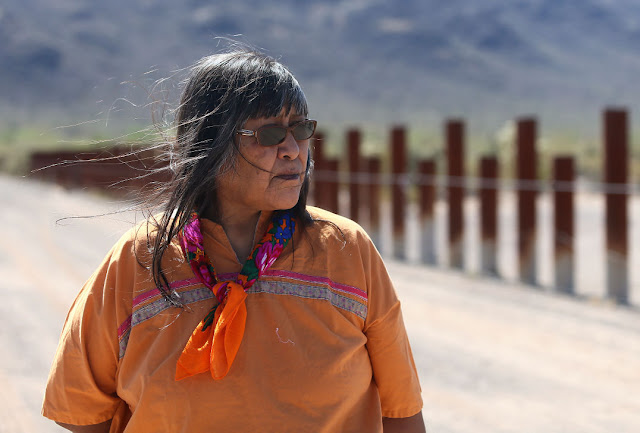 If you missed Ofelia Rivas, O'odham on the border, and Michelle Cook today, you can hear the interview:
https://bsnorrell.blogspot.com/2018/04/oodham-ofelia-rivas-welcome-to-honduras.html 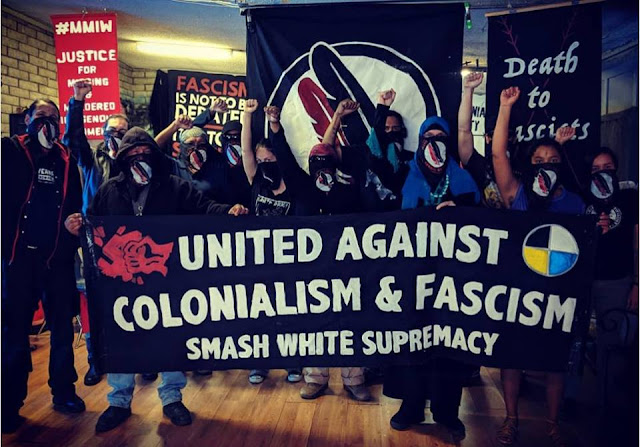 Comrades are free. Ahe'hee' for all the support.
More updates regarding ongoing court support to be announced. #ftp #acab #anticolonial #antifa 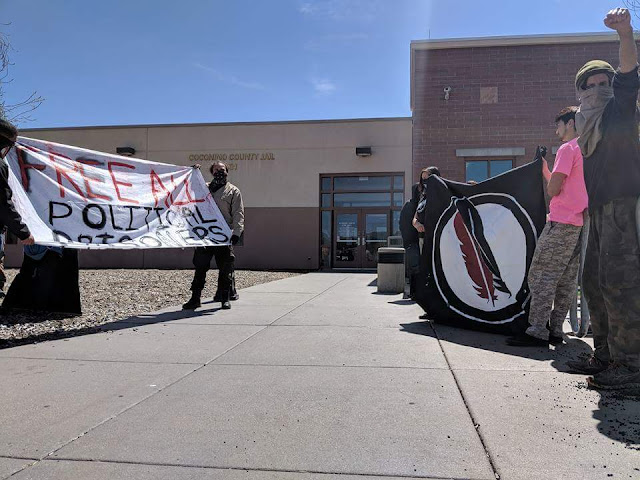 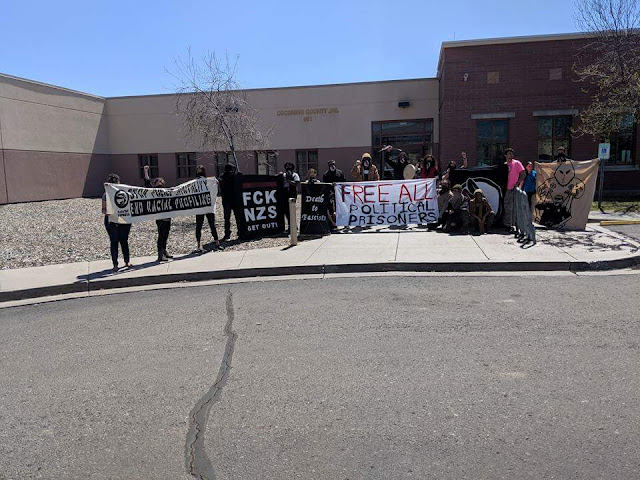 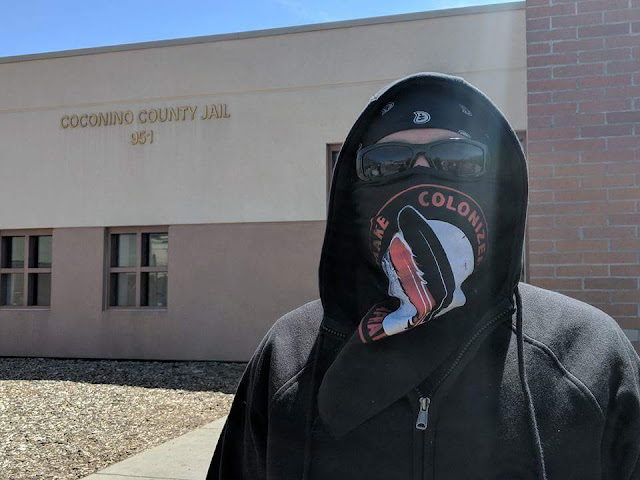 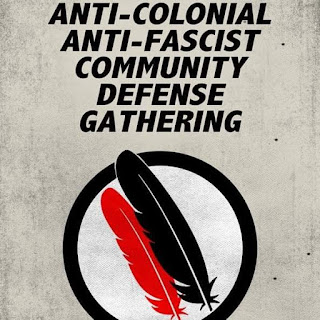 
Native Women to Receive Frank Blythe Award for Media ExcellenceBuffy Sainte-Marie (Cree) and Harriett Skye, Ph.D. (Hunkpapa Lakota) will receive the Frank Blythe Award for Media Excellence on Friday, April 20, at 5:30 p.m. at the Van Brundt Visitors Center during the opening reception for the Seventh Biennial Vision Maker Film Festival. Ms. Sainte-Marie will be present, and Jessica Skye Paul (Nez Perce/Lakota) will accept the award on her mother's behalf. Dr. Skye passed away on January 20, 2018."Both of these women have had a significant influence in the way Native Peoples are seen through mainstream media," said Vision Maker Media Executive Director Shirley Sneve (Rosebud Sioux), "as a young professional, I was deeply influenced by both of them."The reception will be followed by RUMBLE: The Indians Who Rocked the World, which features a significant interview with Ms. Sainte-Marie. She will join Ms. Sneve for a Q&A following the screening at the Mary Riepma Ross Media Arts Center, which adjoins the Van Brundt Center at 313 N. 13th St., on the University of Nebraska Campus.Vision Maker Media recognizes outstanding contributions in advancing opportunities for Indigenous media by honoring an individual or organization. The late Michael Smith (Lakota), founder of the American Indian Film Institute and Festival in San Francisco, California, received the first award. Peggy Berryhill (Muskogee), a pioneer in Native Radio was the second recipient.Ms. Sainte-Marie has spent her whole life creating, and her artistry, humanitarian efforts and Indigenous leadership have made her a unique force in the music industry. In 1969, she made one of the world's first electronic vocal albums; in 1982 she became the only Indigenous person to win an Oscar; she spent five years on Sesame Street where she became the first woman to breastfeed on national television. She's been blacklisted and silenced. She's written pop standards sung and recorded by the likes of Janis Joplin, Elvis Presley, Donovan, Joe Cocker and Jennifer Warnes. She penned "Universal Soldier," the definitive anti-war anthem of the 20th century. She is an icon who keeps one foot firmly planted on both sides of the North American border, in the unsurrendered territories that comprise Canada and the USA.
Dr. Skye, (Makhpiya To Win - Blue Sky Woman), started her career as the editor of The Standing Rock Star in Fort Yates, North Dakota. She went on to host INDIAN COUNTRY TODAY on KFYR-TV from 1972 - 1984. The bi-weekly, half-hour interview program placed prominent Indians before the public to talk about issues from a tribal and political point of view, earning her a loyal following among tribal and non-tribal viewers. Dr. Skye was the editor of the United Tribes News, led the Office of Public Information and hosted weekly radio shows as part of her numerous journalistic endeavors. She advocated for Indian people to tell their own stories and worked tirelessly to make that happen throughout her career. In September of 2016, Dr. Skye was inducted into the Native American Hall of Honor at the North Dakota state capitol. This award is given to Native Americans who have gone above and beyond in representing their tribe and culture. She was a worthy recipient, dedicating her life to Native and women's rights and educational endeavors for Native students. Dr. Skye earned her Ph.D. from U.C. Berkeley and completed her undergraduate work at New York University.The Vision Maker Film Festival runs April 20-26 at the Mary Riepma Ross Media Arts Center. A Producers Lab will enhance the festival with master filmmakers showing their works and participating in workshops, April 22-24. The filmmakers are from the National Minority Consortia of Public Broadcasting, including Black Public Media, the Center for Asian American Media, Latino Public Broadcasting, Pacific Islanders in Communications and Vision Maker Media.Twelve additional filmmakers will attend the festival and be involved in community events in the Lincoln area. For a complete schedule visit: visionmakermedia.org/festival.  Individual tickets may be purchased online at https://theross.org/. All access passes are available for $25.Major funding for the festival comes from the National Endowment for the Humanities, the National Endowment for the Arts, Woods Charitable Fund, the Cooper Foundation, the Nebraska Arts Council and theNorthern Ponca Tribe.
***** 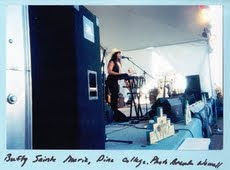 Buffy Sainte Marie described how she was censored out of the music business by the U.S. Presidents, because of her stance against the Vietnam War. This interview in 1999 at Dine' College, which I wrote as a staff reporter for Indian Country Today, was censored for seven years. -- Brenda Norrell, publisher, Censored News

Excerpt:
"I was put out of business in the United States."Later she discovered the censorship and pressure applied to radio stations by President Lyndon Johnson during the Vietnam era, particularly toward her "Universal Soldier" during the anti-war movement.

Read the article, which I published after being censored and terminated at Indian Country Today.
http://bsnorrell.tripod.com/id99.html
at April 08, 2018 No comments: