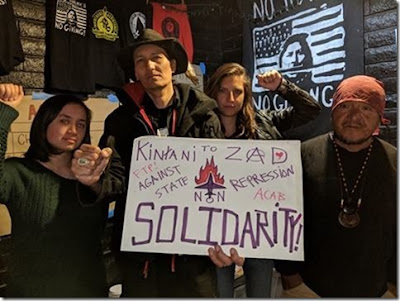 On Monday, April 9, military police with armored vehicles violently attacked the 'ZAD'. This is an area that has been threatened with destruction – to build an international airport – for decades. Farmers and environmentalists have been opposing the project since 1967. 'ZAD' originally meant 'Priority Development Area' [Zone d'Aménagement Prioritaire], but was renamed 'Area to be Defended' [Zone A Défendre] by the opponents.
In January of this year, the French Government decided to drop the airport project. They also warned that people who 'did not belong' to the area – squatters – had to leave before March 31. They claimed that the people 'who did not belong' were just activists looking for troubles and fights with the police. Of course, they would support people with agricultural projects.
On Monday – April 9, 2018 – they launched a very violent attack by military police. They claimed that they had offered the people on the ZAD to present agricultural projects, even 'alternative' agricultural projects, but that those squatters refused to present any project.
The truth is that they asked people to present INDIVIDUAL agricultural projects – which they would easily call 'alternative' if they would grow organic food or have a few solar panels. The people who are now attacked have been trying for years to develop a collective way of life outside of the capitalist society, producing for self-support, not for profit. Thus, a 'revolutionary' project, unacceptable for a capitalist society.
I don't know in how far they managed to be revolutionary, but one thing is evident: the capitalist dominated world only recognizes private or 'national' property, certainly not collective or community property. (Of course, it also applied to so-called 'collective' property in the late so-called communist countries, where 'collective' property meant State property, on which people were just workers, like those working for capitalist private firms). Thus, collective projects would have been rejected anyway.

I am very thankful for the support immediately expressed by people from abroad. It is no surprise that it first came from Palestinians and Native Americans. Much of their land has been stolen by colonialists on the ground that it was not private property (but collective use): if it was not private, it was THUS 'national', and the State could sell it to settlers or private firms. It is still going on now.
The present French government, under that Macrump President, is madly capitalist and will certainly not accept anything else than private property.