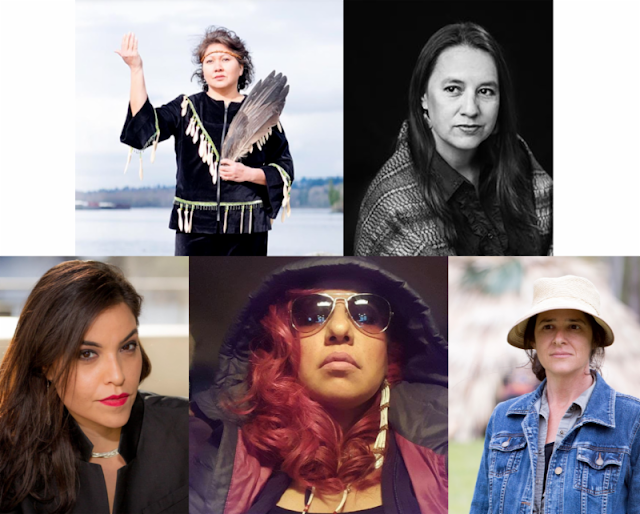 Mohawk Nation News
MNN. Apr. 16, 2018. Iroquois Quack’ers [also known as the Iroquois Caucus] is carrying military designed attacks against their own people called the “naturals”, the real kanionkehaka!
http://mohawknationnews.com/blog/2018/04/16/to-the-shameless-iroquois-quackers/
at April 16, 2018 No comments: 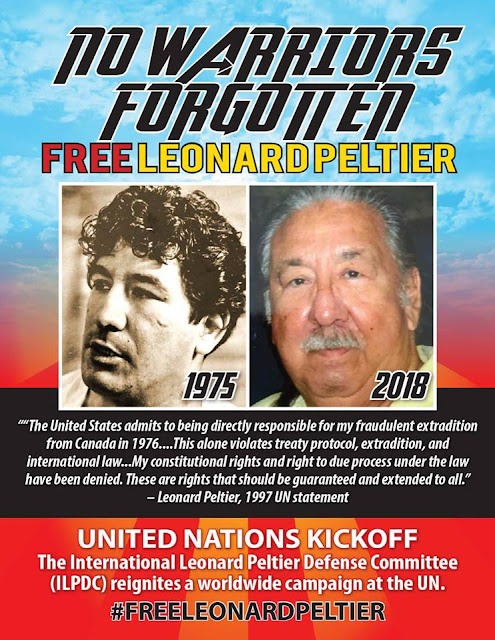 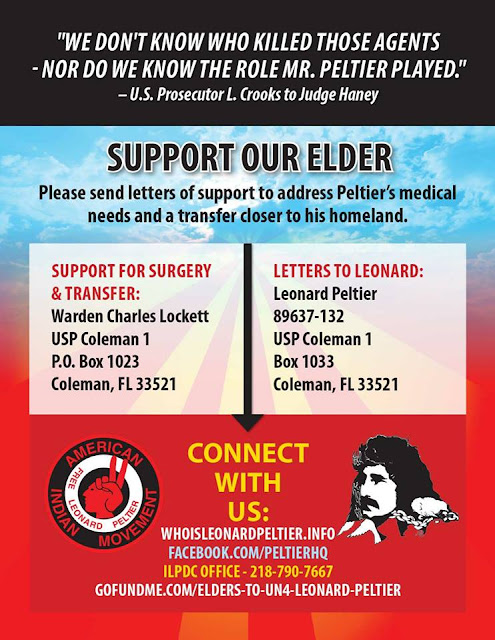 "It is time for Leonard Peltier to be with the Tiospaye.
Forty-three years in prison -- we need justice."
Jean Roach, Lakota, with Yvonne Swan, Colville, at United Nations. 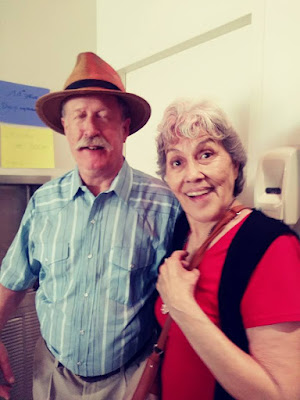 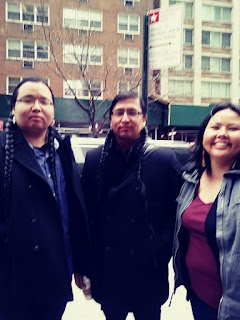 Risking shoot-to kill to stop the killing machine -- Beyond Nuclear

Posted on April 16, 2018 by beyondnuclearinternational

The Nuns, the Priests and the Bombs is a new film about old style non-violence

By Linda Pentz Gunter
Would you be willing to put your life on the line to make a moral statement about the iniquity of nuclear weapons? I am willing to bet that most of us, however strongly we feel about the need to abolish the Bomb, would not walk peacefully into a shoot-to-kill zone at a nuclear weapons complex just to make a point.
But when it is a point of conscience, of morality, and of faith, that is exactly what members of the Plowshares movement will do. And have done. For decades.
Seven of them just did it again, as they always say they will. Arrest them, try them, convict them and jail them, but their determination and moral conviction will not be eroded. They are repeat offenders. But they do not come to offend.
So on April 4, 2018, the anniversary of the assassination of peacemaking leader, Dr. Martin Luther King, the self-styled Kings Bay Plowshares entered the King’s Bay Naval Base in St. Mary’s, Georgia, the largest submarine base in the world. As had their colleagues before them, they carried banners, statements, hammers and blood. They were arrested, then denied bond during a preliminary hearing on April 6. 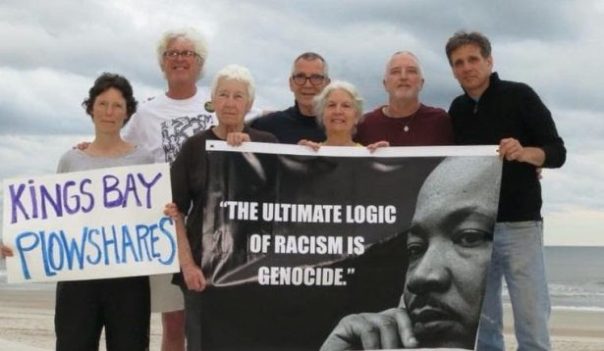 The seven members of the Kings Bay Plowshares, who entered the Georgia naval base on April 4 to protest nuclear weapons, white supremacy and racism. (WNV/Kings Bay Plowshares)
The Plowshares movement, rooted in Christian faith, began in 1980 when Daniel and Philip Berrigan and six others broke into a General Electric nuclear missile facility in King of Prussia, Pennsylvania, hammered on the nose cones of nuclear missiles and poured blood onto documents and files — symbolically beating swords into plowshares. Philip’s widow, Liz McAlister, was among the Kings Bay activists just arrested.
These actions have been captured most vividly in a new film by Helen Young — The Nuns, the Priests and the Bombs.  It tells the stories of two groups of Plowshares activists — in Tacoma, Washington and Oak Ridge, Tennessee — who cut through fences and tested (as it turned out the less than adequate) defenses at two US nuclear installations to challenge the legality and morality of the death factories within. The film is currently being screened at venues around the country. The screening schedule can be found here.
The first half of the The Nuns, the Priests and the Bombs, tells how five activists, calling themselves Disarm Now Plowshares, ventured onto the Kitsap-Bangor Naval Base outside Bremerton, Washington, where the US Trident nuclear missiles are stored. The group consisted of a nun, Anne Montgomery, two priests — Bill “Bix” Bichsel and Steve Kelly, —  Susan Crane,and  Lynne Greenwald. The youngest was 60 at the time and the oldest 83.
They wandered the site for several hours without apprehension, reaching the actual missile bunkers before they were stopped and arrested. They brought wire clippers, hammers, banners and their own blood. But no bad intentions.
The trial brought home not only the shocking security lapse, but the terrifying destructive power that could be unleashed on the world were the Kitsap inventory ever to be used. 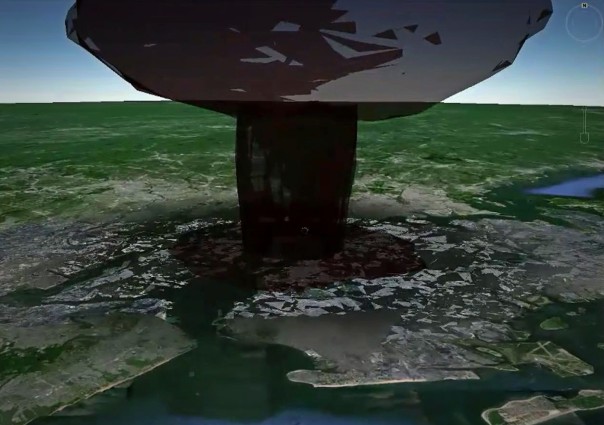 Graphic from the film showing the enormity of a Trident missile attack.
None of the five pled innocent. They meant to break in. This led jurors, also featured in the film, to face a dilemma of justice; whether to uphold the law or common sense. In the end, the jurors tried the case before them and convicted the five. But a least one, interviewed in the film, articulates the inner conflicts they experienced during the trial.
The case was the same when a trio of similar peace activists successfully entered the “Fort Knox” of the US nuclear weapons complex  —the Y-12 National Security Complex in Oak Ridge, TN. Once more, the activists were no youngsters — 82-year old nun, Megan Rice, 63-year old Vietnam veteran, Michael Walli, and 57-year old house painter, Greg Boertje-Obed. And once more they successfully penetrated deep into the site, cutting fences and hanging banners until one experienced guard, who understood they were peacemakers, stopped them without using lethal force.
Rice disputes that they broke the law at all. After all, are laws not supposed to protect people and act in their best interest? If they fail to do so, are they even laws? If not, then they cannot be broken. A law that protects and perpetuates a place that manufactures enough destructive power to kill everyone on Earth many times over does not seem to Rice to constitute a law. She, Walli and Boertje-Obed were given harsher sentences than their Tacoma counterparts. By then, it was felt, the red-faced government was losing patience with these repeated security embarrassments.
These activists, some now deceased, describe eloquently in the film what compels them to act. It is quite simply that they have tried everything else. They have written letters and lobbied and signed petitions. And prayed. And yet, nuclear weapons are still here. As former US Attorney General, Ramsay Clark, who testified for the Tacoma defendants, says in the film when asked if that group’s actions were justified:
“I think their acts were justified. I think they might even be required.”
Read the official film synopsis
at April 16, 2018 No comments: