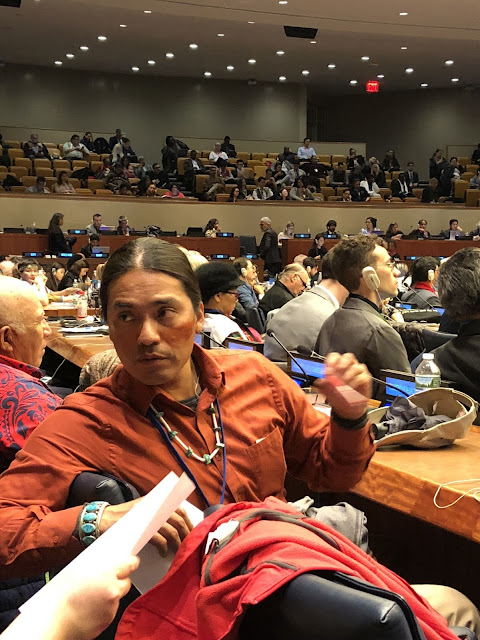 “Indigenous communities all over the world, including in the United States, are seeking to protect our cultural landscapes. Bears Ears National Monument was reduced in violation of our human rights. If this action stands, it sends a signal that any protection of land sacred to indigenous peoples may also be at risk.” Angelo Baca, Community Resource Coordinator, Utah Diné Bikéyah, addressing U.N. Permanent Forum on Indigenous Issues in New York.

My relatives, I greet you with a good hearted handshake. My name is Jean Roach from the Mnicoujou Lakota Nation. I am a survivor of the 1975 Oglala Firefight for which Leonard Peltier is illegally imprisoned

We come to the United Nations today with prayers of HOPE and we are asking for International support for FREEDOM and JUSTICE for our Indigenous elder, brother and human Rights Defender Leonard Peltier.  After 43 years he needs to be FREE!

We are the Indigenous grandmothers and mothers of Turtle Island also called North America. For generations we are life givers and protectors of our families and elders. Our family circles live in harmony with our Mother Earth.  We are ONE with the land. Our “original instructions” from the creator is guided by the stars, we pray for Mother earth and her existence,. We are only guilty of protect our Mother Earth and our Nations!

Our brother Leonard Peltier has been incarcerated to prison for a crime the United States (US) has admitted to fabricating by presenting false information. They broke their own laws to ensure this attack on our sovereignty and to break up our families and our ties to our land!

Documents obtained under the Freedom of Information Act show that evidence used to convict Peltier was manufactured, coerced and falsified.

Leonard said: “The FBI files are full of information that proves my innocence; many of those files are still being withheld from my legal team. During my appeal before the 8th Circuit, the former Prosecutor Lynn Crooks said to Judge Heaney, ‘…we do not know who killed our agents. Further, we don’t know what participation, if any, Leonard had in it’. That statement alone exonerates me, I should have been released, but here I sit, 43 years later still struggling for my Freedom! I have pleaded my innocence for so long now, that I will not argue it here. But I will say again, I DID NOT KILL THOSE AGENTS!”.

In November 2003, the US 10th Circuit Court of Appeals acknowledged that “Much of the government’s behavior at the Pine Ridge Reservation and its prosecution of Leonard are to be condemned. The government withheld evidence. It intimidated witnesses. These facts are not disputed.”

In 1975, on the Pine Ridge Indian reservation, Leonard and other members of the American Indian Movement (AIM) were asked by Lakota Elders to “help” their community to assert their “sovereign rights” to become an independent community from a corrupt, imposed tribal government.

During this time period, known as the reign of terror, in the aftermath of the 1973 Wounded Knee Takeover, many traditional and AIM people were attacked daily and many killed because of their beliefs. These elders wanted change and were holding meetings to make these changes towards a traditional government and the right to worship in our Lakota ways.

Leonard Peltier along with a small group of men, women, and children were at Oglala, South Dakota as guests of an elderly couple named Harry and Cecilia Jumping Bull when they were surprised by gunfire. This firefight, started by the FBI, lasted for several hours and one man was shot and killed. His name was Joe Stuntz who was a father of two children from the Coeur d’Alene Reservation in the state of Idaho. No one was charged for his death.

Two FBI agents who drove into the Jumping Bulls home in separate cars died as a result of their attack on the people living there.  Four men were charged with their deaths—one was let go, two were tried Darrel Butler and Robert Robideau and won because it was determined an act of “self-defense”—and that left Leonard Peltier to blame. The gross misconduct of the FBI, and BIA police also was cited as a contributing factor to the acquittals of his co-defendants. Why was he pursued so intensely when his co-defendants were acquitted on the basis of self-defense? Because the US wants to keep us busy, so they can extract minerals and other natural resources from our motherland. The idea is to separate us physically and spiritually from our land.

The elderly couple was not at home and enemy gunfire riddled their house with bullets. Had the group of Indigenous people been in the home, none of us would be here today asking for help because Leonard and all of them would have been massacred. Fortunately, the surviving group managed to flee.
Leonard Peltier was pursued by police before the firefight at Oglala and knowing he couldn’t trust the US court system, he fled to Canada.  The FBI agents were determined to have him extradited. They abused and threatened a Lakota woman, Myrtle Poor Bear, and forced her to be the “eye witness” and a so-called “girlfriend” in affidavits when she had never met Leonard.  She later wanted to tell the truth but was not allowed to testify at his North Dakota trial.

Last summer, Leonard Peltier had a triple bypass heart surgery because of the prison’s denial of proper medical treatment. He suffers from a prostate condition diagnosed two and a half years ago and is being denied surgery. He also has diabetes, an aortic aneurysm that could rupture at any time, arthritis in his hip and leg, and vision problems.

He has more than completed the two consecutive life sentences, yet the FBI won’t allow him to be released. According to 1976 law a sentence was considered 7 year a total of 14 years which Leonard served 3 times the sentence. This is torturous inhumane treatment of an innocent Indigenous man who represents all of us.

Leonard Peltier has been denied multiple requests for transfer to a Federal Correctional Institution in Wisconsin. Leonard is now a great-grandfather whose health and well-being deteriorates daily because of being confined without adequate medical attention, without natural foods and spiritual medicines.

The Bureau of Prisons Program Statement (5100_008) clearly requires that an inmate be placed within a 500-mile radius of their home, Leonard Peltier is incarcerated in Coleman, FL more than 2,000 miles from his home on the Turtle Mountain Reservation in North Dakota.  Leonard Peltier is 73 years old has recently endured heart by-pass surgery and suffers from other health ailments. Among the US Bureau of Prisons considerations for transfer is the medical care of the inmate.

The denials are inconsistent with the Bureau of Prisons own guidelines and procedures for determining an inmates’ location or for consideration of reasonable transfer requests. The multiple denials of transfers as well as the placement of Leonard Peltier more than two thousand miles from his home, first in Pennsylvania and now in Florida appear punitive in nature due to the status Leonard has among large segments of Indigenous communities as a respected elder, Indigenous Human Rights Defender, and hero

We respectfully request the 17th UNs Permanent Forum on Indigenous Issues to appoint Special Rapporteur Ms Victoria Tauli-Corpuz visit the US to study the Department of Justice’s actions that are based on “racial discriminations” and “double standards” to investigate the case of Leonard Peltier! He’s the longest held Indigenous Human Rights Defender and political prisoner in the WORLD!  43 Years!

We ask the Special Rapporteur to make a personal visit to Leonard inside the US Penitentiary in Coleman, Florida, and to make a report  before the next 18th United Nations Permanent Forum session.

Finally, we call upon the Expert Mechanism on the Rights of Indigenous Peoples to propose to the Human Rights Council to consider initiating a research study on Indigenous Human Rights Defenders, such as Leonard, who are being held prisoners for defending their lands, territories and natural resources.

NEW YORK -- The family of Colten Boushie, 22-year-old Cree, demanded justice for Colten at the United Nations Permanent Forum on Indigenous Issues, as they described the systematic racism in Canada that resulted in the victimization of Colten even after he was murdered by a farmer.
Eleanore Sunchild describes the moment, in the photo, above.
"This moment was so unbelievable. The UNPFII closed the speakers because they ran out of time. It was the end of the day. Debbie stood up and held up Colten’s picture. They made an exception and let Jade speak. Indigenous delegates from around the world stood up in solidarity with us. After the speech, they shut down the UN proceedings and the Rapporteur and then UNPFII President came down to speak to our delegation. Everyone was crying. It was amazing. The Creator was with us. The world heard us!"
CBC Canada reports, "Family members of Colten Boushie delivered a fiery call for justice at the international table Wednesday, as they called for the United Nations to undertake a study of systemic racism against Indigenous people in Canada's judicial and legal systems.

"The Canadian justice system has failed Colten, our community and Indigenous people in ways that impedes our human rights," Jade Tootoosis, cousin to Boushie, told the United Nations Permanent Forum on Indigenous Issues, describing this failure as one of the state to uphold treaty rights. "We deserve better. My brother Colten deserves better." http://www.cbc.ca/news/canada/saskatchewan/colten-boushie-family-united-nations-study-systemic-racism-1.4625818
In the video below, Jade Tootoosis, appeals to the United Nations, describing the systematic racism in Canada. She describes Colten as a firefighter and a kind person, who was failed by the Canadian Justice System.
Jade describes how Colten was shot in the back of the head by a settler famrer. The family was treated like criminals.
Justice is not equally applied to Indigenous Peoples in Canada.
Colten Boushie was a 22-year-old from Red Pheasant Cree Nation in Saskatchewan. 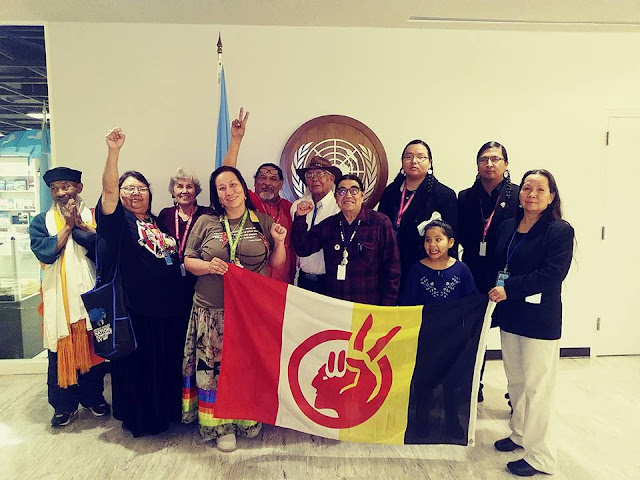 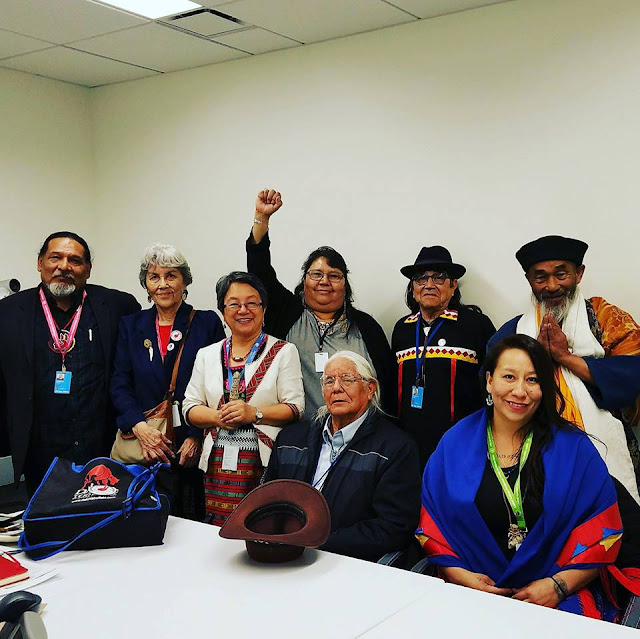 
https://www.whoisleonardpeltier.info/home/events/
at April 19, 2018 No comments: