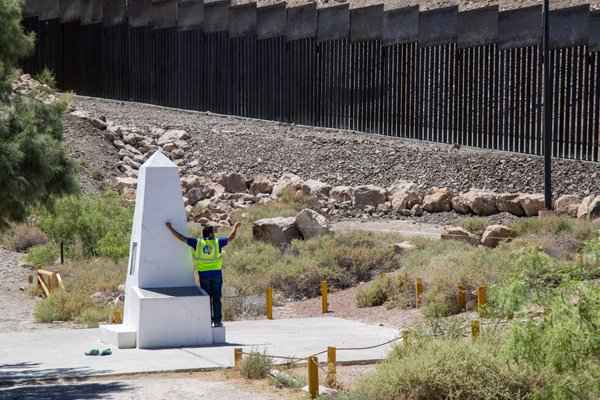 By ACLU New Mexico
MEDIA CONTACT
Micah McCoy, (505) 266-5915 x1003 or mmccoy@aclu-nm.org
Censored News
June 7, 2019
SUNLAND PARK, NM - Today, the American Civil Liberties Union (ACLU) of New Mexico called on the International Boundary and Water Commission (IBWC) to block We Build the Wall, a crowdfunded organization led by anti-immigrant extremists Steve Bannon and Kris Kobach, from constructing a private border barrier across public property administered by IBWC. We Build the Wall recently announced that it had constructed a steel gate across a federally owned road adjacent to the private parcel of land where they have constructed a half-mile section of steel border fence. The gate, which was installed prior to receiving proper permits from IBWC, blocks access to public land containing Monument One, a monument listed on the National Register of Historic Places which has marked the international boundary between New Mexico, Texas, and Mexico since 1855.


“The border wall has always been a monument to xenophobia and racism and an environmental disaster for the Southwest region,” said ACLU of New Mexico Executive Director Peter Simonson. “That’s why congress has steadfastly rejected implementation of president Trump’s bigoted vanity project. Now, We Build the Wall, working alongside armed vigilantes, is attempting an end run around the will of the American people by erecting barriers on public lands without a permit. This lawlessness has no place in our country, and must be reversed immediately.”
In late May, Florida based We Build the Wall began construction of an 18 ft high steel border fence in late May on private land owned by the American Eagle Brick Company adjacent to the U.S. - Mexico border in the City of Sunland Park, New Mexico. Throughout the planning and implementation of the fence’s construction, We Build the Wall appears to have closely coordinated with the armed vigilante group United Constitutional Patriots (UCP), using them as security to prevent journalists from accessing the site via the adjacent public road that leads to Monument One.
A spokesperson from We Build the Wall announced the gate’s construction on June 3, 2019, claiming that IBWC Commissioner Jayne Harkins had given “permission” to construct the gate and a photo posted on June 5th by one of the UCP vigilantes shows its completion. The ACLU of New Mexico subsequently reached out to the IBWC and learned that at the time of the gate’s construction no permit had been granted.
“Cutting off access to Monument One, a historical monument on the national register that has served as a symbol of unity and friendship between the United States and Mexico for over 100 years, is a slap in the face to those of us who call the area home,” said Nia Rucker, Policy Counsel for the ACLU of New Mexico Regional Center for Border Rights in Las Cruces, NM. “This outside group is unilaterally locking border communities out of their own culture and history for the sake of a PR stunt. If this is allowed to stand, it will set a dangerous new precedent and commit irreversible damage to our beloved borderlands.”
The ACLU of New Mexico is making the following demands of IBWC:
Posted by Censored News, publisher Brenda Norrell at June 10, 2019