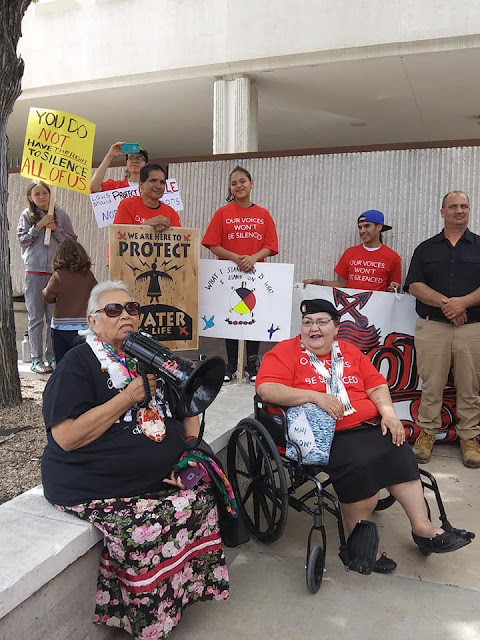 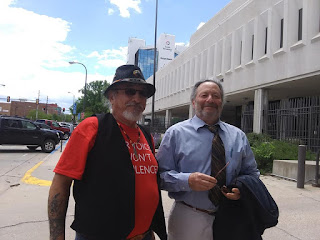 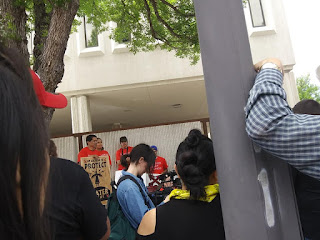 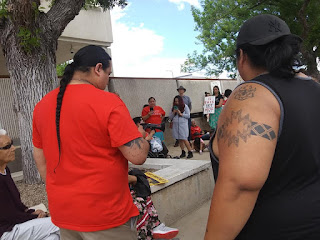 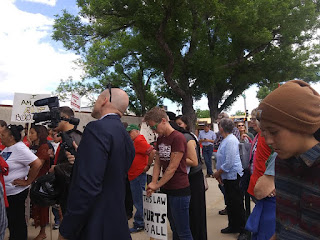 
'Protecting the Protectors' -- Challenging the Ridiculous 'Riot Booster' Law in South Dakota
Photos by Jean Roach, Lakota
Article by Brenda Norrell, Censored News
RAPID CITY, South Dakota -- The American Civil Liberties Union told a federal district court that South Dakota's three so-called "riot boosting" laws are unconstitutional and violate the First and Fourteenth Amendments of Free Speech and Assembly.  In federal court on June 12, the ACLU asked the court for an injunction so the measure does not go into effect on July 1.

The state legislature, fearing more of the power of the Standing Rock resisters, passed the laws this past session. South Dakota legislators apparently live in fear of what might happen if the Keystone XL Pipeline comes through and threatens to poison the water source of millions.
Outside the federal courthouse, resisters challenged the so-called "Riot Booster" law in South Dakota. Jean Roach, Lakota, said the law is a "direct violation to the Freedom of Speech."
In the courtroom, Jean said, the South Dakota state's attorney was confused about the interpretation of the bill. The federal judge questioned the actual wording of the bill compared to another version.

"Hilarious at times the judge would tell the state's attorney to 'slow down' and asked him several times to repeat himself," Jean said.
"The attorneys for ACLU called parts of the bill as a 'funding' source for Trans-Canada. The bill is poorly written and the judge asked the state's attorney who authored the bill. No one knows who actually wrote it," Jean said.
"ACLU attorney guessed Trans-Canada wrote it!"
"Quite a hearing!"

The ACLU said earlier: The new law gives the state the authority to sue individuals and organizations for “riot boosting,” but it does not clearly describe what speech or conduct it considers to be “riot boosting.” The law is written so broadly that even a tweet encouraging activists to “Join a protest to stop the pipeline and give it all you’ve got!” could be interpreted as “riot-boosting” should a fight break out at the protest. The law joins two existing state criminal laws that also target such speech, meaning that advocacy could now result in up to 25 years of prison time, fines, or civil penalties — or a combination of all three.
Read more from the ACLU
More in the news:
The so-called "riot boosting" law was passed by the South Dakota Legislature and states that someone who "direct(s), advise(s), encourage(s) or solicit(s) any other person participating in the riot to acts of force or violence" can be found liable for triple the cost of damages incurred by the state, a local government or "an otherwise damaged third party," such as TC Energy (previously TransCanada).