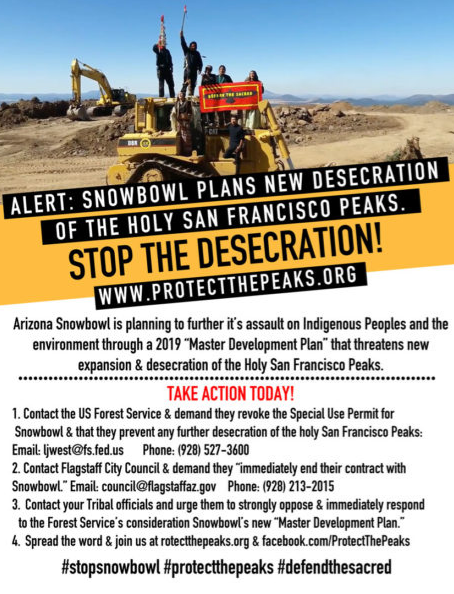 By Protect the Peaks
Censored News

FLAGSTAFF, Arizona — Controversial ski resort Arizona Snowbowl is planning to further its assault on Indigenous Peoples and the environment through a “Master Development Plan” that threatens new expansion and desecration of the Holy San Francisco Peaks.
Snowbowl representatives have been holding secret meetings with area politicians to secure political support for their new plan yet have not met with any Indigenous Nations. Although details of the new plan have not been released, Snowbowl has revealed that it is considering new facilities, new lifts, 5 new trails, night skiing, and a tubing facility.


Snowbowl’s year-round desecration proposal concepts include “a mountain coaster, an alpine slide, zip-line tours, mountain biking, expanded disc golf, a climbing wall, & outdoor concerts.”
Snowbowl has stated that they intend on submitting their expansion plans to the US Forest Service summer 2019. This would initiate the National Environmental Policy Act (NEPA) process and require some form of public participation & comment, which Snowbowl anticipates occurring as early as fall 2019. Snowbowl also states, “The earliest implementation of the proposed projects would occur in 2021.”
In a document titled “Arizona Snowbowl Shares Vision for Next Chapter,” ski area owner James Coleman of Mountain Capital Partners stated, “We are guided by our mission ‘Skiing First’.”
The San Francisco Peaks are located in Northern Arizona and managed by the Coconino National Forest Service as public lands.
The Peaks have been held holy since time immemorial by the Diné (Navajo), Hopi, Zuni, Tewa, Haulapai, Havasupai, Yavapai-Apache, Yavapai-Prescott, Tonto Apache, White Mountain Apache, San Carlos Apache, San Juan Southern Pauite, Fort Mcdowell Mohave Apache, and Acoma.
For decades Indigenous Nations & environmental groups have filed multiple lawsuits to stop ski area expansion. These cases have shaped legal precedent for Indigenous religious freedom and sacred sites.
After court cases failed and numerous direct actions were taken, Snowbowl clear-cut new runs, built new lifts, and became the first ski area in the world to make fake snow from 100% treated sewage effluent. Snowbowl is currently allowed to use 180 million gallons of treated sewage per season by the US Forest Service. Although environmental groups have cautioned that the treated effluent is contaminated with pharmaceuticals, hormones, and anti-bacterial resistance genes, the City of Flagstaff maintains a contract to sell the wastewater to the ski area.
“Snowbowl, the Forest Service, & City of Flagstaff make a profit by killing Indigenous cultures,” states Klee Benally, volunteer with ProtectThePeaks.org, “We must stop Snowbowl’s assault on our cultural survival and further ecological destruction. The National Environmental Policy Act and courts have failed us before, we must not fail our ancestors and coming generations.”
#stopsnowbowl #protectthepeaks #defendthesacred
TAKE ACTION:
Posted by Censored News, publisher Brenda Norrell at June 09, 2019